Five outstanding animated works, widely awarded and loved at festivals worldwide, all worthy of taking the top prize at ASIFA-Hollywood’s 49th annual celebration of the best in animation, coming March 12. 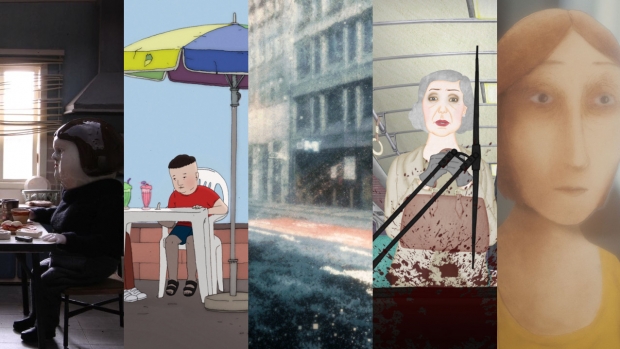 The Best Short Subject nominees for the 2022 Annie Awards feature five outstanding animation works that were widely awarded and loved at international animation festivals. Any one of these films is worthy of taking home the top prize. Let’s take a peek inside each of the films vying for a shiny trophy and silent applause (it’s all online again this year – click here to watch Saturday, March 12 at 7 p.m. PST). An unknown woman sits on a plane. As the camera zooms in on a hole on the side of her head, we travel to another time and space in the woman’s life. She plays fetch with her German shepherd, examines her body in the mirror, makes herself breakfast, and then heads off on a tram with her dog to work. It’s all quite charming, tranquil, and normal.

Except, she tortures and kills people for a living.

Using porcelain and felt figures, this masterful stop-motion film takes us inside the domestic life and (literally) cracked mind of a secret police agent. Set during Chile’s military dictatorship, we follow the stone-faced agent’s conflicted and twisted existence as it skirts between her loneliness, an uncomfortably intimate relationship with her dog, gory nightmares, concerns about her body image, and the constant sense of imminent doom that envelops her.

Inspired by actual events and modelled after Ingrid Olderock, a ruthless agent and self-proclaimed Nazi, who tortured female detainees while working under the Pinochet dictatorship, Bestia is as much a character study as a portrait of a troubled and volatile period in Chilean history.

The deadpan storytelling and character design, along with the quiet, suspenseful, and at times Keatonesque tones, mixed with this almost casual, placid pace, make this one of the most pleasantly startling films of the last year in animation. Ah, the lazy summer day. Two twit teenagers, Kevin and Jason, sit drinking milkshakes. A nearby car crash doesn’t faze them. They’ve got a mission. Mr. Ping, a local Chinese restaurant owner, has committed suicide in his large exotic bird cage. Many valuable birds have escaped. If the boys could find and sell some of those winged wonders, they could score a brand-new mountain bike. They head out to the vacant Chinese restaurant to find some birds.

Beavis and Butthead vibes aside, Easter Eggs is a tender coming-of-age tale about loneliness, insecurity, and the beautiful oddities of friendship. Kevin is a buzz-cut adorned, peach fuzz moustached smoker who aims to be stronger than his father. Jason is the insecure kid, desperately trying to fit in (he drinks a milkshake knowing he has allergies and cuts his hair in the same style as Kevin’s).

Beneath the seemingly simple surface, Easter Eggs is a moving study of alienation, of people trying desperately to connect as they seek out small wonders of life in an otherwise humdrum existence. On March 22, 2016, a bomb detonated in the Maalbeek Metro station in Belgium. More than 20 people died and over 100 people were injured. This terrorist attack came just after two attacks took place at the Brussels airport.

Maalbeek follows Sabine, one of the survivors of the explosion. As she heads to work that day, the explosion sends her into a coma. When Sabine emerges from the coma, she has no memory of the explosion. In order to fill this gap, she obsessively seeks out images, videos, and stories of the event that might reawaken her memory. But is this a good thing? As the fireman who rescued her tells her, you have to lock those memories away and not dwell on them. Of course, she has no memories to lock away.

When Sabine goes to bed one night, a brief image of herself moments before the blast flashes through her. She is not sure what to think. Is her memory crawling back to her or was this image created from all the media she devoured? Like Sabine, we are left asking ourselves: Is it better to have no memory or a memory that is not your own?

Visually, the use of a sort of mid-explosion particle/sand animation look (it’s not, it was all made on a computer) gives the films this menacing fragility. Fusing documentary, collage, and experimental film, Maalbeek is a multi-layered ghost story that explores the complexities of memory in an age when we are drenched in media images. A windy night. A monkey and her youngling enjoy pomegranates. A couple embrace in the shadows of a room. Workers wait at a local bus station. A man and his pregnant wife emerge from a bathroom. Joined by a smug old rich lady, this group of people all come together on the last bus ride of the day. A sleepy late-night ride soon turns into chaos when the old woman’s necklace goes missing. The theft triggers a barrage of accusations that uncover betrayal and murder.

With a deliberate leisurely pace (like a slow cooker, Hsieh has said), Night Bus unravels like a cross between the who-done-it of Agatha Christie, the rapid-fire gore of Quentin Tarantino (who also loves to toss strangers into a room together just to see what happens!) and just a dash of Alfred Hitchcock and a pinch of melodrama.

Yet, gore and horror aside, at its core, Night Bus is about revenge, redemption, and the slippery nature of human relationships. Hsieh’s stiff cut-out character design belies the fluid and deceptive nature of the bus riders. In the end, no one is quite what they seem to be. For days, Franc has been working on Liza’s birthday dinner. When the big day comes, Liza stays behind at work when her colleagues throw her a surprise birthday celebration. Meanwhile, back at home, Franc’s plans unravel. The meat is overcooked, the apartment is filled with smoke, and Franc’s rage simmers inside. When Liza finally arrives home, the apartment is filled with blinding smoke. Will Franc be able to hold his tongue?

On the heels of her masterful and darkly comic portrait of addiction, Nighthawk, Špela Čadež takes a gaze at the theme of psychological abuse, an often-neglected side of violence that’s been overlooked or just outright ignored because there are no visible bruises. "Concealment is its greatest strength," Čadež writes in her director's notes. It leaves no bruises, fractures, blood, but devastated souls. "

Čadež’s multiplane technique using oil paint cells along with paper cut outs exemplifies the tensions, dualities, and layers of this couple. The opening shot of Franc examining both sides of a spoon is a subtle reflection of the duality of his personality. The smoke scene and the accompanying sounds of the radio, the sizzling of the meat, and the various sounds of kitchen utensils all add an element of realism, inviting, or rather, luring the viewer into this troubled private space.

Čadež resists judgement or a clear conclusion. As Liza gazes out from her small apartment, we have no idea if she will finally flee this abuse or maintain the hope that Franc can change, that they can change.

Who should win?  I have no idea. There’s not a dud to be found here.

Taking an Old-School VFX Approach in ‘All Quiet on the Western Front’
‘Natural Habitat Shorts’: Like ‘Ranger Rick,’ But for Adults
Framestore Sets Sail on ‘1899’ with New Virtual Production Tools
Animated Characters: The Art of Babbitt – Part 1
Bruce Smith and Ralph Farquhar Talk ‘The Proud Family: Louder and Prouder’ Season 2
VFX is the ‘Thing’ for Tom Turnbull on Tim Burton’s ‘Wednesday’
We Need to Chat
F is for Flake: The (Not So) Great Animation Robbery?
END_OF_DOCUMENT_TOKEN_TO_BE_REPLACED