The Unreal Reality of ‘Undone’

Co-creators Kate Purdy and Raphael Bob-Waksberg talk about the long-awaited second season of their mind-bending Prime Video series, including how they distill life’s mysteries into the narrative, and production lessons learned on ‘BoJack Horseman.’ 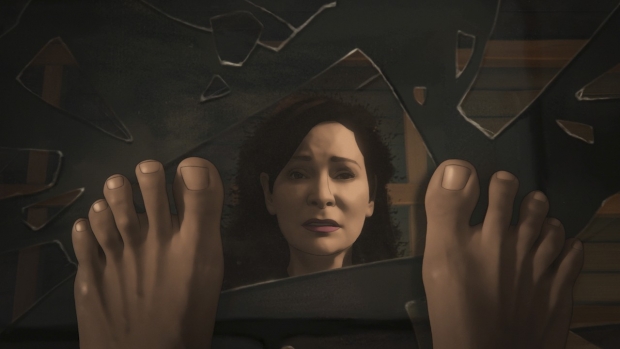 Now in the midst of its long-awaited second season, Undone continues its run as one of the most creative, visually captivating, and mindboggling animated series ever to stream its way into the zeitgeist. Created by Raphael Bob-Waksberg and Kate Purdy, who previously worked together on Bob-Waksberg’s award-winning BoJack Horseman, the rotoscoped series stars Rosa Salazar as Alma, a woman badly injured in a car accident who later discovers that she can travel through time. But Alma’s cool new capability comes with some unfortunate baggage in the form of  her deceased father (Bob Odenkirk), who instructs Alma in the finer points of time travel, hoping that she’ll not only discover who murdered him, but perhaps even save his life.

For anyone who appreciated the often hysterically funny, unrelentingly dark, and frequently simply weird (in the most deadpan way) masterpiece that was BoJack Horseman, it will come as no surprise that Bob-Waksberg and Purdy have come up with another ambitious and unconventional narrative that explores some of the more recondite questions – big and small – that go along with being human.

In the hope of learning more about the journey that brought them to Undone, the ways in which it’s similar to and different from BoJack, and exactly what the true nature of reality is, we conversed with the creators about their creation.

AWN: We've been waiting so patiently and now Season 2 is finally here! What took so long?

Kate Purdy: Thank you for waiting. The pandemic slowed us down a little bit. The show takes about a year and a half if everything is going perfectly. It's just the longer production process because it's handmade – hand drawn and hand painted and…

KP: Well, there are some computers involved. But it just takes longer, and then with the pandemic, we were slowed down even more. So it took us an extra year. AWN: In a previous AWN article about Undone, you said that the two of you had a lot of fun walking around philosophizing, talking about life and why things are the way they are. How do you take such cerebral ideas and distill them into something that can be part of a show like this?

RB-W: It's one of those things where once you know it, then you can forget it. We keep these ideas and philosophies and thoughts and arguments in the back of our heads, and then we dive down into the character in the story and go, “Okay, what's happening to Alma now and what does she need to do to get through this? What are the conflicts and tensions between the characters and what's the story?" And then we allow those background conversations to filter in. But I think the most important thing at any given time is, what's the story that we're telling.

KP: From those conversations, we quickly realized that we had different perspectives of reality. There was quite a bit of overlap, but there were differences and we wanted the show to reflect those differences. That's one of the central themes of the show – that everyone is bringing in their own reality based on their own experience. If that's happening, perhaps none of us holds the ultimate truth. Maybe the truth exists outside all of us, and it's in the interactions of all of our truths.

What Alma is going through and how she was handling other people's perspectives of what she was going through needed to exist in every scene, especially in the first season. The show needed to hold that tension of multiple perspectives. You could watch it and view it differently, depending on what you were bringing to the show, so that the audience itself is an actor in the show and creating the reality of the show. AWN: It's so hard to write any type of show, even a show for kids with a bear, a pony, and a cat. Do you have to make an extra effort to do something this sophisticated, or is it just how you think?

KP: I like doing the show. I like that it's a huge puzzle. It's daunting at the beginning of each season because you’re looking at a million puzzle pieces, or threads that need to be woven, and you know you're going to be pulling it apart and reshaping it over and over again. In the writers’ room, there were a lot of migraines and closing the blinds and taking some quiet time as people tried to puzzle through it together, collectively, which is its own complicated process.

RB-W: I wasn't always in the writers’ room because I was working on BoJack at the same time. And I remember coming in there once when you guys were working. Usually there's a board in the room that'll have a timeline or a season breakdown or something. And Kate had exploded that to the whole room. So, everywhere you look, you could see cards and strings and mirrors, because they had to keep the whole season in their heads, as well as the complete timeline of this entire family going back 60, 70 years, as well as individual timelines of the family through different inflection points. It was a wild maze and I'm still amazed that we found our way through it somehow.

AWN: As creators, executive producers, and writers, both of you fulfill multiple roles within the show. How does that compare to your experience on BoJack?

KP: With BoJack I was really a writer. Sometimes I would ask to sit in on editing and some of the other production work, and I sat in on some of the voiceover work with Raphael. But BoJack was Raphael's show and he did everything through the whole production process. With Undone, I get to really live with the show throughout its entire creation, and it's incredibly rewarding – not only artistically, but also in terms of establishing and fostering relationships with our cast and crew.

RB-W: For me as a producer, the pipelining process of making this show is wildly different from BoJack Horseman. I don't think I could have done this at all without my BoJack experience, but that still couldn't possibly have prepared me for this. Working with the live-action actors, the story differences, the way we talk about the characters in the room and the way the scripts are written – everything is completely different. There were definitely story conversations Kate and I had during BoJack that we carried through in Undone – or sometimes vice versa, since we were developing Undone while we were still working on BoJack. So we would try things out on BoJack knowing that we wanted to do something similar on Undone to see how it felt or how it would play. There was definitely a good amount of sloshing back and forth.

KP: That actually is a good metaphor for our brains, or our minds, how we think. There is this wonderful overlap that we run with together, and then there are differences that we also run with together. AWN: Raphael, when we interviewed you in 2016 about BoJack, you talked about an early review of the first episodes that said, "For a show that's trying to be wall-to-wall jokes, there sure are some scenes that don't have that many jokes." To which you said, "That's not what we're trying to be." What is Undone trying to be and are you being what you hope to be?

RB-W: I'll answer the second question first because that's easier. Yes. I think we are definitely being what we hope to be. What is it that we hope to be? That's much more complicated. But I do think that one of my missions with BoJack, and with all of the shows that I work on, is to push the edges of what we think of when we think of television, in particular animation. I felt like we broke through the brush a little bit on BoJack, and we were able to find some new territory, and find that our audiences were excited to go to different kinds of places than you would typically go in adult animation. One of the mission statements of Undone was, “Let's walk across that bridge and keep going." I think there's a whole world of storytelling out there that is not necessarily being utilized in the world of adult television animation.

I've talked to so many people who have told me, "I didn't think I liked cartoons, but I love Undone." And I go, "Well, yeah, that makes sense because most of the cartoons that are being marketed to you are maybe not the kind of shows that you would like, but there's no reason that has to be." I mean, you can do all sorts of incredible things in animation. I hope that Undone inspires people, both on the creative side and also on the business side, to invest in more kinds of stories in animation.

AWN: You’re using a stylized animation technique that involves a live-action component. What does this provide that you wouldn't get from straight live-action or animation?

KP: Quite a few things, actually, because thematically the show is exploring the nature of reality and the potential bendiness or stretchiness of what reality can be. With the hybrid technique, we get to bend reality in a way that doesn't draw a hard line between live-action and CGI. If it were live-action, it would be telling the audience, this is absolutely and totally 100% real. Being in that animated space says, "This is an imagined space that looks and feels real, but it's a place where anything is possible." So it's a different visual messaging that comes through immediately. I think it opens people up to play and to wonder and to question, which is another important thing that we're doing in the process of making the show. And of course being able to capture the nuances and emotional states of our actors’ performances is incredibly powerful. AWN: Last question. Do you think there's more pressure on you with Undone, or was there with Tuca & Bertie, on which you were an executive producer, because of the success of BoJack? And, if so, are you uncomfortable being under a microscope like that?

RB-W: I wish I was under more of a microscope. I would love for Undone and Tuca & Bertie to get the kind of attention that BoJack got, because I think they stand shoulder to shoulder with BoJack. I mean, look at the reviews that these shows have gotten. I wish that more people were looking at them and talking about them. I would love for all the BoJack fans to watch them because I think they'd find a lot that they love in them.

Animated Characters: The Art of Babbitt – Part 1
Bruce Smith and Ralph Farquhar Talk ‘The Proud Family: Louder and Prouder’ Season 2
VFX is the ‘Thing’ for Tom Turnbull on Tim Burton’s ‘Wednesday’
We Need to Chat
Choc Chip Animation Riffs on Pop Culture in ‘The Art of Murder’
F is for Flake: The (Not So) Great Animation Robbery?
Re-VIEW: ‘Avatar: The Way of Water’ – A Miraculous Vision
‘Kung Fu Panda: The Dragon Knight’ Celebrates a Special Lunar New Year
END_OF_DOCUMENT_TOKEN_TO_BE_REPLACED