‘Into the Unknown: Making Frozen 2’ Documentary Arrives on Disney+

Intimate, six-part series follows the lives of artists who produced the highest grossing animated film of all time. 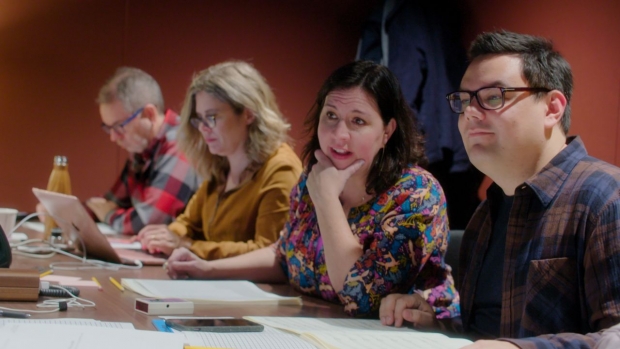 Over 1,300 hours of footage, shot over 115 days, boiled down into six documentary episodes covering the production of the highest-grossing animated feature of all time. Launching today on Disney+, Into The Unknown: Making Frozen 2 provides a bird’s-eye view of the intense, exacting work, and the people involved, in creating Frozen 2, Disney’s hit Frozen sequel, which set all sorts of records on its way to hauling in more than $1.5 billion at the worldwide box office after hitting theatres last November.

Beginning in December 2018, and up through and including the film’s premiere, the Lincoln Square Productions documentary team filmed everything from voice acting, storyboarding and animation at the Walt Disney Animation Studios’ headquarters in Burbank, California; to the raw songwriting process of Kristen Anderson-Lopez and husband Robert Lopez in their Brooklyn apartment; to the D23 Expo in Anaheim, California and Frozen 2’s first audience preview in San Diego.

But this is unlike any other behind-the-scenes film documentary; it focuses not just on the “how” of production, but also the “who,” through intimate, revealing glimpses of the cast and key Frozen 2 team members.

“Right from the very start, there was an incredible commitment that we all wanted to make something that was very different from a traditional behind-the-scenes special,” series director Megan Harding shares. “It had to be true, it had to be honest. It would tell you how animated movies are made, but more than that, it was about how creativity is really hard, these movies don’t just come out fully formed, they are hard-won by many talented people. And that meant that people had to be honest, brave and fearless when we came by. And everyone was.”

“It’s about trust, and with that trust, you share your whole life with each other to inspire these characters to be three dimensional,” adds Frozen 2 writer and director Jennifer Lee. “Letting yourself bring who you really are and be vulnerable with your creative work, we knew it was the only way we could go.”

Lincoln Square Productions partnered with Disney Animation Studios back in 2014 to make an ABC primetime special, The Story of Frozen: Making an Animated Classic, a year after Frozen was released. But this is the first-time cameras were present to capture both the personal and professional struggles and triumphs of everyone on the creative team.

“Being vulnerable is the only way to make great work,” says Idina Menzel, the voice behind Elsa. “The interesting thing about Frozen 2 for me is that it resonates with so many young kids. And yet, as a woman, it’s still something I contend with, this idea of stepping into my power. That’s what I love seeing about Jen and Kristen; they’re these two talented women doing so much, making themselves vulnerable but being in such powerful positions, not afraid to make their choices and decisions and take risks. I really love that the documentary celebrates them.” In the series, we see Lee juggling Frozen 2 director duties with her ever-expanding and demanding role as chief creative officer at Walt Disney Animation Studios, while at the same time, printing out math homework for her teenage daughter during an early shift at the studio. The documentary follows other personal moments, such as Kristen Bell (the voice of Anna) and director Chris Buck sharing their deeply emotional response to Anna’s song, “The Next Right Thing,” as well as animation supervisor Wayne Unten and Menzel bonding over Elsa’s influence in their lives.

“I feel like I owe Wayne so much,” Menzel says. “His work has literally changed my life and the way that he’s integrated my soul and my essence into this character that I’m so proud of is something I’ll have forever… and my son will have... I’m just awe-struck, and it humbles me being in something like this, where you see how much work goes into it and being a part of a family where people resonate so much with what we do.”

The documentary also sheds light on the animation process itself through conversations with some of the key artists involved. First time Elsa animator Malerie Walters, one of 90 character animators on the Frozen 2 team, shared videos of herself running and jumping down neighborhood sidewalks with her boyfriend, who captured it all from his skateboard. She used this reference footage to help create the final series of Elsa’s movements for the song “Into the Unknown.”

“I had never animated a character running in a film and I remember being like, ‘How am I going to do this?’” Walters explains. “It was actually my boyfriend’s idea. You want to get whatever reference you take to be as accurate as possible to the shot, so that it’s more informative that way. That was really cool to get to do that and to get to collaborate with him on that.” The documentary also shows how Walters managed to animate her head on a group of reindeer bodies. “That was never meant to see the light of day,” she laughs. “No matter what I’m working on, you’re always putting a little piece of yourself into it and I think that’s what makes animation so fun. It’s really what draws me to it.”

The series also explores Anderson-Lopez and Lopez’s songwriting / composing process, though the husband and wife team weren’t necessarily prepared for being captured on film.

“When it was happening, we didn’t quite realize when we said, ‘Sure, that sounds fine,” that it would be so weird when a camera showed up,” says Anderson-Lopez. “Some days, we don’t put on real pants.” “For us, songwriting is a very private thing that happens between a man and a woman,” Lopez adds. “When two people love each other very much, they go into a room and they start playing the piano and they give birth to a song,” Anderson-Lopez continues. “So, to have cameras there, it felt like having cameras for other private things you might do. So, what we would do is write the bulk of the song and then let the cameras come while we were recording.” “But,” she concludes, “We’re so happy that everyone gets to see the amazing pieces of the puzzle...and, ultimately, we learned a lot watching the documentary ourselves.”

Some songs cut from the film and never featured in the released soundtracks, such as Northuldra’s “See the Sky,” can finally be heard in Harding’s documentary. It’s also the only place we can see Josh Gad dancing in the sound booth and the reaction of over 7,000 hard-core fans the first time they saw the final version of “Into the Unknown,” at the D23 Expo.

Gad expressed his appreciation for the documentary highlighting not only the crew’s vulnerability as they create and recreate the hit film, but also the movie itself, which seems both timely and timeless in its messaging. “What’s been really fascinating about Frozen 2, for me, is how it’s almost become something else as Coronavirus has locked us in our homes and as we’re dealing with so many different issues that are so difficult,” Gad says. “The themes in Frozen 2 have seemingly taken on a new life of their own. I find myself no longer singing, ironically, ‘This will all make sense when I’m older” or thinking about stepping ‘Into the Unknown.’”

While Lee and fellow Frozen 2 director Chris Buck claim there was no crystal ball to help them create such an on-point family film, Into The Unknown: Making Frozen 2 does show how everyone--lighting crew, writers, effects artists, and more--came together to create something truly magical once again.

“There was something about starting the process again where I almost wish we had documented the first film,” says producer Peter Del Vecho. “All the departments, everything together, has to work like clockwork to make the film. Most people don’t understand the number of people it takes and the hard work and vulnerability it takes to put these films together, and that is what we wanted to show the world.”

All six episodes of Into the Unknown: Making Frozen 2 are now available on Disney+.