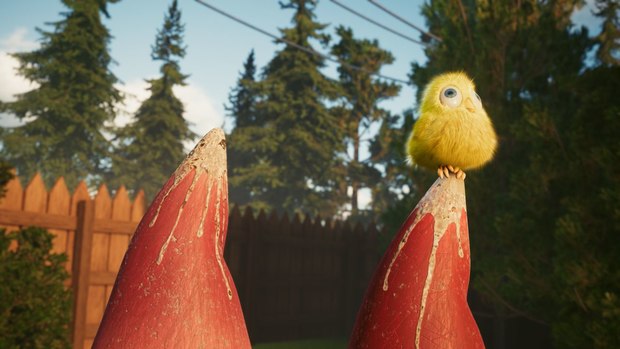 Sherman, which premiered earlier this month at the Annecy Animation Festival, is a CG short that was animated, lit and rendered in Unity 2018.3. It tells the humorous story of a racoon, under the watchful eye of Sherman, a little yellow bird, desperately trying to evade a renegade sprinkler and snag some dog food from an unattended bowl. Hijinks and pratfalls ensue. No surprises there. From the same Emmy Award-winning Unity team that collaborated with Disney Television Animation to produce three Baymax Dreams shorts inspired by Big Hero 6: The Series, Sherman was designed as a learning tool for the artist community and animation studios to educate them about best practices when setting up a real-time animation film project.

According to Isabelle Riva, head of Unity Technologies’ Media Entertainment Innovation Group, her team workshopped the story moving straight into 3D to script the action. “Once we developed the story and assets, seven people - cinematic creator (editor/layout), rigger, animator, lighting specialist, VFX artist, CG artist, and a graphics programmer - worked 2-3 weeks to lock cameras and animations. It was very quick to ideate in real-time, and no storyboard was required. Assets from Maya and Substance Painter were loaded into Unity, and our Timeline (sequencer) and Cinemachine (smart procedural cameras) features were used to layout and edit the action. The team saw the whole picture early on, thanks to round-tripping workflows between DCC software and Unity. Animation cycles were quick to refine, and we could work on real-time lighting setups in parallel!”

The team then spent time refining the film’s look, especially the fur. “From there, we focused on look development and polishing eye and fur shaders over several weeks,” Riva continues. “The goal was to design a real-time UX/UI to allow our lighter and CG artist to quickly iterate on the fur groom maps and refine lighting across the entire short in a few hours, compared to days or weeks as in a traditional pipeline.”

The team took full advantage of the Unity Platform, from tools like Timeline and Cinemachine, to the High Definition Render Pipeline and Post-Processing Stack. Unity provided AWN a breakdown of some of the key tools used in the project as follows:

“We also used tools like the Shader Graph to create custom shaders and see their results in real time, and the Progressive Lightmapper to simplify the lightmap generation used to emulate global illumination,” Riva adds. “Other tools, such as the Unity Recorder and FBX Exporter, were vital to the success of the final project.” More and more, individuals and creative teams are moving to Unity to empower directors and makes it easier to facilitate the cross-department collaboration required to ensure every story element is aligned throughout the creation process. “Unity is a true end-to-end platform for making real-time short films and episodic animation,” Riva emphasizes. “It gives creators the power to do modeling, layout, animation, lighting, VFX, render, and composite all in the same platform, in one place, at the same time.”

One of Unity’s most impressive benefits is that it affords artists more iteration time. “A creator can immediately see how a change in lighting or a shift in how a character is positioned impacts the final shot, allowing them to experiment more and get to a better story, faster,” Riva shares. “The increased speed of real-time production gives smaller teams an edge to compete with larger studios delivering huge animation orders, while also empowering large studios to help accelerate their animation pipeline.”

It also generates significant cost savings, something productions always strive to achieve but are finding harder and harder to do without jeopardizing the quality of their projects. “From a business perspective, there are 40% cost savings associated with Unity’s real-time rendering workflow,” Riva asserts. “With real-time rendering and the all-in-one nature of the platform, producers are able to free up their crew to address other bottlenecks. Also, artists find affordable plug-and-play solutions in the Unity Asset Store, cutting down on labor. They can also tap into the knowledge base of the Unity community to identify best practices and troubleshoot a problem on the fly.”

Another key business advantage is that studios can get a higher ROI on their assets by having them reside in the same platform they’ll use for other projects sharing the content. “Once rendered in Unity, characters and sets are not only ready to be used in other animated projects, but they’re also game-ready, VR-ready and AR-enabled,” Riva describes. “Unity’s multi-platform integrations unlock franchise potential for any animation project” For Sherman, one of the biggest technical challenge was rendering fur, which remains one of the most complex and multifaceted problems in real-time graphics today. For Riva’s team, they were all too happy to tackle this “hairy” problem and share the results with the Unity community. “In the end, achieving the convincing illusion of fur required the union of multiple complex systems dealing in transparency, shadowing, shading, simulation, and authoring,” Riva says. “And since Sherman was a proof point for creators to play with, we made it a priority for fur to fit naturally into cinematic shots. This led us to the development of a unique solution for transparency - which was the key that unlocked our best results - yielding a visually coherent fur volume/silhouette that happily lives in shots with depth of field, motion blur, ambient occlusion, and more.”

Another big challenge was grappling with the logistics of the non-traditional pipeline. According to Riva, “Because you can work on everything at the same time in Unity, we tackled things in a non-linear way. For instance, the blocking, animation, and character assets for Sherman were all developed well before the technical approach to fur authoring and shading had been finalized. However, it was tough to work on look development in a fully-animated and lit environment as opposed to in a neutral turntable type of setting. Unlike with a neutral scene, balancing fur grooming and shading changes across more than 20 character-focused shots was more work. Luckily, being able to render final frames quickly allowed us to refactor our entire fur material library in a matter of hours or days, depending on the extent of the changes to the fur system. The creative and technical agility this gave us was ultimately deeply rewarding.”

As real-time graphics technology gains more and more acceptance, and as the tools become both easier to use and more sophisticated simultaneously, Riva and her team are determined, with projects like Sherman, to help expose more artists and directors to the power of the Unity platform. “At the moment, it seems the animation industry is confounded by how to integrate engines,” she reveals. “But the secret is there is no right way to use Unity. Unity is so open and easy to hook into other tools -- you can use it in part of your pipeline or end-to-end. Some bolder studios are embracing Unity for every department; others are adopting it in a more gradual way. No matter how a studio has built its animation pipeline, Unity seamlessly plugs into the creation process to enhance a studio’s content pipeline.”

And, with the release of Sherman, Unity is also releasing the project template, so creators can learn by using the graphics tools that were modularized for everyone to access.

You can download the free Sherman template here, which includes the following free modular features: