‘Unicorn Wars’: The Art of Provoking an Audience 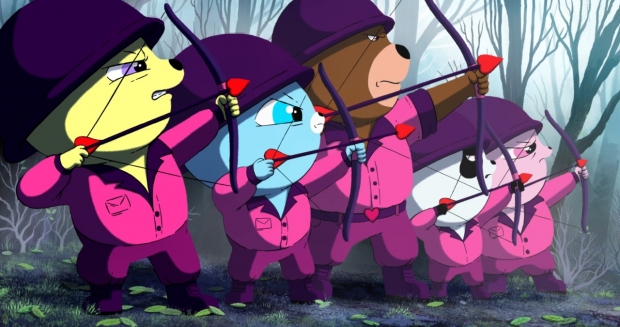 Teddy bear boot camp, fueled by honor, pain and cuddles. Rainbow vomit amidst vibrant hallucinations. Brutal unicorn hunts flooded with blood, sweat, tears and cupid arrows. Brother bears turned against each other as war rots their minds and wets their pants. Glittering fields and rivers filled with rotting teddy corpses. Unicorn Wars, written and directed by Alberto Vázquez, is filled with disturbing, grotesque imagery, alongside vibrantly beautiful scenes that twist the icons of childhood and morph innocents into all that is iniquitous.

And that’s exactly what Vázquez was attempting to achieve.

“First and foremost, I want to shock the audience, to provoke them,” says the filmmaker, known for the animated short films Birdboy and Homeless Home. “So, in this movie, we do find comedy elements, and, at the same time, some other people might be horrified by what they're watching. But, to me, there is beauty in darkness.”

The film is produced by UniKo, as well as Abano Producions, Autour de Minuit Productions, Schmuby Productions and ADV Studios, and is distributed by GKIDS. Having made its U.S. debut at the Fantastic Fest, Unicorn Wars was first presented at the 46th Annecy International Animation Film Festival and had its theatrical release in Spain last October and in France on December 28 – where it is still playing. On March 10, it hits select U.S. theaters and will be available on demand.

Take a look at the trailer, then read more about how the film was produced.

The feature begins in a teddy bear army boot camp, which indoctrinates young recruits to lead them into a war they have started against the unicorns because they represent a threat for the security of their people. Two brothers - a blue bear aptly named Bluey and a pink bear named Tubby - along with a group of other new recruits with no experience, are eventually sent on a dangerous mission to save the Magic Forest.

The Bambi-meets-Apocalypse Now film, as it’s being regarded as, covers a variety of adult themes from religious bigotry to environmentalism and moral corruption.

“And it’s not a satisfactory ending,” states Vázquez. “It's an uneasy ending for the audience.”

Despite its unhappy ending, the film makes good on its aim to show the poisonous effects of festering hate, especially when fed by more evil and how, in the real world, the powers of love, kindness and truth don’t always prevail. In Vázquez’s opinion, these themes and messages actually come through more clearly through the conduits of teddy bears and unicorns then they would through actual people.

“They're icons from our childhood,” says Vázquez. “They are timeless, they don't belong to a certain area, and are universal, so everyone can relate to them. And they are historical characters that belong to the history of animation and comics.

He continues, “And I like to break traditions with universal icons. It makes the audience suffer a bit more. The fact that these characters are teddy bears and unicorns, I deeply believe that really helped tell this wild and violent story. Because if they were other, more believable war-like characters, it wouldn’t provoke the same reaction from the audience that I wanted.” In 2009, Vázquez created a short comic of seven pages which, in 2013, became a short film, called Blood Unicorn, about two teddy bear siblings who go out hunting unicorns. Then, in 2016, Vázquez’s suddenly had the opportunity to develop a feature film script, so he took the original short film story and mixed in war, religion, as well as mystical and epic elements. In total, he says it was roughly a six-year process to create the movie that became Unicorn Wars. But it’s been a 12-year journey in the making.

“First and foremost, it was my goal to create an extreme movie, something wild and violent,” Vázquez shares. “But by ‘violence,’ I don’t just mean visual brutality. I mean an emotional violence as well.”

Unicorn Wars, takes viewers on a journey that evolves as the characters evolve. The themes, which start out as primarily dark comedy, begin to transform and turn the film into a drama; ultimately, the story ends as a horror film.

“The main challenge was regarding the tone of the movie, because it changes dramatically,” says Vázquez. “I tried to stand by the words of Alfred Hitchcock that he says to François Truffaut in an interview: ‘You can start with a cliche, but you cannot finish with a cliche.’”

A big help in both defining and transitioning the tone throughout the 92-minute-long story was the use of color and design. The 2D/3D hybrid animation draws inspiration from classic Disney artists like Alice in Wonderland’s Mary Blair and Sleeping Beauty’s Eyvind Earle, both experts at taking a fairytale setting and making it magical and dreamy one minute and completely terrifying, unsettling, and disorienting the next.

“In the beginning we have all these cake tones; pinks and neon colors,” notes the director, who also served as art director on the film. “Then, as the teddy bears enter the forest, there is a desaturation of colors and lots of cold tones. And then, at the end, the colors are bold and harsh because they are narrating a very graphic story. The use of color was key in conveying the narrative.”

Unicorn Wars’ use of color is as penetrating to a viewer’s eyes as a unicorn’s horn is to a teddy bear soldier’s abdomen. It doesn’t hold back, and it makes no apologies. Color is also used to help immerse viewers in the minds of the characters. For the flashbacks sequences Bluey’s memories are blanketed in blue and Tubby’s  memories are all in pink. It’s a straightforward idea that, in Vázquez’s opinion, yielded effective results.

“The animation and the art are strong” he says. “Technically, the movie is better than I originally thought it was going to be. I’m really happy with the results and the final look of it. I did what I wanted. My original vision and intentions are right there in the movie.”

Vázquez is not the first filmmaker use animation – and cute, cuddly woodland characters – as an effective tool to tell very adult-focused stories. Watership Down, not only a famous novel, is also Martin Rosen’s widely known 1978 animated adaptation. While the book’s story of courageous rabbits embarking on a perilous journey to a new home already contained distressing and violent themes, Rosen’s animated film was unapologetic in its visual portrayal of violence.

And though the necessity of its visuals has been widely debated, few (if any) can say that Watership Down’s animation wasn’t effective in portraying the dire circumstances of its characters.

“I think that animation should have bigger support from everywhere and everyone, because there's so much that animation could be used for and hasn’t yet been widely exploited that way,” says Vázquez. “Even though 95 percent of animation right now is made for children, with that objective in mind, I think animation is a poetic way to portray reality.” Vázquez hopes that Unicorn Wars can finally open up the minds of viewers, animators, and directors to the full scope of possibilities in animation and gives storytellers permission to run with their ideas, no matter how unconventional.

“I would like to think that, yes, this movie is going to influence the future of animation,” says the director. “At the end of the day, we all want to contribute to that chain, where people inspire other people in this industry.”

Vázquez is currently working on a new feature project called Decorado, based on his 2016 short film of the same name about the sins of society and human relationships presented in a traditional fable setting. The film will be presented at Cartoon Movie in Bordeaux, taking place March 7-9.

Taking an Old-School VFX Approach in ‘All Quiet on the Western Front’
‘Natural Habitat Shorts’: Like ‘Ranger Rick,’ But for Adults
Framestore Sets Sail on ‘1899’ with New Virtual Production Tools
Animated Characters: The Art of Babbitt – Part 1
Bruce Smith and Ralph Farquhar Talk ‘The Proud Family: Louder and Prouder’ Season 2
VFX is the ‘Thing’ for Tom Turnbull on Tim Burton’s ‘Wednesday’
We Need to Chat
F is for Flake: The (Not So) Great Animation Robbery?
END_OF_DOCUMENT_TOKEN_TO_BE_REPLACED