Unearthing the Giddy Goriness and Puerile Pleasures of ‘Farzar’

Waco O’Guin and Roger Black, the prime movers behind ‘Brickleberry’ and ‘Paradise PD,’ talk about their creative journey and particular brand of craziness on their new animated sci-fi comedy series, now streaming on Netflix. 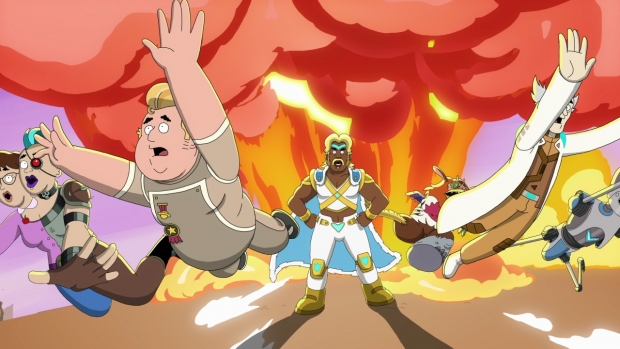 In their latest foray into the world of take-no-prisoners animated lunacy, creators and unreconstructed provocateurs Waco O’Guin and Roger Black turn their sights on the fictional planet of Farzar, where the not entirely competent Prince Fichael and his motley crew of misfits must leave the safety of their domed city to do battle with the evil aliens – previously vanquished by Fichael’s father Renzo – who have returned to threaten their settlement.

Want to know more? You’re in luck. After careful consideration of who might be best positioned to provide incisive analysis and in-depth insight into the intricacies of Farzar, we went with these guys, who were happy to share. Waco O'Guin: It was too dirty. When they told us to go for it, we were like, "Are you sure? Are you sure you mean everything?" "Yes, give it to us." And they did not want it when we gave it to them.

AWN: So now you've got the new show at Netflix, where they’ve clearly been more accommodating. Where did the idea for Farzar come from?

WO’G: Did you want to take that, Roger?

Roger Black: No, I was just going to say my stepfather is an alien. It was a joke. I thought of that in the bathroom. Go ahead and do the serious answer.

WO’G: We thought of Farzar right after Brickleberry, when we were just looking for something that was completely different. We were huge fans of Masters of the Universe and had always wanted to do a sci-fi animated show. We didn't get it sold, but we did sell Paradise PD. After the success of that show, Netflix wanted a new series, so we dusted off Farzar, redeveloped it, and pitched it to them.

AWN: How do you get from wanting to do a sci-fi show to developing something that you feel is actually doable? What’s your process?

RB: We just got together in the writers’ room and we started doing a lot of funny sketches on our dry-erase board. And then we were like, "Okay, what's the family dynamic? What's our story arc?" You start with that core world-building: Where's this taking place? What's the dynamic between the father and the son? The son's got a best friend. You’re just building the universe – you're playing God for a little bit. AWN: Do you think about story ideas or characters first?

WO’G: With this one, it was the big idea of humans on an alien planet, and the twist of the son believing his dad's lies. Then definitely characters, and then future episodes. With Netflix, basically you need to know what the first three seasons are, which is nice. If you keep getting picked up, you already have an idea of what Season 2 and Season 3 are.

RB: You're almost writing to the end of the series – in addition to writing the end of each season, you want each season to end on a cliffhanger to go to the next season. It's different than Brickleberry, which was episodic and had standalone episodes. At Netflix, it's great because you can tell a whole story over seasons.

WO’G: On Netflix, only crazy people watch them out of order, whereas Brickleberry had to be standalone, because you may just come in at Episode 5 and it's still got to be funny and make sense.

AWN: How has that affected your production process? Has your way of working together changed appreciably since you started with Brickleberry?

WO’G: The writing process has changed because we've gotten better and figured out how to do it. Going into Brickleberry, we had no idea what we were doing. So the good news is we learned how to do our jobs on the job. As far as the production, it had to drastically change because of COVID. But we're really big on finding things that work and we just try to leave them alone as much as we can. AWN: Do you enjoy working together on this stuff as much as you enjoyed collaborating in your college comedy tour days?

WO’G: I think more. I mean, Brickleberry was nervous breakdown-level stress. It was tough. Netflix is great to work with. So we're more relaxed and having more fun than we ever have.

AWN: So – aside from Lance Reddick saying “fuck,” which for me is enough reason to watch the show, because his character is so funny and so different from his usual style – what can we expect from Season 1?

WO’G: You can expect the same type of humor. I think people are going to be surprised that there’s social commentary, that we're making comments on things. The show's somewhat elevated, compared to some of our older work. It definitely is better looking than anything we've ever done. Our team just really knocked it out of the park with character design, background, color, animation effects, the whole thing.

AWN: The world's a very different place than it was when you started with your first show, and even when you were making Paradise PD. Do you take into consideration what's going on in the lives of your audience with regard to how you craft your stories and your jokes?

WO’G: I think we did more on Paradise PD because that’s more of a present-day show. And maybe some of the depression about COVID seeped into the characters. So I think a lot of what we’ve been going through is present in the new season of Paradise, which is coming December 16. We looked at Farzar as more of an escape from the pandemic than as an opportunity to comment on it.

RB: What animation and sci-fi are is essentially escapism. You just want to go off to another planet. Shit's too crazy on this planet. I just want to forget about this fucking planet for a little bit. AWN: What's the biggest challenge for you to make a show that’s consistently funny?

WO’G: I think for us that's the easy part. It’s just about sitting around in a room with writers for eight to 10 hours a day, pitching thousands of things until the whole room laughs at something. But it’s not just what we think is funny. We screen these episodes multiple times to see what the whole crew laughs at. And no matter how much we love something, if it ain't getting a laugh, it's got to go or it's got to change.

AWN: Would you say that you think more visually now than you used to?

RB: Yeah. There's a lot about staging that we've learned. You can't just write the joke or write the bit. You've got to have directors with a good sense of comic timing that you can go along with.

WO’G: Working in sketch comedy, where we had to do everything from scripting to shooting to editing, helped us start to think visually. And we do a lot of drawing in the writers’ room to help figure out exactly how we want something to look. On some bits, we let the directors take a first pass and, if it's not how we want it, we'll tweak it. But some things are so important and specific, we either give them drawings or we give them an Internet reference or something.

RB: And, conversely, we'll have something written out, and then our director or artists will board it in a certain way, and we’re like, oh shit, why didn't we think of that?

WO’G: That's why you don't want to be too heavy-handed. You want to let them have their creative freedom, because sometimes their ideas are better. AWN: Do you ever miss doing things that you used to do when you were creating sketch comedy, like the drawing?

WO’G: These guys are so much better than we are. We’re both artists, but these Burbank and North Hollywood guys are the best in the world. We're just glad that they're there to do it for us. I mean, we feel very lucky that we still get to act. We get to hire ourselves for voice parts, which is the most fun part.

RB: Records are on Friday, and after writing eight to 10 hours a day, by Friday we’re ready for a break. And you get a John DiMaggio or a Tom Kenny or a Dana Snyder in there, and they're going to make you laugh. It’s like, we'll break that story Monday, man. We're going to have fun today.

AWN: If you had to cite any lessons that you learned in the previous series, or the previous years, that are serving you best now, what would they be?

WO’G: I think the earliest lesson, back when we were doing our sketch comedy show in front of a theater of about 1,000 college kids, is the need to hone the comedy. Making sure it's fast-paced, and going for the hard joke. If you want the big laugh, you've got to go for the hard joke. You've got to go for the surprise they don't see coming – where they think you did the joke, but you have another joke back here, a sucker punch that's going to really make them laugh. We were lucky enough to have all that experience before Brickleberry. And then, with Brickleberry, we learned how to break long stories.

RB: We learned that you want to make the story concise and snappy, with some twists to keep the viewer interested, but not make it too twisty. Because if you're trying to figure out what's going on with the story, you're not going to be able to laugh. AWN: Last question: Are there places you still want to go where you haven’t been able to, either because you feel they’re taboo or because you’ve been discouraged from going there?

WO’G: I think we've gotten to do everything we want. Netflix rarely, if ever, tells us we can't do something. But there are absolutely pitches that come out of the writers’ room – pitched with a straight face – that would blow your mind. We're like, "Are you nuts?" Everybody thinks Roger and I are insane people, but we're like the parents. We’re like, "No, we're not doing that. We don't even want to do that." It happens a lot, because in the writers’ room – as it should be – anything can be said. The only way to have a creative place is for people to know that they’re not going to be chastised for pitching anything. But we can also say, "Thanks, but that's a little crazy. Let's think about something else."