With a new series in production at Cartoon Network Studios, the ‘Adventure Time’ alum reflects on learning to collaborate and the benefits of selling out. 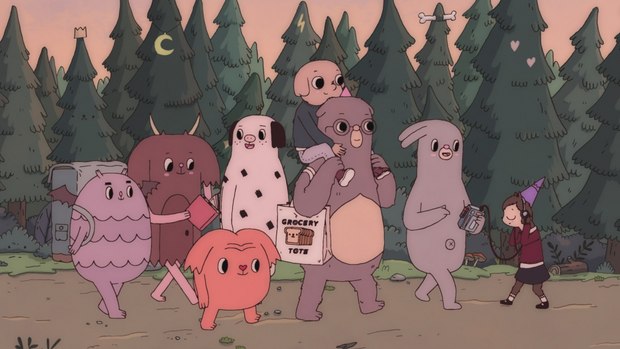 “It’s kind of like Buffy the Vampire Slayer for children,” Pott explains. “It’s got werewolves and witches and magic, and it taps into that feeling from when you’re a kid and you think everything is possible, everything has the potential to be magical. It’s got a kind of Charlie Brown vibe; it’s very sincere, with a very sort of soft humor. It’s gentle. It’s a gentle show.”

Pott, who was named one of Variety’s “Ten Animators To Watch” in 2017, will be presenting a special sneak preview of the series this month at Annecy as part of the “Cartoon Network Celebrate Women in the World of Animation” panel to be held at 4:00 p.m. on Thursday, June 14. Meanwhile, the pilot for Summer Camp Island has been rounding the festival circuit, with screenings at Ottawa, TIFF, the AFI Fest and Sundance, among others. An alumna of the Adventure Time writing room, Pott has shepherded Summer Camp Island from original concept through pitching and development and on into production at Cartoon Network Studios with a team of roughly 30 artists. “At its core it’s still the same show, but aesthetically it’s changed quite a lot,” Pott acknowledges. “The backgrounds are completely different, and, coming from an illustration background, it’s more in tune with my illustration style. The characters have definitely developed,” she says.

“A lot of the team comes from Adventure Time, so it’s been a very collaborative process,” Pott continues, noting that she developed the series in a “little black box” for nearly two years on her own. “Now that there are all these people involved, they’re all putting their stamp on the characters and growing it together, which is really lovely.”

In addition to adding new characters, collaboration also brought changes to the relationship between the two original characters. “In the pilot, originally, Oscar had a crush on Hedgehog, and as we developed it into the show we took that off the table completely,” Pott recounts. “We wanted to have a best friendship that was just unconditional friendship love with nothing romantic there, just these two people that really support and love each other no matter what.” Now living in Los Angeles -- following a stint in Brooklyn, NY directing spots for the likes of Oreo, Toyota and MTV’s Liquid Television via prodco Hornet -- Pott is fully immersed in the world of production. Making the pilot allowed her to observe all the stages of television production first-hand, from storyboards and animatics through editing and sound design. That’s a long way from her solo undergraduate film, My First Crush (2007), and her early collaborative efforts at the Royal College of Art, where she completed her thesis film, Belly, in 2011.

Fans of Pott’s work might recall Oscar from Belly. Her visual style is unmistakable, filled with whimsical characters and a soft, muted palette that evokes the serious side of being young. Her storylines are equally thoughtful and earnest, recalling the tough lessons of childhood.

“I really love being in the writers’ room,” she enthuses. “I feel like I’ve made some of my closest friends in there. It’s like going to work to sort of hang out with three of your closest friends. I’ve made some really, really good friendships here and that’s been great. I think learning not to be so critical of yourself, or learning how to take criticism with a grain of salt, has been a great learning moment for me. Getting a thicker skin.”

Letting Go and Selling Out

For Pott, one of the biggest lessons of Summer Camp Island has been “learning how to let stuff go when it’s not perfect,” while still being able to love it. “I met up with [Adventure Time creator] Pendleton Ward right after the show got picked up, and he said that if you can find one thing in the episode that you really love, that’s a victory,” she recounts. “There’s been a lot of hurdles, but I would say the biggest hurdle is getting over my own self-criticism or not feeling terrible if you feel like something is slipping through your fingers a little bit.” At a talk delivered at last year’s Ottawa International Animation Festival, Pott spoke approvingly of what she called “selling out,” tracing the path of personal projects she had developed into commercial viability. And, although she’s quick to note, “for the record,” that she doesn’t consider working at Cartoon Network selling out, Pott is just as keen on the concept as she was in 2017.

“There’s this stigma to selling out, and when I was, like, a cocky mid-twenties person, I felt very strongly about selling out too; but how are you supposed to make money?” she asks, rhetorically. “You’re doing this so that you can sustain yourself and make a living. I don’t think there’s any glory in doing something for free, or not collaborating with people who can fund your work. I always felt like that was kind of an immature stance. Everyone can do whatever they like, but I dunno. I think ‘selling out’ has pushed my work so much further, and it means I can keep doing what I want. If you work with the right brand and the right people who want to retain your vision, that’s good, it’s collaboration. People give artists a hard time for selling out, but it’s better than not being able to make your work.”