‘Uncle Thomas: Accounting for the Days’ - An Award-Winning Tribute to a Beloved Uncle

Regina Pessoa talks about her moving short film, which won the Jury Award at Annecy and just received an Annie Award nomination. 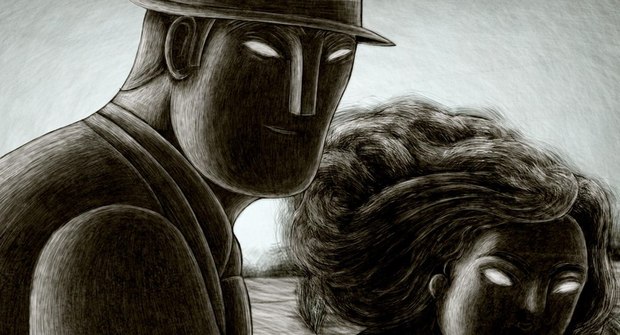 Multi-award-winning Portuguese animator Regina Pessoa has been making short films for 20 years. Her 2005 animation Histoire tragique avec fin heureuse (Tragic Story with Happy Ending), which received the Annecy Cristal and Special Jury Prize at the 2006 Hiroshima International Animation Festival, is the most awarded Portuguese film of all time. Like many animators who have carved out a niche in the universe of short films, her work has a distinctive style and sensibility that offers viewers an opportunity to enter her personal world and share her unique perspective.

Her new film, Uncle Thomas: Accounting for the Days, which won the Jury Award for Best Animated Short at this year’s Annecy Festival, and just received an Annie Award nomination for Best Short Subject, is about the filmmaker’s special relationship with her uncle – an obsessive-compulsive eccentric whose artistic inclinations had a strong influence on her as a child, and played a key role in her becoming a filmmaker. The film is co-produced by Ciclope Filmes, the National Film Board of Canada and Les Armateurs.

In a recent conversation with Pessoa about Uncle Thomas, we learned a bit more about the man who inspired the film, and about how the director brought this visually stunning and poignant short animation to fruition. “I started drawing when I was very little, like five years old, and this was the uncle with whom I did it,” Pessoa shared, explaining the origin of the film. “They were unusual kinds of drawings, because we used charcoal from the fireplace to draw on the walls of his house. He was a very kind man, but also with a lot of obsessions and manias. He had this obsession with numbers and he was always making calculations. Even as a kid, I knew my uncle was different from other people. But I loved him, I loved to play with him, he was such a wonderful man for me. He was not important to anyone, but he was important to me. And I wanted to show this, I wanted to celebrate him.”

As an animation artist, Pessoa is known for her engraving techniques, which she has utilized on media “from stone to pixel,” as she describes it. While Uncle Thomas features many examples of this stylistic motif, it’s also something of a departure from her previous work in terms of the variety of elements and methods employed.

Pessoa told us that her decision to expand her approach was dictated by the subject of the film. “This film was based on the facts of a real person, a person that left behind a lot of objects and documents,” she noted, “and they were important to me. It was his objects, his documents, his writing. So I felt that I had to use them in the film. But how to do it? This was one of my big concerns – how to combine different media in a coherent way that would mix well with my personal style, and also with some stop-motion. Because if I was dealing with objects, with concrete objects, I had to use stop-motion. And of course, I didn't know if it would work.” As it turned out, Pessoa had a lot of time to think about it. She spent three years securing funding and finding the right co-producers prior to starting production. Once all of that was in place, the actual production took a year and ten months. It wasn’t her favorite part of the process.

“I love the development, I love the research, I love when I'm preparing the film,” she told us. “So these three years of preparation – and of course I was also doing other jobs – these three years were good. But what I don't like is when everything is already decided and then it's just the execution. And the struggle with stress and having to have things ready for mixing because the studio is already booked. And it all has to happen at a certain time. So, this is the worst part for me.”

Asked whether she felt being a woman made it harder for her to find funding or distribution, Pessoa said that she actually found her nationality to be more of an obstacle. “I think I felt more discrimination being Portuguese than being a woman. I mean, Portugal is a small country that doesn't have a strong tradition in cinema. And sometimes I feel like, if someone is British, for instance, they can just draw a line and everybody claps. But, as Portuguese, we have more difficulty getting through to a certain kind of audience. But it's changing a bit now. I think that the stigma of being Portuguese, it's improving.” With regard to future projects, Pessoa revealed that, having challenged herself to combine different techniques in Uncle Thomas, and having succeeded so well, she wants to continue along this path. “It's like until now, I was learning,” she said, referring to her experience as a self-taught animator who acquired new skills and techniques as she went along. “And, with this film, I started applying what I learned. So I'm mixing the analog techniques from my earlier films with new media, to do the animation using software. So it's kind of like I feel like I'm just starting my work in animation.”

She also added that, with regard to Uncle Thomas and the man who inspired it, she had only one regret. “I don't think he was aware of the importance he had in my life,” she reflected. “He was a very humble man, a very simple man. And he was proud that I finished my art studies and that I followed my dream. But, he didn't understand very well what I was really doing. And he passed away when I was making my second animated short. So he never really got to share this with me.”