The musician and sound designer teams with animator Mike Kluge, animating a powerful dance assist from recording artist Glüme with 3D and After Effects in a quirky, vibrant short inspired by 90’s iconography, video games, and Deee-Lite’s ‘Groove is in the Heart.’ 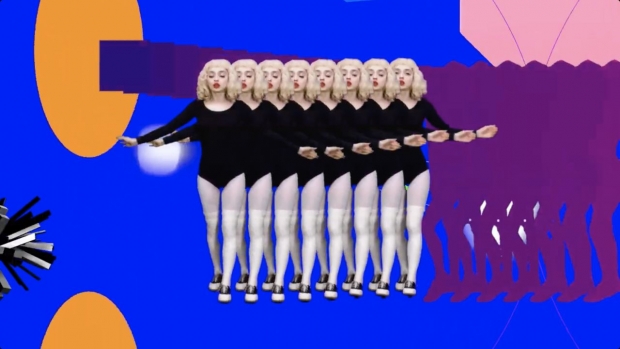 Musician and sound designer Cody Uhler has just shared with AWN a new music video for the track “Purple Barreling” from his upcoming album Darbo’s Island, out June 11 via yk Records on Bandcamp and other streaming outlets. Directed and animated by Mike Kluge (aka MKAV), the quirky, vibrant short gets a powerful dancing assist from recording artist Glüme.

Uhler has been crafting musical scores and sound effects for mobile games for nearly a decade, while managing to weave his own musical soundscapes under the moniker Nahnee Bori. Darbo’s Island is his first release without a pseudonym and is based on intense research behind the design systems and limitations of the Super Nintendo Entertainment System. While the record “does not, ultimately, play by the same rules, it is based in the same principles.”

Kluge is an animator and creator living in Nashville with a penchant for conjuring highly memorable moments by weaving together 3D animation, real-time generative processing, and storytelling.

Together, along with Glüme, they’ve created an immersive short, using imagery reminiscent of late 90’s iconography with a modern twist of processing and glitch, a visual nod to the aural reworkings of the track itself.

Take a moment to get your groove on!

Kluge and Uhler worked together to establish the color palette and general 90’s homage, taking inspiration from equal parts 60’s movement, Deee-Lite's "Groove is in the Heart," and Talking Heads’ signature jerky gestures. Glüme’s energetic dancing was combined with Kluge's 3D modeling, animated and composited in After Effects.

The production’s biggest challenge was ensuring its 90’s video game inspiration didn’t devolve entirely into nostalgia, devoid of any modern techniques. Darbo’s Island finds this balance, and Uhler and Kluge strove to reach those same goals with the video.