‘Twenty Something’ Plumbs Adulthood Insecurities… in a Good Way

Director Aphton Corbin explains how a love of drawing and a fear of imposter syndrome led to her funny and poignant 2D short for Pixar’s SparkShorts program. 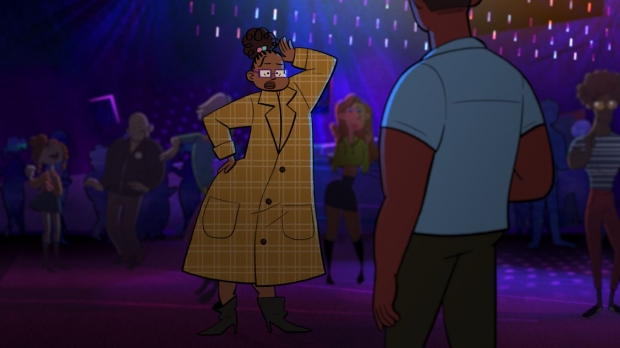 It’s an ineluctable fact of life that we all start out as kids – and no matter how old we get, we never entirely transcend our earlier selves. This may be one reason why, even as an adult, there are days when you know that, no matter how much you’re trying act mature, you're really just a kid (or multiple kids) disguised as a grown-up, hoping no one notices.

Such is the situation Gia finds herself in when she goes to a club with her sister on the night of her 21st birthday in Aphton Corbin’s insightful and very funny 2D animated short, Twenty Something. Produced by Erik Langley and created under the auspices of Pixar Animation Studios' SparkShorts program – which gives selected Pixar employees six months and a limited budget to develop short films based on personal experiences – Twenty Something premieres today, September 10, on Disney+.

Corbin, who’s been at Pixar since 2016 and worked as a story artist on Soul, was naturally thrilled to be given the opportunity to make her own short. “I panicked,” she says. “What were they thinking? Were they choosing the right person? After hyperventilating for what felt like months, I decided to dig deeper into my imposter syndrome.” She elucidates: “I am constantly dealing with this feeling of not being mature enough, old enough, to do my work. And feeling like someone's made a giant mistake and let a child into the office. And I thought this would be such a fun way to explore and dramatize my imposter syndrome.”

While Corbin can’t explain exactly how she came up with the idea of using the old “kids in a trench coat” gag as a psychological trope, she traces its origin to a comic she drew on her 26th or 27th birthday. “It was just this feeling I had that I’m hiding the fact that I’m really several kids in here,” she explains. “And every birthday, I get another kid, and we’re all in this trench coat. And that's what's really going on when I come up with a bad suggestion or something in the office. I’m like, where did that come from? It's because I'm a kid and I'm blurting out random stuff and hoping nobody notices.”

In fact, the film was originally going to be set in an office, with Gia and her friends then decamping to a club, where the shenanigans would continue. “But something about the story didn’t feel right,” Corbin remembers. “It felt like it didn’t really take off until Gia entered the club. And given my more introverted personality, the awkwardness of going out to the club felt so relatable. So I scrapped my boards, which was a hard thing to do, and started with this new location in mind. And it finally felt right.”

While some of the concepts and the location for Twenty Something changed over the course of development, Corbin knew from the start that she wanted to do the film in 2D. Drawing is her first love, and it was the joy of seeing drawings come to life in classic 2D cartoons that first got her interested in animation. For Twenty Something, she was also encouraged by seeing some of the earlier 2D SparkShorts like Burrow and Kitbull.

“One of the awesome things about working in 2D is you can get the look to be almost exactly what you want,” she says. “Of course we did have to sacrifice some things. The designs were so beautiful and complicated – but somebody has to draw all these zippers and dots and lines. I really drew inspiration from artists who use simplified designs – like early New Yorker cartoons or Charles Schultz, who could get so much emotion out of two dots for pupils.”

Still, even with a pared-down style, Corbin’s concept for Twenty Something was considerably more complex than comparable SparkShorts undertakings. Whereas the norm for CG is one or two characters, and in 2D you might bump it up to three or four, Corbin’s idea was a bit more ambitious. “I was like, I'd like to have five main characters in a packed club with speaking lines and dialogue,” she recalls. “So it was like, uh, how are we gonna pull off this crazy idea? Why can't I just come up with cute animals trying to burrow down into a hole? I don't have to be so complicated. But I felt it was a really awesome idea and, fortunately, Pixar has a lot of awesome people who want to figure stuff out.”

Probably the biggest challenge in creating the film was realizing the highly populated club setting. For the overall look, Corbin worked with concept artist Kyle McNaughton, asking him to design a club that she would want to go to. “We didn’t want it to be too seedy. It had to be unrealistically clean, super-ideal-gorgeous,” she laughs. “And Kyle came back with this great painting that we just loved. It was a huge breakthrough that helped us create the style guide for the background painters to follow. I wanted Gia to feel like a fish out of water. So, we tried to keep her in primary colors, with this more moody, darker world that she was living in.”

More problematic was creating the throngs inside the super-gorgeous club.

“The biggest struggle working in 2D is we didn't have a crowds team, like you have in CG,” Corbin explains. “So we had to find creative ways to make it feel like a packed club without having to have animators hand draw all of these background characters. So we had some animated loops going, and then we recycled the heck out of them. We ‘mushroomified’ them, as we call it – we lumped them all together, put a fill layer over the top, and colored it blue. It was a way to strategically fill up this space to make it look bigger. We kind of got away with murder on that.”