Curated by film analysts Ellen Besen and Aubry Mintz, 30 of the National Film Board of Canada’s master works by filmmakers such as Caroline Leaf, Cordell Barker, Norman McLaren, and Ryan Larkin airs on TCM on Sunday, April 9. 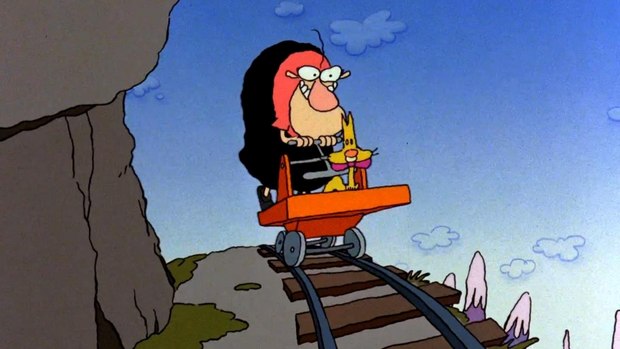 Turner Classic Movies is dedicating the whole of Sunday evening April 9, 2017 to a primetime program of screenings and interviews on animated short films produced by the National Film Board of Canada. The program includes thirty of the NFB’s master works by filmmakers such as Caroline Leaf, Cordell Barker, Norman McLaren, and Ryan Larkin, among many others.

Beginning at 8:00 p.m. Eastern, the program offers four hours of film, with commentary by Mintz and Besen in conversation with TCM host Ben Mankiewicz.

Well known and well-loved classics such as The Cat Came Back and Walking are included in this one time broadcast which becomes more than a survey by virtue of the discussion -- a true value added. Though most of the films are available for online viewing on the NFB’s own website, the analysis that Besen and Mintz bring to the films dissects the story line and points out elements of color, lighting and concept often overlooked. Along with insights into process and history, Besen and Mintz bring the making of these films to life.

TCM is the perfect broadcaster for this program. They are all about the love and preservation of film. Programming this material shows tremendous respect for the work, and TCM’s hosted format creates an opportunity for viewers to share in the knowledge of the two guest speakers.

Because it’s a classic film channel, TCM rarely shows new films. So the original idea was to offer titles ranging from the inauguration of animation at the NFB in 1941 up to 1989. But later this was extended to the end of the 90s. This leaves room for some history of the NFB: its relationship to Hollywood, its mandate to Canada and its seminal decision to hire experimental animator, McLaren, to make informational films, which laid the groundwork for the output of amazing animation that continues to this day.

Digging deep into the NFB archives, the curators have created a program which features old favorites along with titles that are rarely seen, each one intended to engage the audience in a different way. Some offer full blown narrative, others focus on a single compelling idea; some work masterfully within traditional cinematic language, others throw the rules out the window. But one way or the other, all have something meaningful to say. And of course, all create convincing worlds beginning with simple lines and shapes. Besen and Mintz do more than look at the surface of film. Currently co-authoring an in-depth book on cinematic story (to be published by MWP) , they ask themselves what is the deeper meaning here, can we peel off a few layers and see what’s really going on. In effect, they’re prying into the deepest underlying story strategies. For example you can have two films that are essentially the same story, so why is one brilliant and the other mediocre? The answer can be found in the strangest places - in props, line quality or the compression of time, anywhere really that filmmakers find potential for analogous meaning.

“And that’s what the TCM program is really about for both of us” says Besen, “It’s not just knowing the filmmakers and sharing the backstage stories and the myths, it’s the opportunity to do some fresh analysis and find new ways of understanding these films.”

For example, take Walking by Ryan Larkin. This piece is commonly thought to be an animated study of how people walk but Besen and Mintz sensed there was something else going on here. Searching for clues in the lines and marks, they concluded -- especially when factoring in Larkin’s actual life -- that this is a film about someone who feels very isolated from the world. The key to this understanding comes from studying the main character in all his details: how he walks, how he’s rendered, how he holds his body, especially compared to the crowd around him. The embodiment of this emotion is what makes the film so compelling.

Then there’s Irises, directed by Suzanne Gervais and Jacques Giraldeau. Besen describes it for us, “This rarely seen gem dispenses with the trappings of story and instead turns to high minimalism, effectively taking just one visual element and one contrasting sound element and putting them in the cinematic ring to duke it out. With a message that is generated by that very contrast, the film soon arrives at a powerful statement about the value of creativity in the modern world.”

Masterful at every level, all these films are worth watching and worth taking seriously. Screening them in the context of the curators’ commentary -- drawn from interviews with the directors plus years of teaching and film analysis, along with their own production history -- lifts the experience to the next level. Last word to Mintz, “We couldn’t be more pleased to be bringing these wonderful productions into your homes and your hearts.”

Taking an Old-School VFX Approach in ‘All Quiet on the Western Front’
‘Natural Habitat Shorts’: Like ‘Ranger Rick,’ But for Adults
Framestore Sets Sail on ‘1899’ with New Virtual Production Tools
Animated Characters: The Art of Babbitt – Part 1
Bruce Smith and Ralph Farquhar Talk ‘The Proud Family: Louder and Prouder’ Season 2
VFX is the ‘Thing’ for Tom Turnbull on Tim Burton’s ‘Wednesday’
We Need to Chat
F is for Flake: The (Not So) Great Animation Robbery?
END_OF_DOCUMENT_TOKEN_TO_BE_REPLACED