Executive producer Matthew Beans builds on Season 1 themes of harmony and positivity to explore issues of vulnerability, perfectionism… and what a jazz troll’s lair looks like; a new season of DreamWorks Animation’s ‘hair-raising’ adventures premieres today on Hulu and Peacock. 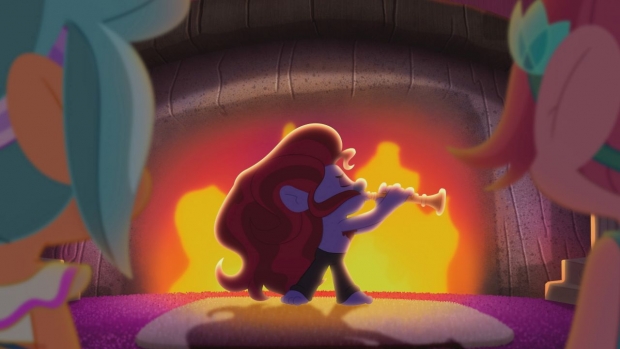 The show’s first season focused on a per-usual pink and peppy Poppy (Amanda Leighton) working with her friends to create a home for all the different troll music clans, diving even deeper into different troll cultures while dissecting their differences in order to learn how to create a space that felt like home for everyone.

But Season 2 - animated by Atomic Cartoons, the studio behind The Last Kids on Earth - is packed with even bigger and brighter adventures, spending less time exploring the TrollsTopia world and more time getting to know supporting characters.

We recently talked with Beans about the show’s new artistic challenges, welcoming back a familiarly suspicious jazz troll, animating runaway trains, and once again utilizing the world of trolls to explain the emotional psyche behind topics like perfectionism and vulnerability.

Victoria Davis: The first season was about bringing all these musical troll clans together in one utopia. How has the story focus changed in this second season?

Matthew Beans: In Season 1 we were laying the foundation of what the story of TrollsTopia is, setting up this idea that trolls from certain tribes are coming together and figuring out basic relationships - particularly Poppy, Holly, and Val - and how they become good friends. We carry on with that, but since the foundation’s established, now we can explore more nuanced stuff. Like, how people get around in TrollsTopia. We introduce the “TrollsTopia Train,” and what's going on with less prominent characters like Demo and DJ.

We combine characters you wouldn't necessarily think of having a story together and explore what that would be like. And then we also get to call back characters from the movie like Chaz, the smooth jazz troll. It’s a lot of fun, and it's not something we had as much freedom to do in the first season, because we were just trying to get the basic concept across. VD: With more freedom to dive into other nuanced storylines, did you face any new production challenges on the new season?

MB: Certainly, when it came to scale. Probably the biggest challenge from a production standpoint is that, with the concept of these trolls all relating with one another, you can't really limit it to one character relating to another or relating to a small group of characters. The whole point is that it's several nations coming together. So, if you don't show lots of trolls interacting all the time, or at least a lot of the time, then you're undercutting the whole premise.

So, we’ve got trolls, of all kinds, everywhere. Even incidental characters that we use to fill out crowds… because they're all representing different tribes, they all must look unique from one another. We couldn’t even do basic stamps all the time, where you put the same troll all over the screen and hope it feels like a crowd. They all must feel different. They all must move uniquely because, again, their uniqueness is the whole concept. And then we also kind of swung for the fences with some big premises like a runaway train. You’re passing all these different backgrounds in that episode and you have to make it feel fast, but you also can't make it feel too fast. We went back and forth on things like that endlessly.

VD: Runaway trains are a familiar concept in Hollywood cinema. Were there specific references you used to get that episode just right?

MB: There’s a part in the sequence where Poppy uses her hair to try to slow the train down by extending it like little lashings that grab on to stuff. When we were writing it, it made me think of Spider-Man 2, when he's in front of the train, and he's using his webbing on the track to slow the train down. So that sequence worked well; when we told the board team about that, they totally got what we were going for.

A couple of the shots in that episode look almost directly grabbed from Spider-Man. So, there are a couple familiar scenes, but we didn’t have time to sit down in a film study and watch clips together. I wish we could have done that. VD: You’re also bringing the jazz troll culture to TrollsTopia with Chaz’s first appearance in the series. How did you decide on the design and aesthetics that would give this character more depth and define his place in the show?

MB: The mythology on who the jazz trolls are is still being hammered out. In the film, it’s implied that there aren’t a lot of jazz trolls out there, or at least that question isn’t really answered. In our episode, we saw it as maybe Chaz is the only jazz troll, and he operates out of that sense of loneliness and isolation. So, when it came to his place in TrollsTopia, it’s complicated because TrollsTopia is where all tribes come together, and they all have a place, but then you bring in this character whose tribe isn't represented anywhere in the world, not even TrollsTopia. For a character like Poppy, that's a heartbreaking idea, that they didn't have a place for Chaz to call home. So, she's scrambling to make him a home. And that becomes the starting point for the conflict of the story.

In terms of Chaz’s design, it was easy because we could just follow what the feature did. What was challenging was coming up with what his lair looked like. We created a whole cave for him to live in. And that was also so much fun to do. We basically amplified every smooth jazz trope and then took them to an absurd level. Chaz has a tiger-skinned rug in front of a blazing fire, and there are 10 fires on every wall; he has this deep shag carpet everywhere and his own salon where he can style his chest hair. When you look at it all together, he kind of looks like he’s in hell, which we really didn’t intend to do, but it kind of works. VD: In the first season, you had to transition the character art from 3D to 2D. Did the team explore any new art styles this season?

MB: We did have to explore new design themes to do these different kinds of episodes. In our super-hero-focused episode, we got inspiration from the comic book craze happening right now, and in “My Dinner with Dante,” we had to figure out the classical troll fine dining experience. We used Art Deco elements, for example, to help create that look.

VD: This season deals a lot with troll hair, like what it means to get hair injuries and stepping inside the world of a troll’s “Hairicane.” How did you bring that to life artistically?

So, there are many premises for episodes that come from their hair, like “Hair Fracture.” There's been a lot of stories about a character getting injured and being sidelined, like in [Alfred] Hitchcock’s Rear Window. And there's no reason not to do it again, just in our own way. Poppy’s biggest obstacle in this kind of context would be that her hair gets broken, rather than an arm or a leg. But the “Hairicane” episode presented a whole new challenge. We batted ideas around a lot between our art team and Atomic [Cartoons], figuring out how to execute it in a way that was doable, mostly just getting the right color and texture so that it felt like not only swirling winds, but a tangle of hair. And it took a while, but I think it turned out great. VD: You’ve mentioned before how one of the show’s unique aspects is its ability to tackle deeper topics in a sweet and sincere way amidst all the humor. What are some topics in the new season that you're excited to share with viewers?

MB: Personally, I can be a bit of a controlling person. You might say a perfectionist. And I think Minuet’s character is a lot like that, too. We did this great episode where it talks about how she’s never been able to take a good picture. And her insistence that she takes a good picture drives her to these ends that ultimately become unsafe. She nearly gets hit by a train as a result. The story is about her learning to let go and make peace with things that she's not always good at, so that's one that personally resonated with me.

I also really like the emotional story behind the season finale because it’s about Val, who is our least vulnerable character, and her tiptoeing into really vulnerable territory when her favorite toy is lost, and she has to admit how heartbroken she is that she lost it. But the story goes one step further, when Poppy is so desperate to help her friend that she gives Val her own toy. And then Poppy goes through all sorts of pain and heartbreak at losing her toy. So, it starts out as this simple story, but it explores a lot of emotional depth.