Executive producer Matthew Beans rethinks the entire ‘Trolls’ world, bringing all the tribes together with a new visual style in DreamWorks Animation’s new series, now available on Hulu and Peacock. 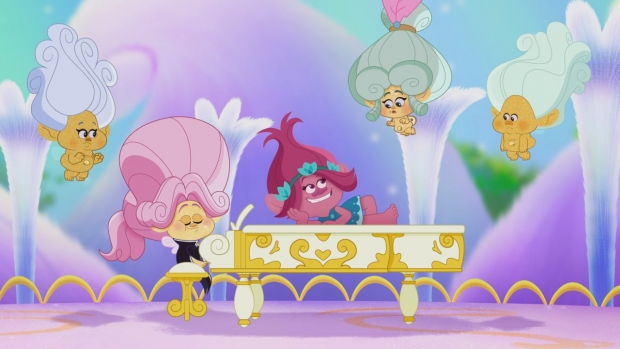 The beats continue with Poppy, Branch and the rest of the Trolls gang, but this time, the glitter-puffed world of Troll Village is getting spiced up with a bit of country, a zest of funk, a teaspoon of techno, and a clash of classical and hard rock. DreamWorks Animation’s new TrollsTopia TV series, now available on Hulu and Peacock, picks up the story where Trolls World Tour, the studio’s recent hit animated feature, left off, with the preppy and pink Poppy hoping to strengthen her relationship with the five other Troll tribes; she’s looking to turn her Troll Village home into a home for all her new musically diverse acquaintances or, as she hopes, soon-to-be best friends.

The catchy tunes and flashy animation of Trolls has been lighting up theatre and TV screens since 2016; the award-winning franchise sports two 3D-animated feature films (Trolls and Trolls World Tour), an eight-season 2D TV series (Trolls: The Beat Goes On!), and a holiday short (Trolls Holiday). Now Trolls welcomes TrollsTopia to its own animation tribe, celebrating the musical magic of friendship, diversity, and teamwork in an even more intimate way, with refreshed 2D animation and a special pep in every Troll step.

TrollsTopia’s executive producer Matthew Beans, also known for his work on Robot Chicken, wrote and co-created Trolls: The Beat Goes On!, which received an Outstanding Children's Animated Series Daytime Emmy nomination this year. Beans, highly familiar with both the comedic and sweet side of the Trolls universe and its colorful, charming characters that, yes, sometimes fart glitter, alongside his familiarity with the animated characters, sparked his creativity on how to build a brighter, wilder world that compelled more tangible emotions from viewers.

With so many Troll tribe worlds coming together in one series, the show required a new creative vision, including putting to good use the scores by platinum-selling songwriter Alana Da Fonesca and Grammy-winning composer Alex Geringas; Beans strove to not just add more fluidity, softness, and depth to the 2D animation, but to highlight the Trolls’ natural knack for mixing humor with sincerity. We recently spoke with Beans about the production challenges and rewards that came with combining five worlds into one, the advantage that 2D animation offered compared to the franchise’s original 3D setting, and the bizarre episodes that, in Beans’ opinion, highlights the best of Trolls. Victoria Davis: As a co-creator with Hannah Friedman of Trolls: The Beat Goes On!, you're already more than well-versed in this world, even before coming on as executive producer for TrollsTopia. When you first began developing a Trolls animated TV series, what made you decide on 2D rather than 3D?

Matthew Beans: I think that, whenever you're moving from feature to TV, you have to take a number of things into consideration. To execute a movie on the scale of Trolls, it takes years and years and lots and lots of people. And then, on TV, you have to strip things down and tell a story that feels like Trolls, but that maybe doesn't quite have all the bells and whistles. As to the question of whether to do Trolls in 3D with computer animation, reality is you can't tell quite as big a story [in 3D] because of restrictions. We thought if we do it in 2D animation, you can get a lot more out of the story. So, we chose to tell bigger, more ambitious stories, and let the art be a little bit less involved. Not to say it's easy, but it is less complicated than doing 3D/CG animation, so we can tell a stronger story.

VD: When you say that there are restrictions with 3D animation, what are some of the limitations in the world of Trolls that you're able to push through with 2D animation?

MB: Well, TrollsTopia is about lots of Trolls from different tribes coming together. And so, you're going to have a lot of unique characters. As a result, when you do 3D and computer-generated animation, each one of those characters has to be modeled and sculpted in a 3D environment, using a 3D program. And creating that character takes a really long time. But with 2D animation, you have a lot more liberty to create a lot more characters. Our main cast has more than 20 characters. That's a lot bigger than you'd typically see on a 3D show. And dancing is a big part of the Troll world as well. That's a lot of elaborate movements. I don't know everything about the limitations of 3D, but it’s pretty complex. Of course, it can be done beautifully, but it takes a lot of time. And you don't have quite the same amount of limitations in 2D. VD: Your team changed up the 2D animation a little bit with TrollsTopia. In Trolls: The Beat Goes On!, the characters have little Cartoon Network-style cheek dimples with freckles and now, in TrollsTopia, they have a little bit more shadow on their faces. Why change the look?

MB: We wanted to take everything that we loved about the first series, the warmth of the characters, the bright and vibrant colors; we've always loved the way the backgrounds looked. But we found that sometimes the characters would look a little flat. And we thought that, by changing the animation a little bit to keep the essence of the past show, but update it, we could make the characters look a little bit more like they were planted in our beautiful background, instead of like stickers on it.

The last show was true, hand-drawn 2D. And with TrollsTopia we used Harmony, a computer-based, 2D/CG animation system. As a result, because it's done in cooperation with computer programs, you can keep the models consistent. So Poppy always looks like she has the same features, and her proportions are always the same; all the characters always look really cute and appealing. We worked with great hand-drawn 2D companies on the last show. But there's only so much they can do to keep things consistent. Each artist is going to do it slightly different than the last one.

VD: As you said before, another big difference between this show versus the first is that you're combining all these different worlds into one space, bringing in all these different types of Troll music cultures together. What were some of the biggest production challenges that came with that?

MB: Diversity is the highlight of the show. But that means the volume of work grows exponentially. In Trolls: The Beat Goes On!, most of our backgrounds were lush, green forests, big mushrooms, trees the size of skyscrapers. But we don't do that in every episode anymore. A lot of TrollsTopia episodes involve Poppy and Branch going to Country Corral or Classical Crest. Each one of these locations, these neighborhoods, has a unique visual identity. So, we couldn’t replicate the same kind of foliage backgrounds that we would do in the previous show. We had to be more innovative. We had to think a bit more creatively because there's a lot more diversity to this show than there was in the previous show. VD: That must have made the production a rewarding experience, with the whole team getting to challenge themselves that way and expand boundaries with the Trolls universe?

MB: It is a wonderful challenge to have. I think for all departments, including the animation studio, the experience of creating the show is something that gets everybody excited because we’re regularly going into a whole other world. And then, just a step beyond just the neighborhoods being different, one of our neighborhoods is a spaceship that has access to all these sci-fi wormholes, and they can go into different dimensions. So, the vastness of the world now is incredible. And, as a result, whenever we’re writing a script, or designing a layout, or doing boards, we have this resource of creativity constantly at our fingertips. I think that's why fans are going to love the show. Because you get to experience so much more.

VD: Speaking of that, like you said, it’s not just luscious backgrounds anymore in TrollsTopia. You guys are combining destructive rock neighborhoods with glamorous glitter and country charm. What are some scenes that you're really looking forward to people watching, or cool animation tricks that you guys use that you're looking forward to seeing play out on screen?

MB: There is an episode called Classical Rock where Poppy has to get from the bottom of Troll Village, or the bottom roots of the tree, up to the top. And she can't use the Classical Crest elevator, so she has to use her hair to essentially parkour her way up Troll Tree. It's such a great sequence, with a lot of great depth, very active. The character animation is delightfully specific, and the song sequence that accompanies it is top-notch.

There’s also a girls’ night episode where Val, who's the Hard Rock troll, doesn't want to go to a girls’ night but Poppy makes a deal with her, so she has to attend. The second to last scene is about Poppy and Val connecting and becoming vulnerable with one another in a way that they hadn't before and I think it's a really beautiful scene, with a lot of great animation. It’s not a lot of flashy animation, just really genuine emotion being put into the characters. That's the highlight. VD: You've been working in animation for a number of years, on different shows, from Robot Chicken to Titan Maximum. What made working on TrollsTopia, and the Trolls franchise TV series in general, a set-apart experience for you?

MB: There is a ton of great things about Trolls, like the singing and dancing. I think it's genuinely a fun and funny world. It's definitely wild. There's a lot going on. But my favorite aspect is that the characters are so earnest. It’s a world where these Trolls don't ever mind showing you exactly how they feel about things. And, and as a result, you can do 10 minutes of wacky comedy and, in the last minute, someone says something truly vulnerable. There's an episode where it’s revealed that Tiny Diamond doesn't know how to glitter fart and it becomes this source of deep, pre-teen insecurity for him. So, Guy Diamond takes him under his wing to teach his son how to glitter fart.

It’s the most absurd story I think we've ever told, but it has a lot of actual heart to it. By the end, you're rooting for Tiny to fart. And it works because the Trolls world supports it. On other shows, you couldn't get away with that. But here you can. So, I love switching gears from laughs to hearts on the drop of a dime, and it’s working. I think that's probably my favorite thing to do on the show: make those vulnerable moments work.