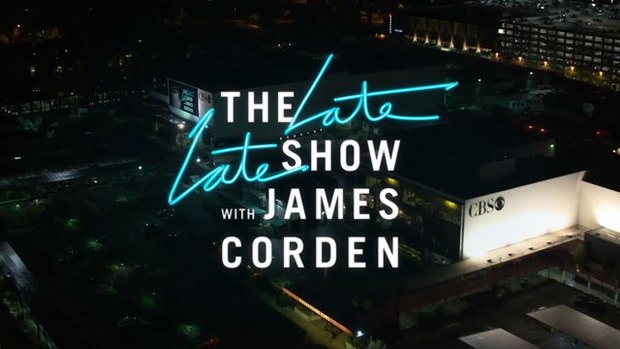 The brief for T+Co was to creatively introduce Corden and his offbeat sidekick Reggie Watts, who serves as both announcer and leader of the show’s first-ever house band. “It was important to communicate the fun and renewed energy of the show as well as its home in Los Angeles,” remarks T+Co Creative Director Elliott Chaffer. T+Co embarked on the project with a design exploration that culminated in a new logo for the fourth installment of the franchise. The wordmark juxtaposes "Late Late" in neon cursive writing with a bold white sans-serif font against a black backdrop. The cursive portion of the logo was designed by hand before giving it a 3D treatment in Cinema 4D.

The autographic aspect conveys the idea of a bold new comedic imprint on “The Late Late Show” – with an authentic element of personalization that was inspired by a new tradition: Corden’s guests will take their picture before taping each episode and sign it for his wall of fame before they walk onto set.

“With its marquee styling, the overall logo composition was inspired by Corden’s studio entrance at CBS Television City where the show is shot, as well as his eclectic set,” Chaffer elaborates. Further establishing the visual identity, T+Co created a raucous show open with an unmistakably LA vibe. Featuring Corden and Watts frolicking throughout various LA landmarks – from Venice Beach to Hollywood Boulevard – the film is a dynamic, live-action extension of the design principles behind the branding.

T+Co achieved the vibrant aesthetic primarily in-camera, using an array of shooting rigs and lighting techniques: Snorri cams which attach to the body to keep the person centered in frame; and Pixelsticks, which Watts spun to essentially draw unique fluorescent patterns on the screen.

“Pixelsticks are an exciting piece of new technology that lets you print beautiful neon designs in mid-air with long camera exposures,” explains Chaffer. “We got amazing results with them that really embodied the free spirit of the show, which dovetailed throughout the production of the open. It’s great when clients like CBS give you the freedom to experiment visually and conceptually – especially when it works.” During pre-production, Chaffer storyboarded various post-meridiem backdrops to visually connect with the logo-inspired palette – from a purple-infused beach sunset to the neon lights of Hollywood nights. With only one day to shoot, Chaffer says serendipity had a hand in realizing the visual motif. They encountered and shot LED-lit beach cruisers, a magnificent sunset on the boardwalk following a rare rain shower in Los Angeles, and, of course, Corden and Watts in a lowrider next to a street art mural.

“James is a lovely guy and a consummate professional,” concludes Chaffer. “He was always prepared during the shoot even though he had lots going simultaneously as he was gearing up for his big debut. Reggie was amazing, too – a charismatic force of nature. They both brought a lot of energy and ideas to the set to make the open exceptional and on par with the show itself.”