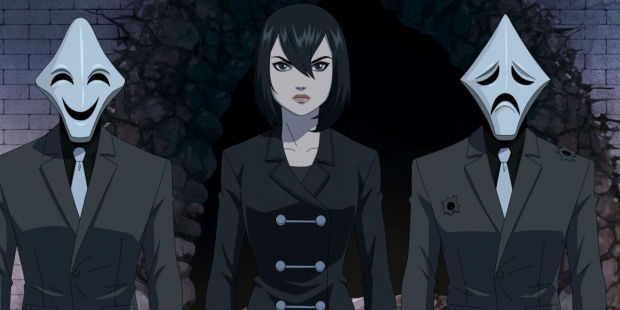 “It was the 70s, and Philippine TV didn't translate the theme songs, but we still were dancing as kids and getting into this music without knowing anything about what it was saying,” Tan recalls. “It just sounded like fun. Then, in the 80s, one of the bookstores started to bring in Moebius comics, these huge hero graphic novels, and for some reason they brought in the French translation, so we couldn’t read it. We didn't know what it was. But we were enjoying it.”

For Tan, it was the art, the characters, and the sounds of these shows that surpassed language barriers and captivated fans like him. And it was the anime Ghost in the Shell that Tan was engrossed in when he and co-creator Kajo Baldisimo came up with the story of “Trese,” the award-winning, black and white Filipino horror and crime comic book series.

16 years after its conception, Trese has now been adapted into a 2D animated series, directed and executive produced by Justice League Dark’s Jay Oliva and co-executive produced by series writer Tanya Yuson at BASE Entertainment, a film company based in Jakarta and Singapore. Trese, one of the first major Filipino anime projects to stream on Netflix, premieres Friday, June 11.

“It's been a 10-year journey with Tanya to find the best way to adapt Trese,” notes Tan. “When we found out that it was going to be adapted into anime, it suddenly made perfect sense.”

Baldisimo adds, “I just expect three hours of fun. That's all I want.” Taking place in the Philippine capital, Manila, Trese mixes gritty realism with the fantastical terror of Filipino folklore. The story focuses on detective Alexandra Trese, who assists local law enforcement in solving crimes of the supernatural variety. In the wake of her parents’ death, Alexandra - with the help of two magic-powered bodyguards and her “friends in low places” -must maintain the peace between Manila’s human citizens and sinister beasts, not all of whom are ethereal monsters.

“For me, it was big shoes to fill in the sense that this was the very first Filipino anime for a large audience on Netflix,” says Oliva. “It was one of those things where I'm like, ‘Can I do this justice?’ I have done a pretty good job adapting a lot of really big titles in the past, like Batman: The Dark Knight Returns and Justice League: The Flashpoint Paradox, that people had said were unadaptable. But I wanted to make sure that [Trese] was authentic. I leaned heavily on Tanya and the writers to help craft a story that is authentic, but at the same time, is unique.”

In their chase for authenticity, Oliva, and Trese art director Jojo Aguilar took a trip to Manila with Yuson, who had grown up in the city of over 14 million and acted as the group’s make-shift tour guide. “Being raised here, all of the mythology and the folklore was very familiar to me,” says Yuson. “When Netflix said, ‘We want this to be very Filipino,’ we were so happy. And with Jay and Jojo having grown up in the U.S., I introduced them to aspects of the culture that are talked about in the book but went much deeper than your regular tourist destinations.”

Oliva adds, “I have a romanticized version of Manila because I grew up here in Los Angeles. I didn't really know it the way it was in the books. We rode the MRT (Manila Metro Rail Transit System) and that's when Tanya told me the story about the MRT breaking down. I thought that was so crazy that it would just break down and people would just walk on these tracks. There are no railings. It’s 10 or 15 feet off the ground. This is scary, and I thought, ‘Oh, that's a great opening for the first episode.’" In the opening of Trese, a group of women celebrating their friend’s birthday exit a broken-down transit and begin their night-time trek across the elevated tracks overlooking a dark, dimly-lit cityscape. It’s the train's third breakdown of the month, and no one seems too concerned. That is, until blood-thirsty beings begin closing in, climbing up from the shadows below. Yet these vampirical nightmares are just one of the many horrors hidden in the city, from electricity-harboring skeletons to slimy sewer dwelling gremlin-like creatures.

“One of the things I really loved about the story is how Budjette and Kajo put a noir twist on the folklore I grew up hearing about,” says Yuson. “Trese’s setting gave new dimensions to how we in Manila traditionally learned about these mythological creatures.”

Tan and Baldisimo’s 2005 novel series included gore and violence shaded in gothic tones. While it was a highly original take on the culture’s deeply-rooted superstitions, Oliva says it also employed an art style incredibly difficult to translate into a modern-day anime. “The hardest thing to adapt from the original design was Alexandra’s hairstyle,” says Oliva, referring to the main character’s original short, slick, and shaggy style, with a deep V-shaped hairline. “We went back and forth trying to get it quite right. We settled on a bob with a hairline peak that wasn’t as extreme as the original. We couldn't get the animators to understand what the original version would look like and not be distracting.”

Tan adds, “Even cosplayers have a hard time figuring out how to do the hair. But I think Jay and everyone figured it out.” According to Tan and Baldisimo, Oliva, Yuson, Aguilar, and the rest of the team not only succeeded in capturing the essence of the original illustrations and story but exceeded their expectations. “I think the anime does the books justice and more,” says Baldisimo. “My mind was blown, and I still haven't recovered.”

And after well over a decade working on more than seven volumes of Trese, Tan says it was surreal getting to see their characters walk and talk as he and Baldisimo had seen, only in their minds’ eyes, for so many years.

“From the way Jay and Tanya depicted her in the show, right down to the voice, it's the voice that I've been hearing in my head whenever I would write lines for Alexandra,” says Tan. “And the other great thing that Jay has done is translate, almost shot-for-shot, our favorite moments from the books. So, to suddenly hear and see these scenes and these characters being played back to us, it feels like we’re in a dream.”

“One of the most special things about this project, no joke, is really that all the people who have worked on the Trese anime are all fans of the book,” adds Yuson. “We're all fans of what Budjette and Kajo have created, so everybody brought their A-game and was very excited to work on this. That made the difference, and you could feel it every day. It's been a really joyous experience.” Oliva hopes that Trese will pave the way for more Filipino animated films and TV series to find a home on Netflix and other streaming platforms. “I'm hoping that this will open that door wide, or at least nudge it open, because there are so many great storytellers and great stories from the Philippines that are just waiting to be told,” Oliva notes. “There's so many more stories that Budjette and Kajo and Tanya and I want to tell in this world as well.”

Thinking back to his time as a child, watching anime and indulging in superhero comics, Tan's personal wish is that Trese has the same captivating effect on its mature audience that the cartoons of his youth had on him. “I hope that same sense of wonder that I felt as a kid - hearing these Japanese theme songs or seeing these French graphic albums - is there for others watching Trese,” he shares. “And for them to enjoy it so much and love it so much that they would again want to see more from our country.”

Dude! - ‘Rise of the Teenage Mutant Ninja Turtles: The Movie’ Arrives
‘Super Giant Robot Brothers’: A Milestone in Virtual Animation Production
‘Luck’ Aims to Bring Hope to Kids In and Out of Foster Care
Pre, Tech, and Post: The Many ‘Vizings’ of ‘Chip ‘n Dale: Rescue Rangers’
Hammering Out the VFX in ‘Thor: Love and Thunder’
‘DC League of Super-Pets’: A Family Film Produced by a Family
‘Light & Magic’: ILM’s Story of Family, Fun, and Pioneering Visual Effects
Eric Goldberg and Mark Henn Talk the Magic of Hand-Drawn Animation
END_OF_DOCUMENT_TOKEN_TO_BE_REPLACED