Written and directed by the Emmy Award winning artist, the CG film, based on a tragic loss, follows a horticulturist-astronaut trying to survive after crash landing on a desolate dwarf planet; it debuts today on Apple TV+ 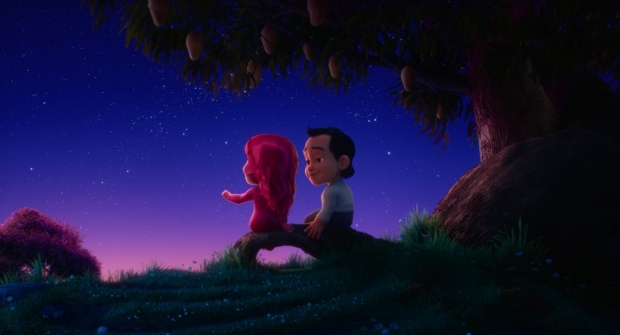 We know all too well the seven stages of grief. Now imagine working through them while writing and directing an animated short film based directly on a devastating personal tragedy. But that’s exactly what Emmy Award-winning artist and filmmaker Joe Mateo (Prep & Landing, Big Hero 6) put himself through with his brand-new CG animated short, Blush.  An Apple Original Film, the inaugural Apple/Skydance Animation short debuts globally today on Apple TV+.

Blush follows the journey of a stranded horticulturist-astronaut, struggling to survive after he crash lands on a desolate dwarf planet. When an ethereal visitor arrives, the once-lone traveler discovers the joy in building a new life and realizes the universe has delivered astonishing salvation.

First take a look at the trailer, then take a few minutes to learn more about Mateo’s film, the tragic loss that inspired him and his insights on the importance of surrounding yourself with, and learning to rely on, your friends and family. And note, there are a few spoilers in the interview below.

Dan Sarto: Blush is a highly personal film. Share with us a bit about the genesis of the story and why you decided to tell this particular story.

Joe Mateo: Well, it started when I lost my wife Mary Ann four and a half years ago to cancer. And that same night, I couldn't breathe and had to call a doctor friend of ours, who let me know I was having a panic attack, which I'd never had before. I didn't know what was happening to me. It was really scary. And that's where the idea kind of came from. I went through that rough time and was very fortunate to be surrounded by the people I love, including my two kids, that became my big support in everything. I just wanted to share this message of healing and hope, and [in facing difficult times] what you have to do is surround yourself with people you love. That was the way to get through what I'd been through.

DS: I can't imagine what that was like. All I can say is that I can appreciate how you dealt with your grief by working through it with your art and storytelling.

JM: Mary Ann and I were both passionate about animation. And to be honest, I kind of struggled to go back to work after she passed away. So, thinking of telling this story kind of helped me with that. It became therapeutic for me. It made me look back to how we met and all the good times we had. Remembering all that was very helpful as I was kind of stuck with the moment of like losing her.

DS: Did you bring the short to Skydance? Was the studio looking to make a short?

JM: No. I met with John Lasseter when he started at Skydance and I him about what I'd been through, my idea for a short film, and my reason for wanting to make it. And that's all I had to say. He got excited. It was around two months into working at Skydance that I shared with him the details of the story. After hearing it, he said we have to make the short… we're making the short.

DS: Well, if anybody is going to support shorts, it’s him.

JM: Definitely. That's the thing with John. He gets the value of making shorts, even though it's not a box office thing. And, with Skydance Animation being a new animation studio, we could test the pipeline by doing the short first. DS: What inspired the look of the film?

JM: I wanted it to be charming. I like drawing cute characters, and wanted the film to be charming, but realistic, to make you think, does this place really exist, though stylistically, it's pushed. That's what I was aiming for, to create this planet that people would want to visit all the time. I just wanted to create someplace special.

Also, if you notice in the film, there's a lot of spiral deco shape design language. Our art director over in Madrid, when he was working on the tree, came up with that spiral design that kind of spread all over the movie. It became our basis of everything having to have a spiral. When we get to the point where she's kind of disappearing, the spiral, it's a symbol of life… so that spiral, while she's going away, it became a moment of not her disappearing, but a celebration of her life. When I first saw that, I was like, “Oh my God.” It was a big breakthrough design-wise.

DS: Were there ever any thoughts of doing in 2D?

DS: How long did it take to produce, and how big was your crew?

JM: It took about a year and maybe two months from beginning to end. It started with a small group of people, less than 10, and grew from there. When we started, people were working on it as a side project. I'm sure you're familiar with shorts. It's like your second job, right? This was everyone’s side project, until we realized when we had to go through other departments, we started getting more attention and more focused. It grew from there.

DS: I understand how this must have been a difficult project, just from an emotional standpoint. What was toughest for you on the film?

JM: It's hard to talk about this very matter-of-factly. It's hard not to get emotional because, you know, it's so personal. There was a specific moment where I had to review that scene of her disappearing and I barely managed to do it on the Zoom meeting. But then I realized that I was in a safe space; all that support I got from people through Zoom was overwhelming. And from then on, I just felt so comfortable, surrounded by, and feeling the love of my crew. It was very special.

JM: You know, the challenges I was anticipating didn't happen. With a feature, you have a lot of challenges with figuring out the story. But with Blush, we were so blessed to have a reel put together pretty early on, cut together with time cues, that really worked. So, we had a great blueprint going in. Some of the challenges were just figuring out the pipeline, because as I said, initially people were working on it as their second job. But, once we got the pipeline down, everything ran smoothly. And I loved my experience making it.

Going into this project, I didn’t want any stress. I didn’t want any negative baggage after making the film. And that was probably wishful thinking on my part. I've been in animation for 27, 28 years now. And this is the best experience I've ever had making a movie. I’m so blessed to get so much support, from all the people at Skydance, and with Apple. And I'm so excited that the film is going to be seen by millions of people globally through Apple TV+.

Choc Chip Animation Riffs on Pop Culture in ‘The Art of Murder’
F is for Flake: The (Not So) Great Animation Robbery?
Re-VIEW: ‘Avatar: The Way of Water’ – A Miraculous Vision
‘Kung Fu Panda: The Dragon Knight’ Celebrates a Special Lunar New Year
END_OF_DOCUMENT_TOKEN_TO_BE_REPLACED