The in-person/virtual hybrid event featured a host of presenters, panels, and Q&A sessions with speakers sharing thoughts on the future of animation, personal anecdotes, and plenty of salient career advice. 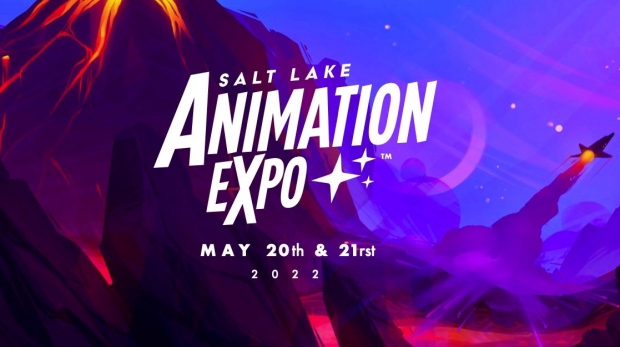 Ron Friedman animated on Doctor Strange in the Multiverse of Madness, Loki, Shang-Chi and the Legend of the Ten Rings, and The Suicide Squad. He has worked for Industrial Light & Magic, Electronic Arts, Disney Interactive, and Reel FX, among others. He has taught at three schools including Harvard University. He has been an animator for 30 years.

He is an art school reject.

In response to being turned away from the halls of academia, Friedman, a senior animator at The Third Floor, interned and then became a cleanup artist on Richard Rich’s The Swan Princess. Being a cleanup artist “wasn’t what I wanted to be doing, but it was an in to a union shop and it led to potential opportunities down the road,” Friedman said during a presentation as the Salt Lake Animation Expo, held Friday and Saturday, May 20-21 in Draper, Utah.

From there, he added “one thing led to another” and he was able to “finally” get a job at one company, which led to his 30-year career in animation.

While many animators want their work to be seen onscreen, Friedman said, “I don’t care about that. I would much rather be involved early and get to be part of the creative part of it.”

And, by embracing working in previsualization, where animators get “the initial ideas” and “the overall action” down, Friedman has gotten his share of opportunities, he noted.

Friedman’s talk, where he shared his art school rejection, was one of 15 main-stage presentations at the expo, where a variety of animators and creators shared many ideas and experiences. They included Michael Knapp, a self-employed visual development artist; Mike Morris, a principal creative director at Amazon; Christopher Travers, a co-founder and the chief creative officer of Virtual Humans; Kelly Loosli, co-founder and director of the BYU Center for Animation; Scott Wiser, the director of art and animation for Spacestation Animation; Matt Watts, a contractor with Disney Television Animation; Jacob Moreno, a 3D lead animator at Pura; Mark Galez, an episodic director at Netflix; Moroni Taylor, a storyboard artist; Adam Sidwell, founder of Future House Studios; Shawna Schultz, co-founder and CEO of Mass FX; Matt Schultz, co-founder and executive creative director of Mass FX; Bill Rogers, creator of Mighty Man; Brian Ericson, animator of Mighty Man; Eric Elrod, an adjust professor at the California Institute of the Arts; Jordyn Curley, a creative producer for Harmon Brothers; Colin Jack, a head of story for DreamWorks Animation; and Zach Atherton, director of ImprovBroadway. Besides working on Spies in Disguise, Robots and Horton Hears a Who, Knapp was an animator on the five Ice Age films. He talked about creating Ice Age: Scrat Tales, a series of six shorts that continues Scrat’s adventures in pursuing beloved his acorn, as first seen in Ice Age. In early 2021, Disney shut down Blue Sky Studios, where Knapp worked on his most well-known projects. He still somewhat grieves its closure. “We were doing something that was more than a job for a lot of us,” Knapp said, pointing out that former Blue Sky employees completed Scrat Tales even though the studio was shuttered. While it was only a few weeks from completion, the former employees needed to create reels, find new jobs and put their homes on the market.

“Scrat Tales would be finished and become a fitting if bittersweet bookend to Blue Sky’s legacy,” Knapp said. “Like Scrat, we were determined to not give up, no matter what.”

Knapp said he appreciated the kind of collaboration he experienced, noting, “I don’t regret a thing. I could have lived without Collision Course (the fifth Ice Age film), but overall, I loved every moment I was there and everyone I worked with.”

A video one of Knapp’s colleagues created of Scrat eating the acorn leaked online. Knapp said he was glad it did because he doesn’t think Disney would have allowed it to become public. Morris shared how he detained by a Universal Studios security guard inside the studio’s Psycho Bates Motel replica while he was on a crew shooting a Super Bowl commercial at the park. He had enjoyed seeing shooting locations for Apollo 13, Jaws, the Back to the Future town square with the clock tower seen in the film, and How the Grinch Stole Christmas with Jim Carrey. It was as he was walking past Whoville that found himself being remanded into the hotel replica.

“Don’t get detained in the Bates Motel,” he said.

While Jackson “could have been so full of himself,” he asked about the crew’s families, besides giving them hugs, Morris revealed. “He was an absolute rock star to work with. He didn’t come across as the best person in the room.”

Morris noted that “not being so” is a lesson he learned from a colleague named Tim Coleman. “I found that the best people in the room are the ones who are the most stagnant. They are also the ones who become really egotistical.” He added while he has worked with great people in his career, “they knew they were the best one in the room, so they were terrible to work with. I would hands-down take someone who was 25-30% less talented.”

He also mentioned he appreciated another colleague named Steve Driggs telling him, “It’s just advertising” when Morris worked 100-hour weeks for a month straight, sleeping in agency offices, living chicken nuggets from the McDonald’s around the corner, only heading home to shower. “It doesn’t matter; we’re not saving lives here,” Driggs said, according to Morris.

Travers is contributing to the increase in “virtual influencers” – characters who have a strong following online. He had a conversation during his presentation with Zero, one of Travers’ company’s creations.

Virtual influencers are the next celebrities, Travers said. After confirming that no one in the room where Travers was presenting had met Kim Kardashain or Justin Bieber, Travers pointed out that the two celebrities became famous despite hardly any fans meeting them, due to the internet.

Virtual influencers can look “hyper human” or humanoid or can be “animals,” he explained. “Like, these characters can be any shape and size.”

Travers also said there is a “movement” in the last two years given the popularity of video as seen on platforms like Twitch, and that social interests are strongly becoming multiplayer social networks. And in a reality of the type that virtual influencers don’t face, Kardashian will age out relevance and “the Kardashian cinematic universe will have to live on through her children,” Travers said. Loosli, who worked for DreamWorks, said he has a friend who had to sleep under his desk in a sleeping bag while working 16 hours per day, seven days per week, for six straight months. He did it while working for Industrial Light & Magic on Pirates of the Caribbean: Dead Man’s Chest and Pirates of the Caribbean: At World’s End, which were made back-to-back. He quit ILM shortly after that.

Loosli asked colleagues their advice for students and early-career individuals attending the expo. Dan Hahn, a producer for The Lion King, Beauty and the Beast and The Hunchback of Notre Dame, said to “Always put the story first” and to “hire experts and let them do their thing.”

Wiser, who used to do theater, sang When You Wish Upon a Star to begin his presentation and Mama Says later in his talk. A member of the audience walked to the stage and shook his hand during the Q&A portion.

The animation platform needs to be improved, Wiser said, referencing one expert who said he felt like the last great year for films was 1984. “If we are not living in the golden age, we need to bring that out,” he said while adding that those in the animation industry need to learn from those before them. He referenced a quote that said that such individuals need to stand on Walt Disney’s shoulders, not sit in his lap. “Let’s build like Cecil B. DeMille did,” Wiser added. Watts, a former instructor at Utah Valley University (who got a degree in architecture), put his animation skills on display for the audience while presenting with Moreno.

Moreno said that breaking into the animation industry “comes down to hard work and consistency.”

Galez, who has also worked for Nickelodeon Animation, Cartoon Network and Blue Sky Studios, spoke to the cycle of burnout in the age of social media. Though he asked the audience at the end of his presentation to follow him on Instagram, Galez talked about how much “validation” he sought on social media – “I got addicted to it,” he said – and that all the projects he wanted to do after walking away from a job – a graphic novel, a YouTube channel, a podcast, which Galez called “an impossible amount of work” – never happened.

Getting the audience to laugh many times, Taylor, who has been a storyboard artist for Iron Giant, Spies in Disguise and the five Ice Age films, said it is key to be funny and make the main character of a story compelling. Taylor also talked on two occasions about working with famous director Brad Bird.

Sidwell, who has worked for Industrial Light & Magic (twice), Digital Domain (twice) and Sony Pictures Imageworks, recalled entering ILM when working on the Pirates of the Caribbean franchise. At the studio’s entrance is Darth Vader and Boba Fett. Then there are stormtroopers. R2D2. “Actual replica stuff” from 1979.

And, as Sidwell walked into ILM, Star Wars creator George Lucas stood right before him. But Sidwell didn’t say anything to him. “There’s a rule at work – don’t talk to George,” Sidwell said, adding that’s because Lucas is shy. As Shawna and Matt Schultz, who did graphics packages for Friends: The Reunion and The Social Dilemma, presented, Shawna Schultz told the audience to “use your powers for good.”

“Ultimately, the future only holds more power for us in post-production,” she said. “We can fake worlds. With this power comes great responsibility.”

Matt Schultz then said that “robots will inevitably take over” the work he, Shawna and others do.

Rogers and Ericson spoke on lessons they learned from making Mighty Man, including “Be wise and manage money well,” “Network” and “Have difficult discussions.” Elrod, who was a director for DreamWorks, Marvel Studios and Blue Sky, broke down storytelling in The Matrix, Jurassic Park, Jaws and Star Wars according to pillars of storytelling methods.

Friedman, Galez, Taylor, Elrod, Curley and Jack talked on a panel about the future of story. Noting how there is an audience for any type of video content, more than one of the panelists talked about the appeal of YouTube videos of chickens.

Elrod shared that while it’s always said in Hollywood that a character has to be likeable, Hannibal Lecter draws in audiences but isn’t likeable. Friedman said that as compelling villains, Maleficent and Cruella de Vil do the same things.

Taylor said he didn’t understand what Blue Sky was trying to say when it wanted Sid, a protagonist from Ice Age who is a sloth, to be in a hot tub with female sloths. He asked if it’s “cool” when children are seeing the film, saying it would have worked if it was a Hangover film.

“What is the audience?” he asked. Atherton’s writing team at the advertising agency Harmon Brothers will go on a two-day retreat, putting their cell phones in a basket and leaving them behind. It costs $20 to look at a phone during the retreat, he said. “If the kids break their legs, that’s what grandparents are for,” the comedian added.

Atherton and the agency also provide writers at least 40 paid hours of writing time and at least one read with a creative director for feedback purposes.