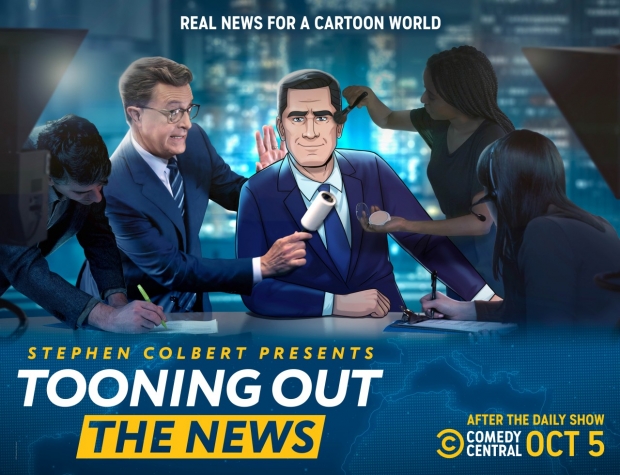 Launched in April of 2020 on CBS All Access (soon to become Paramount+), the animated satirical news series Stephen Colbert Presents Tooning Out the News has since then been providing a “daily dose of biting animated satire, deftly written, edited, animated, and assembled within a 24-hour period by a universally sleep-deprived animation production team.”

Tooning Out the News features a cast of animated characters, led by anchor James Smartwood, who mock the news of the day, interviewing real-world guests, newsmakers, and analysts. For its third season, the show has moved to Comedy Central, where, appropriately enough, it will occupy the time slot once belonging to The Colbert Report.  It was created and is executive produced by Stephen Colbert, R.J. Fried, Tim Luecke from Showtime’s Our Cartoon President, Zach Smilovitz, Mike Leech, and Nicole Savini, and is produced by CBS Studios. You can find the first two seasons streaming exclusively on Paramount+.

We spoke with creator/exec producer Fried about Season 3 and about the ongoing challenge of finding the proper balance between serious subject matter and funny stuff.

But first, check out the Season 3 promo:

AWN: Our country’s politics remain dreadfully unfunny. How have things changed for you and the series in the new season?

R.J. Fried: The biggest thing is being on Comedy Central after The Daily Show. It's something we've kind of always had our eye on, and it just felt like the right place for this show. And so we're truly honored to be there. It's also exciting to be in the old Colbert Report time slot, considering Steven's involvement. He's been intimately involved with the show and so responsible for the voice of it. Also, the cable news landscape has evolved, and so the show has evolved with it. We'll have a new look this season that taps more into the CNN style of programming. And the “Virtue Signal” segment is going to have some new characters that reflect what’s been going on in liberal media, which has also evolved. Ultimately, we're a satire of real news, and so that's where we take our cues from.

AWN: When we spoke back in 2020, you mentioned that the show is always trying to strike a balance between funny and glib, and that striking that balance is one of the main challenges you and the other producers face. How's that battle going?

RJF: Ultimately, these are extremely serious issues that affect the lives of many sectors of our population. It's not just water cooler stuff. And so we want to always make sure that our targets are correct, that we're not being flippant about an issue. The good news is, coming into this season, I feel like our audience has an expectation of how we're going to handle things, and that there's some level of trust. Animation is really equipped to handle these sorts of things and to help the medicine go down a little easier. So we certainly take advantage of that, and we appreciate that our audience trusts us with these really tough issues.

AWN: With such a hyper-partisan landscape right now, it would be easy to say that you obviously skew toward the left, but that isn’t necessarily fair or accurate. How do you adjudicate where you sit?

RJF: We try not to look at the political landscape as left vs. right, and I don't know if that's even the proper way to classify our politics. I think what’s probably more significant is top vs. bottom, those in power vs. the powerless. When we're looking for writers, we try to avoid people who are simply partisan and can't see the problems with the party that they belong to. You could argue that one side of the aisle is doing more damage than the other, but ultimately there are problems across our political spectrum that are structural, they're institutional, and that's how we approach this. AWN: Along those lines, how do you negotiate who gets to be on the show, and how do you handle guests in a way that won't preclude others from wanting to come on the show? Or is that not a problem?

RJF: Thankfully, it hasn't been a problem. We're very upfront with our guests about what the show is and, hopefully, they’ve seen the show or maybe The Colbert Report, and they know what it's like to interact with characters. We ask them to come on and disabuse our characters of their ignorance and to correct the record. We don't selectively edit them or anything like that. They get an opportunity to give their answers. We get an opportunity to say our jokes. But we do our research and make sure that we're not being unfair. If we do throw a punch, we make sure that we believe in it.

AWN: Let's talk a little bit about the production itself. In our last interview, you walked us through the process of putting your show together, and I remember thinking, I'm exhausted just listening to this, let alone being part of it. Is the pipeline still pretty much the same or has it evolved since then?

RJF: We had the opportunity to put together some 250 episodes of the show during our seasons on Paramount+, so there are many systems in place that make it efficient. The machine is up and running. That said, it's still wild to see how many different departments are involved – graphics, animation, writing, research, talent booking – along with all the producing glue that goes between them, all at a very fast pace. One of the cool things that's happening this season is that Tim Luecke and Stephen Brooks are overseeing our animation side, and the characters are looking even more sophisticated. They've started to add parallax effects to their faces, which looks awesome and is really bringing them to life. I should also credit Nicole Savini, who is the executive producer behind the whole machine. Luckily we have an awesome team who's made it pretty smooth so far. AWN: Is the team able to work together at all in an office yet, or are you still working remotely?

RJF: Most of the staff is remote, but a lot of the animation team is in the office, so it's a hybrid operation – if people want to be around other people, they can. But we have people in cabins in upstate New York and all over the country. It's great that people don't have to live in Manhattan or Los Angeles to do this job.

AWN: I don’t know how I could not have known this, but I just became aware that you voice James Smartwood. Does doing the voice work give you a little reprieve from all the other stuff, or is it just one more thing you have to do?

RJF: I'm not a trained actor or performer like most of our voice talent, so for me it takes a certain mindset. I really have to shift my brain from writer/producer mode to “OK, I'm doing a performance and I have to be in the moment and I have to feel like I'm in the studio and what is that like?” Like any showrunner, I wear so many different hats, and I just really have to shift my brain into that mode. That said, I have a ton of respect for performers and what they do to prepare and deliver a good performance for every episode.

AWN: The animators on the series just voted to unionize. What’s your take on that?

RJF: We love our animators. They work hard. A few of our exec producers, including myself, are union people, members of WGA and SAG. So of course we want to support them as they work to get the benefits and compensation they deserve. I'm not sure where the process goes from here, but I think it's always a good thing when hardworking people are taken care of. AWN: What do you hope people take away from the new season?

RJF: The one thing that drives so much of what we do is trying to find the truth in all of these different issues. Of course, we work hard to make sure that we have original takes and original jokes. But the thing that I think is exciting – for this new season and what we’re always after – is getting across what we think is going on.

AWN: Is there anything else you want to share about the new season that we can look forward to?

RJF: As you know, it’s a show that comes together very quickly and a lot of times the things you plan – when you get to the air date – just feel stale. I can tell you that we're still going to have “Big News,” “Inside the Hill,” “Hot Take,” “Virtue Signal,” and a “Smart Talk Tonight” with George R. R. Martin. But there's no scripts for those shows. The show that you’ll see tonight on Comedy Central will have been written right up until delivery. It's very exciting to write as a guest is climbing into the chair ready to record. And hopefully the audience will feel that.