A Tomboy and Her Yeti: ‘Abominable’ Charms Audiences Across the East-West Divide

The Annie and Critics’ Choice Award-nominated feature from DreamWorks Animation and Pearl Studio shows that in the right hands, a U.S. / China co-production can resonate with all audiences and find international success. 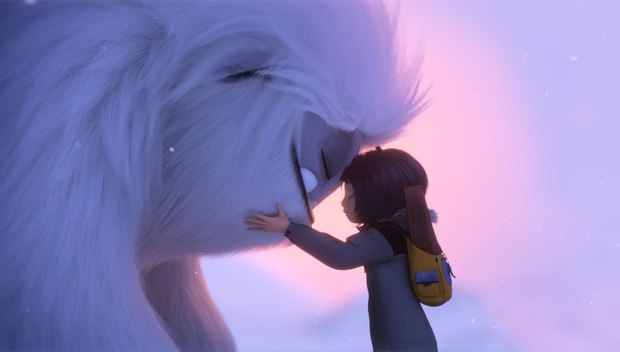 With four Annie Awards and a Critics’ Choice Award nomination in hand, Abominable, the DreamWorks Animation / Pearl Studio, U.S. / China co-production, is now available on 4K Ultra HD, Blu-ray, DVD and digital; released in theatres this past September, the film has generated more than $177 million at the global box office, including more than $60 million in the U.S. and $15 million in China; its $20.9 U.S. / Canada opening weekend was the largest of any original animated film in 2019.

The movie marries many themes Culton had always hoped to address in film at some point during a career in animation spanning almost 30 years. Themes that date back to her childhood as a tomboy surfer and skateboarder in a California beachside town, growing up on a diet of “princess” movies and TV shows that she never quite related to. Throw in the fact she’s one of only a handful of women given the reigns on a big studio animated feature film - Jennifer Yuh Nelson (Kung Fu Panda 2 and 3), Jennifer Lee (Frozen, Frozen II) and Brenda Chapman (Brave) are three who come to mind – her successful weaving of those themes into a film set in China, with an Asian cast, that had to resonate with audiences everywhere, gives you a sense Abominable is not your typical animated film and that Culton’s achievement is quite significant.

“I wondered if I would get a lot of pushback on the fact that I'm not an Asian director, but am directing a film that's primarily Chinese,” she shares. “People say to me, ‘How did you feel directing a film that had a predominantly Asian cast?’  I say to them, ‘Well, there may be a predominantly Asian cast, but the subject matter is really a minority.’ I can tell you, as a female filmmaker who had the desire to make a film about a tomboy, not a princess, a girl who doesn’t fit in the normal classic structure of what a female role model should look like, I feel like I am the minority here.”

With that said, the fact remains, she is an American writing and directing a film with Chinese characters on an epic journey across China, with a mostly Asian cast; her greatest challenge was always going to be ensuring her characters, their story and how their were depicted would be culturally authentic without pandering to either Western or Eastern audiences. “The feedback from critics and audiences, we’re all really happy with the film,” she continues. “You do these things as a labor of love; there was a lot of me in this film.  The fact that it touched so many people is a testament to when you really dig deep into things that mean a lot to you, it always resonates with other people.”

Culton goes on to share credit for the film’s successful depiction of Chinese people and their cultural sensibilities with her co-production partner, Pearl Studios, noting enthusiastically, “I've said this many times… I don't think we could have made a film this authentic without our partnership with Pearl.” Describing examples where the collaboration was crucial to her storytelling, she notes that “there is so much nuance throughout this movie, like the cultural etiquette around a dinner table, or removing your shoes at the front door, which is pretty common in China.” She adds, “We animated a scene where Yi kind of turned her back on her mom too much. Pearl artists said, ‘That's going a little too far. That’s not polite behavior in China.’ They helped with everything from design to etiquette. They were crucial in helping create an accurate portrayal of a Chinese family that would appeal not just to Chinese audiences, but to audiences all over the world. I'm so proud of our partnership. Pearl’s efforts ensured Chinese audiences were never pulled out of the film, feeling that this was a movie made by an American company. They were completely sucked into the story.”

What the film means for future Chinese – Western studio co-productions? Hard to say. Each day it seems the landscape changes, both culturally and politically, not just in the Chinese entertainment industry, but in China’s complicated relationship with the U.S., let alone the rest of the world. However, Chinese studios notoriously scrutinize any domestic industry success and are sure to try and take full advantage of any lessons learned about how Pearl has been navigating the choppy waters of big-budget animated feature co-productions. Abominable itself saw some controversy during its Asian release when protests were voiced regarding a scene showing a wall map that included the “Nine-Dash Line,” a highly-disputed, vaguely demarcated line the Chinese government uses to define its claim to a major section of the South China sea. The film was banned after a short release in Vietnam. Universal refused to cut the “offending” scene; the film was subsequently banned in the Philippines and Malaysia. The map dispute cuts to the quick of an issue of intense geo-political tension; it’s hard to assess whether or not DreamWorks, Pearl or Universal considered the map prove provocative. It’s also hard to believe someone at some level didn’t consider the potential for uproar. There’s no doubt the controversy adversely affected the film’s Asian distribution; even so, the risky co-production is considered a success by the studios and industry.

“Hollywood is still the hub for filmmaking and partnerships between studios and China,” Culton explains. “When Hollywood caters too much to try and grab the Chinese market, the shows don’t necessarily feel authentic. We need the partnership on the Chinese side.  With Western studios and the growth of studios within China, there will be more and more partnerships, with DreamWorks’ and Pearl's as a good example. These types of productions are going to ramp up; Pearl’s projects with other Western studios is a perfect example of making smart choices for these types of films.”

The Abominable DVD includes a host of fun extras and bonus features, including DreamWorks Animation’s latest short film, Marooned, the third release from the studio’s Shorts Program. Marooned tells the story of a cantankerous and selfish robot named C-0R13. Stranded on an abandoned lunar outpost, C-0R13 longs to return to Earth; upon accidentally stumbling on a deactivated robot named A-L1C1A, his character and his mission are put to the test when his naive little friend helps him learn what it truly means to be selfless.

Culton especially enjoyed the behind-the-scenes shooting she and the cast did in support of the DVD material production. “The DVD extras captures a little bit of that spontaneous side of our cast and crew that no one really gets to see,” she reveals. “It’s a little peek into the interactions of directors, cast members, producers and everyone that's involved… how we acted on a regular basis. That's my favorite part. It's so off the cuff, us just playing around together. We were such a great team together. We laughed a lot, you know, just every day when we were making this film.”

The director is confident that people who purchase the DVD or digital download will enjoy the film “I feel we made a really good movie,” she concludes. “The subject matter deals with grief and it touches a lot of people. As filmmakers, we always hope to create something that challenges us to think, something that can change the world a little bit. And with Abominable, I feel like that really happened. Which is pretty great.”