Titmouse Shoots for the Nebulas in ‘Star Trek: Lower Decks’ 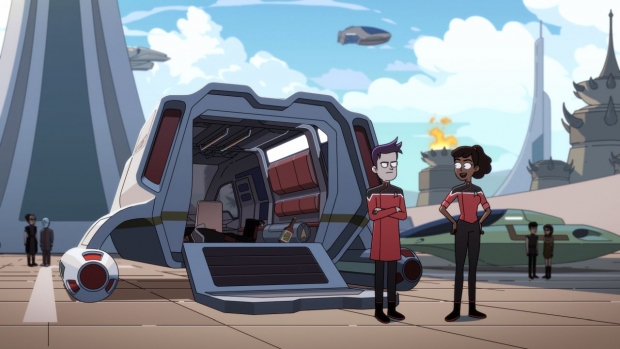 With yesterday’s premiere of Mike McMahan’s new animated comedy, Star Trek: Lower Decks, CBS All Access ushers in a new era of Starfleet exploration, adventure… and completely mundane “Second Contact” work assignments. Following the lives of a group of “scrappy” ensigns aboard the U.S.S. Cerritos, Star Trek: Lower Decks cleverly shows that workplace comedies can indeed boldly go where no one has gone before.

That’s a lot of phasers set to stun.

Produced by Emmy Award-winning Titmouse, the animation production powerhouse that seems to be growing faster than a bamboo rainforest during a really humid summer, Star Trek: Lower Decks takes full advantage of the studio’s growing expertise at creating big, bold, beautiful 2D animation… and lots of it.

For CCO Antonio Canobbio and Barry Kelly, supervising director and episodic director, staying true to the iconic Star Trek franchise’s design standards proved challenging, if not almost impossible. But they found their visual development spot within the Star Trek series world and stuck to it.

According to Canobbio, “The legacy is huge and there are so many design standards and contradictions in the Star Trek universe that it would make your head spin. We established that Lower Decks took place after Star Trek: The Next Generation so that’s where we started. The initial design is based on the principals that Michael and Denise Okuda created for ST: TNG. The LCARS! What if they designed the whole ship! What if those swooping shapes were part of the overall architecture of the ship? Retrospectively it was an easy decision for us to make, after all it is the biggest design gift TNG gave me!”

“When looking at the U.S.S. Cerritos, we don’t want it to look like a ‘cartoon’ version of a starship,” Kelly says. “We want the audience to just see a cool starship that could easily pop into the live-action world and fit in comfortably.  The ship is the icon for the show, and its design tells what era we’re in. We’re in a very beloved Next Generation era from the ‘90s, which has us standing on the shoulders of amazing sci-fi designers of the time. Our work was vetted through many Star Trek’s experts, who weighed in on how the ship’s functions work, from the turbolifts down to the color of the graphics on the LCAR screens.”

“We can’t forget Star Trek: The Animated Series!” he continues. “The series is canon, so we honor it and bring it into our designs if it feels right.” Canobbio’s role on the show is to guide his team in coming up with “the style,” always working to find the balance between “too simple” - making sure they respect the Star Trek legacy in every detail - and “too complex” – making sure they tell the story and animate all the craziness written in the script. “This is always the challenge,” he says, “and I think in the case of Lower Decks, we were extremely successful.”

Wearing his episodic director hat, Kelly leads a team of board artists that take the script, break it down into sequences, and come up with ideas on how to best execute the story. “From there, I look at thumbnail drawings, then review with the series creator and showrunner, Mike McMahan, and the writers until we arrived at a very funny animatic,” he says. Wearing his supervising director hat, Kelly sends the animatic to his “amazing animation team at Titmouse Vancouver,” where they break it down into shot by shot chunks for animation and comp. He adds, “Then my directing partner, Juno Lee, and I sit in on daily meetings where we steer this big ‘ship’ of artists and their work. We review hundreds of shots a day, all in varying degrees of completion, rough animation, clean animation, comp tests, FX tests. It's all baby steps that add up to a finished 22-minute show! Then we do that 10 more times for 10 episodes.”

With more than 700 artists (working remotely) in L.A., Burbank, New York City and Vancouver facilities, and a recently announced multi-year first look rights deal with Netflix, the studio behind shows like Big Mouth, Midnight Gospel, Metalocalypse, and Mao Mao: Heroes of Pure Heart has been exceptionally busy. Canobbio acknowledges the growth, noting, “We do a lot these days, and the studio has never been busier. But what can you really do when you are offered such cool opportunities? Take them.” Barry agrees, adding that Lower Decks benefits from the large base of artistic and technical talent they’ve developed through the studio’s deep and varied project portfolio. “The talent pool and variety of projects at Titmouse is super diverse,” he shares. “We produce commercials, kids programming, adult programming, comedy, horror, all the way to high-end anime action. We were able to bring on those amazing artists to produce the best Star Trek show possible.” Sharing that the decision to take on the show was a “no brainer,” Canobbio says, “The Lower Decks scripts are hilarious, and we are fans of Star Trek. We did most of the production within our walls, and while the process is exhausting, it’s the best way to achieve a show to this level of quality.”

The studio employs considerable effort to push the idea of what an animated Star Trek comedy can be. “The scope of the show is far beyond a standard sitcom cartoon,” Kelly explains. “There’s a certain style that audiences expect when they see a sitcom; we want to start from that familiar base and then journey into unexplored comedy territory for Star Trek.”

Creatively, for the pair, the biggest challenge has been balancing the humor with the science-fiction. “Maintaining the balance between sci-fi and comedy is a challenge,” Kelly admits. “When I’m boarding a scene, with every shot I ask, ‘Is this a ‘comedy’ shot or a ‘Star Trek’ shot?’ What's the moment here? What ‘mode’ do I need to be in? We need the drama and action to play serious and straightforward, so the comedy comes out even stronger. Telling a joke, the ‘right’ way takes focus to get it perfect. Getting the drama and action to the same level is also a challenge.” Reflecting on the significance of producing the first adult animated comedy in the Star Trek franchise’s 54-year history, Canobbio states, “As I said earlier, we aren’t faking our fandom. And the biggest fan of all of us is the guy who created this project, Mike McMahan. I see this project more like a love letter to Star Trek than a satire.”

“The characters are the special ingredient,” Kelly concludes. “We’re never making fun of Star Trek; we love Star Trek. The humor comes from the characters, much like in the original series! The thing I enjoy most when re-watching Next Generation is how funny the characters are in their day-to-day interactions with each other. In that cake of moral dilemma, there’s chocolate in the center of the heart and comedy that makes people love these characters -- that's what makes Lower Decks so special.”

‘My Dad the Bounty Hunter’: Representation Beneath the Skin
The Massive Creative Fellowship Behind ‘The Lord of the Rings: The Rings of Power’
‘The Dragon Prince’ Director Villads Spangsberg Talks Toonlines and Tough Challenges
Laurence Fishburne and Steve Loter Talk ‘Marvel’s Moon Girl and Devil Dinosaur’
Taking an Old-School VFX Approach in ‘All Quiet on the Western Front’
‘Natural Habitat Shorts’: Like ‘Ranger Rick,’ But for Adults
Framestore Sets Sail on ‘1899’ with New Virtual Production Tools
VFX is the ‘Thing’ for Tom Turnbull on Tim Burton’s ‘Wednesday’
END_OF_DOCUMENT_TOKEN_TO_BE_REPLACED