Titmouse: A Chat with Chris Prynoski 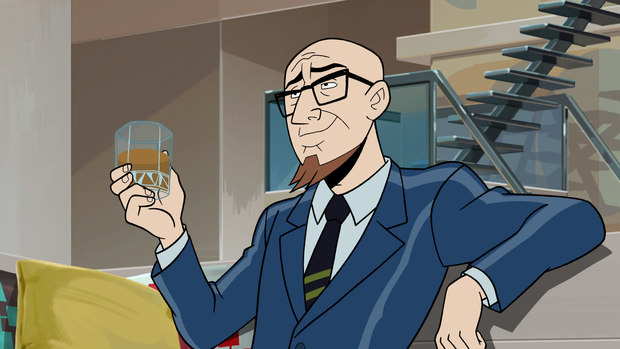 Season 7 of ‘The Venture Bros.’ launches at midnight on August 5 on Adult Swim.

This year’s Annecy International Animation Festival wasn’t all hustle and bustle. Nestled above a quaint row of popular restaurants, one was able to find a discreet doorway leading to a calm and spacious two-floor hideaway decked out in minimalist chic with polished concrete floors and a generously stocked refrigerator. Why, yes, thank you, I will have a cold beer. Titmouse founder Chris Prynoski is an affable host, sporting a vintage Dungeons and Dragons t-shirt and signature bucket hat emblazoned with the Titmouse name stylized to look like the Budweiser logo. The sweat evaporates. No one minds that we’re late. The crowds and oppressive summer humidity of the French Alpine lakeside town quickly melt away.

Emmy Award-winning Prynoski is the president and founder of animation production company Titmouse. With offices in Los Angeles, New York and Vancouver, the studio has animated more than 35 television series to date, including DreamWorks Animation’s Captain Underpants and HOME for Netflix, Little Big Awesome for Amazon, Breadwinners for Nickelodeon, and Future Worm for Disney, as well as more adult fare such as Black Dynamite and The Venture Bros., and that number is soon expected to jump past 40 with several as-yet unannounced new shows.

The independent animation studio has also animated countless commercials, promos, main title sequences, videogame cut scenes, pilots and feature film work, including collaborating on the video game depicted in the Spike Jonze feature Her, and has released a handful VR experiences using Google’s Tilt Brush toolkit. In the past decade, Titmouse has garnered six Daytime Emmy nominations -- winning two -- as well as one Primetime Emmy award, 16 Annie Awards and a slew of other international accolades.

The Los Angeles Animation Festival recently announced that Prynoski would be its guest of honor at the upcoming 2018 edition running November 30 through December 3. Titmouse is also participating in the upcoming Breaking the Glass Frame Symposium presented by Women in Animation, USC, UCLA and CalArts with the screening of the studio’s documentary, The Women of Titmouse Animation: The in-betweens of Education, Employment & Daily Life.

With more than 20 years of animation experience, Prynoski’s career began in New York with his work on MTV shows such as Beavis and Butt-head, Daria and his Emmy-nominated creation, MTV Downtown. In 2000, Prynoski and his wife Shannon moved to LA to launch Titmouse as a home for passionate artists making high-quality cartoons. Since then, he has helped bring to life a string of hits including the feature film Nerdland along with Big Mouth, Metalocalypse, Superjail!, China IL, Son of Zorn, the recently-launched Ballmastrz: 9009, and sleeper hit The Venture Bros., which is launching its seventh season tonight at midnight on Adult Swim.

“After moving to L.A., I accepted something like three different commercials to work on at the same time and then realized I couldn’t do them,” he says of his early years moonlighting outside of his job as an animator at Klasky Csupo. “I didn’t have enough time to do them because I had a day job! But the good thing about animating commercials is that there’s no set time for when the work gets done. You have to be there if a client calls, but they don’t really know how they actually get made.”

Klasky Csupo was at its height at the time, working on Rugrats and Jumanji movies, 10 TV series and “all these commercials,” according to Prynoski. “If I booked a job as a director, they were like, ‘You can just make it. We don’t have room in our facility anyway,’” he laughs. At the time, Prynoski’s wife Shannon was producing commercials at Will Vinton’s Los Angeles subdivision, Celluloid. “She was like, ‘How about I don’t take any more of those jobs, and I’ll just produce your freelance work?’” he recounts. “So we rented this little space, and would hire friends for all these jobs,” he says.

It wasn’t until Prynoski was hired to work on an animated sequence for the live-action feature Freddy Got Fingered that Titmouse was officially brought to life as an animation production studio.

“Twentieth Century Fox hired me to do a little animated sequence and a bunch of prop drawings for the movie, and they call me with the production services agreement and ask, ‘What’s the name of your production company?’” Prynoski recalls. “And I was like, ‘I don’t know, I’m just a dude.’ And they were like, ‘You don’t have a production company? Do you have production insurance?’” I’m all, ‘Yeah, I have a company, yeah, it’s called Titmouse. It has a bank account and everything.’ I didn’t even know what production insurance was. I think we just sent over our renter’s insurance paperwork.”

Alongside the aforementioned bucket cap, Prynoski wears many other hats as well, including executive producing, show running and directing. He is currently in pre-production on his latest feature film, Foxy Trotter, starring Natalie Portman. He also recently released a new short, Face Face, for Nickelodeon’s online Animated Shorts Program.

Titmouse had two projects screening in competition in the Commissioned Films category at this year’s Annecy Festival, The Mill’s music video for Jay Z’s “The Story of O.J.” and Exquisite Corpse, a 2017 short directed by Simón Wilches-Castro for Toonami featuring animation by 27 different artists and filmmakers including Sean Buckelew, Peter Millard and Brian Smee. In addition, Titmouse hosted an exhibit of 5-second shorts from the studio’s long-running 5 Second Day annual showcase of offbeat short-form cartoons animators at Titmouse Studios create in their spare time.

“This is the first year we’ve programmed an event like this,” Prynoski says. “We do a thing every year called Five Second Day where we shut down the studio and let our animators make five-second films. We picked five seconds because that seemed like a doable thing. We’ve been doing it now for 10 or 11 years, and over the years these little shorts have become a real thing where something like 20 people will team up on one film and plan it out, do pre-production, all of it. There’s a pretty wide range. Some of them are adult. Some of them are cute. Some of them are just weird,” he notes.

Titmouse had very nearly turned down The Mill when they called to find out if the studio would help produce a music video for “The Story of O.J.” “We got a cold call from them saying, ‘Hey do you guys want to do a music video on a very brutal schedule?’ The wouldn’t tell us anything about it but once they said it was for Jay-Z we were like, ‘Yeah, we’re definitely in.’ But it was a brutal six weeks,” he adds.

“There were no storyboards, no animatics,” Prynoski continues. “They did all the design and pre-production and compositing, and we mainly did character animation, and helped them figure it out. They were such good partners to work with. They very well could’ve just treated this like a work-for-hire thing without giving us any credit, but they shared credit with us on everything.”

And just like that, it’s time to go. The streets of Annecy seem kinder, with thinning crowds, the temperature a few degrees cooler. Blinking into the sun, we head off for next screening, and, later, a cold glass of rosé the color of pale straw.

VFX is the ‘Thing’ for Tom Turnbull on Tim Burton’s ‘Wednesday’
We Need to Chat
Choc Chip Animation Riffs on Pop Culture in ‘The Art of Murder’
F is for Flake: The (Not So) Great Animation Robbery?
Re-VIEW: ‘Avatar: The Way of Water’ – A Miraculous Vision
‘Kung Fu Panda: The Dragon Knight’ Celebrates a Special Lunar New Year
END_OF_DOCUMENT_TOKEN_TO_BE_REPLACED