In which AWN’s Chris Robinson scrutinizes the Oscar-nominated animated short film contenders at the 89th Academy Awards, and reveals his pick for the gold statuette. 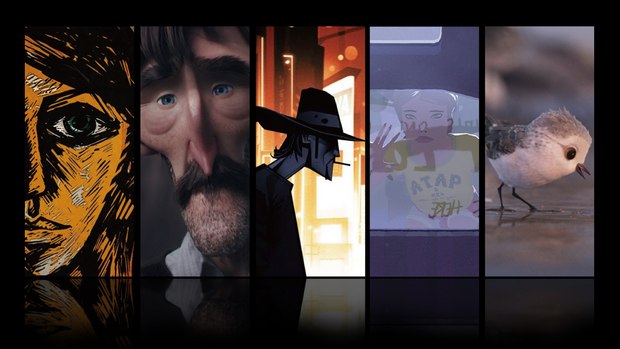 Let me just get this out of the way. Most of my amigos and not-quite-amigos know that I’m not exactly a big fan of the Oscars – or, more precisely, their nominees. I don’t know what motivates Academy members. I don’t know exactly how many films they are expected to view (though I do know it’s significantly fewer than the more than 2,000 submissions that Annecy, Ottawa or other major animation festivals receive). What I do know is that a majority of the nominees (especially since around 2000, when studios began making more short films) do not come close to reflecting the exceptional quality of work found in the larger animation landscape. That’s a shame because this is the one time of year when short animation receives rare and much-desired exposure to a wider audience. Out of these five nominees, only Blind Vaysha had a consistent and successful presence at international animation and film festivals.

In the recent CNN series, The History of Comedy, Sarah Silverman explains the rise of the “alternative” comedy scene in the 1990s: “These are people who didn’t have as much success in mainstream clubs because mainstream clubs had mainstream comedy. They didn’t necessarily go for ‘weird’, so they started their own rooms, with their own crowds.”

These are two very different worlds: one has a healthy budget or backing and is driven by a team of producers and creators; the other is often self-funded and produced and often created entirely by one person. The mainstream works are motivated by more than just a singular artistic expression; they are not just seeking a large audience, but an approving one. And they will tweak, cut and fine-tune their creation until they feel certain the audience will love it. If that works, there is a good chance of more work, more money, more exposure, more attention, more security. Obviously, independent animators seek an audience too – no animator would refuse having their work shown on network television or in a chain cinema. But not at any cost. They want that audience too, but on their own terms. They are less inclined to adjust their work merely to satisfy an audience. And they are afforded this freedom because they don’t have access to the mainstream channels. With, say, no shareholders to satisfy, the indie animator can take more risks and be more “weird.”

That’s not to say that these worlds don’t intersect. If you look behind a number of mainstream success stories (e.g.: Beavis and Butthead, Family Guy, SpongeBob SquarePants, South Park, Ren and Stimpy), you’ll see that the creators of those shows all got their starts making “weird” independent animation shorts for the festival and arthouse crowds.

The Oscars are a frequent but pothole ridden intersection between these two worlds. Mainstream works often dominate with 1-2 “bones” tossed over to the indie world (often in the form of the National Film Board of Canada – the NFB – which, despite making artist-driven work with a decidedly independent spirit, is a state-funded studio armed with producers, technicians and an army of administrators. Many “true” independent animators would love to have a fraction of the resources available to the NFB).

Even when the Oscars do acknowledge independent animation, it’s generally work that has a linear narrative and is somewhat audience accessible (e.g.: last year’s nominees, We Can’t Live without Cosmos and World of Tomorrow).

I “grew up” in that “weird” independent world. It’s a place I love. Like mainstream animation, It can be exhilarating and exhausting, ingenious and idiotic, but the real beauty of the independent scene is that it’s always surprising and unpredictable. I just can’t say that about mainstream animation or most of the films that Academy members vote for.

The Academy runs this show and can do as it wishes. That’s their right, but that doesn’t mean we shouldn’t contextualize this category in order to remind readers/audiences that it’s also not a true or just portrait of the world of animation.

All that is to say, that if you’re looking for fluffy, comfortable and glowing appraisals here, well…. You might want to just stop here or better still, check out the many fine upbeat articles covering this year’s Oscar race on AWN.com: 2017 Oscar Voting Guide: Animation & VFX Contenders Vying for Academy Awards.

OK… are they gone? You sure?

Let’s take a look at this year’s animation short nominees:

There was a time when an artist had to choose: am I gonna go the starving artist route and be creatively free, or do I just take the steady studio job contributing to someone else’s vision? Given the extraordinary changes in technology and the expansion of distribution and exhibition outlets, that’s not really the case these days. You can generally straddle the two worlds with relative ease and some studios are encouraging their own artists to explore their creative voices. That was the case with Borrowed Time.

The two directors work for Pixar. The studio has a co-op program that offers employees the opportunity to make a film on their own time using Pixar resources.

So it’s hard to knock anyone involved for their devotion and passion.

But, unfortunately, I will.

Borrowed Time looks and acts like a decent student film. The story is defective and predictable, the denouement with the watch is unconvincing. The design is uninspiring, but hey, the animation it pretty solid. Overall, this feels unfinished and flawed; a draft not a finished work.

First off, kudos to Robert Valley for getting his passion project made. That’s not an easy task, especially for a 35-minute independently created animation film.

Let’s be honest here, stories about anarchistic “dudes/bros” like Techno are everywhere. There’s nothing novel about them. Even from a visual and aural perspective, the fusion of Anime, Spaghetti Westerns and Film Noir along with a classic rock soundtrack feels a tad extreme and cliché.

What intrigues me is the narrator. Who is this guy? Why he is so obsessed with Techno? Yes, there’s a friendship here, but most people would grow tired of Techno’s endless missteps. I once wrote a book that purported to be about the life of a troubled and troubling animator, but it was really about a distressed narrator whose life was coming apart. When you approach Pear, Cider and Cigarettes from that perspective, it becomes a much more intriguing work. Beautifully conceived, designed and animated, Blind Vaysha also stands out for its original story (from Georgi Gospodinov). This modern fable suggests that we stop living our lives in the past and future and, instead, embrace the here and now. While I think Vaysha stands above the other nominees, I don’t think this is Ushev’s finest film. It’s hampered by non-stop narration that never lets you breathe and, you know, have a moment to contemplate. How are we ever going to find the moment if there’s all this talking going on? Still, a solid and timeless reminder about the importance of not getting lost in the then or there (apparently the film works even stronger in 3D, but I’ll leave that to you to decide). My only quarrel would be that if you close your door completely to the past and future, you won’t know how you got here or have any idea where you might want to go. This is an friendly art film; an easy to digest philosophical digestif that will leave a post-secondary educated liberal audience feeling enlightened before heading home to pay the babysitter, kiss the kids’ foreheads and fall asleep to House of Cards. This film from the people at Pixar is technically innovative. Yes, yes it is. It’s very cute and reminds of those old Disney nature films. Oh, I like that it’s more in the moment than all the other films (did you notice how they’re all fixated with the passing of time?). The birdie is just being…living and being and figuring shit out as she goes along. I’m not bothered by Piper at all. It’s short, sweet and comforting – like a cookie. But that’s also the problem. Like a cookie, it’s loaded with calories and gone after a few quick bites. What is it about the car as a metaphor for a life? In each of the last three years there have been animation shorts using the same idea: Somewhere Down the Line (2014), Mirrors (2015) and now Pearl. I get the attraction. A lot of pivotal life shit can happen in a car (birth, sex, road trips, karaoke carpool, accidents, death) and it’s a kind of interesting way to represent a life and it at least gets an audience to think a bit in-between Kleenex blows – but I still prefer Chris Hinton’s smart, non-car take on the subject, Flux. Pearl is a fascinating and unique technical exercise. I’m sure this looks pretty amazing when you’re wearing google goggles…but the story feels too easy, too sentimental.

What should win: Blind Vaysha. It at least nudges the audience a bit to think about the way they perceive and digest the world and time.

What will win: Hmm… it’s a toss-up between Piper and Pearl. I’d give the edge to Pearl because of its technical innovations and meatier (by comparison) storyline. Most Academy members are parents or grandparents, so they’ll be weeping like babies watching this.

What was really the best short animation of the year: it’s a toss-up between Igor Kovalyov’s husky portrait of a love triangle, Before Love, or Marta Pajek’s Impossible Figures and Stories II, a sensual, trancelike portrait of a woman’s crisis and re-birth.

Choc Chip Animation Riffs on Pop Culture in ‘The Art of Murder’
F is for Flake: The (Not So) Great Animation Robbery?
Re-VIEW: ‘Avatar: The Way of Water’ – A Miraculous Vision
‘Kung Fu Panda: The Dragon Knight’ Celebrates a Special Lunar New Year
END_OF_DOCUMENT_TOKEN_TO_BE_REPLACED