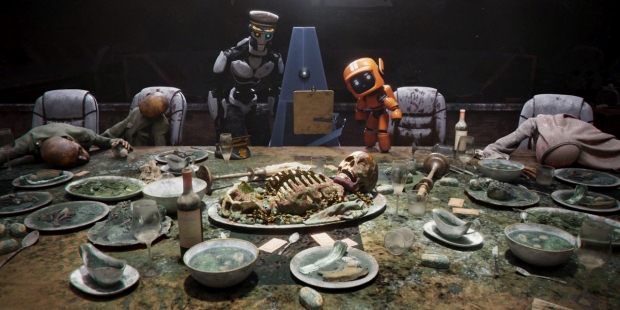 “Animators have long known there is more to the medium than talking animals or musical morality tales,” says Love, Death + Robots supervising director Jennifer Yuh Nelson, neatly encapsulating what the 11-time Emmy Award-winning animated anthology series is not. Rather, as the typically low-key promotional materials for the third season of the groundbreaking show inform us, it’s more like, “Tiny zombies! Robot Bears! Humanity’s existential doom!”

In Volume 3, which dropped May 20 on Netflix, Love, Death + Robots continues to provide a scintillating mix of deep thoughts, gleeful violence, and juvenile humor. The settings range from a post-apocalyptic Earth to a shark-hunting sailing vessel, from the Jovian moon Io to the mountains of Afghanistan. The new season also boasts the animation directorial debut of series executive producer David Fincher (The Social Network, Mindhunter, Mank), as well as episodes directed by executive producer Tim Miller (Deadpool, Terminator: Dark Fate), and Yuh Nelson (Kung Fu Panda 2 and 3).

And speaking of Miller and Yuh Nelson, they talked to us about the series and the new season – where the stories come from, how they’re matched with directors, how production is handled, and just what makes LDT+R the unique and ever-surprising achievement that it is.

AWN: So, what’s the secret behind Love, Death + Robots? How do you account for its success?

Tim Miller: I think it says a lot about my taste in supervising directors. That's what I think.

Jennifer Yuh Nelson: It's a labor of love for everybody working on it. None of us are doing this for any other reason than that we love working on the show. Everybody on the crews loves working on it.

TM: Hardcore animation fans all around. AWN: The press notes say that you're trying to be a little more artsy this year. Is that true?

TM: I wouldn't say that we consciously did it. I feel like the episodes are just as juvenile as the first season, or not. I think it's a mix. I'm really proud of the fact that you can have a short like Jennifer's Kill Team Kill, which is juvenile in the extreme and silly and fun, next to something that causes you to think about the situation in the world in a serious fashion. I think the fact that those two things can play back-to-back is the strength of the show.

AWN: How do you decide what's going to be in the anthology? Do you assume as you're assessing things that every idea is actually animatable?

JYN: It's funny, because we start with a big stack of stories that are based on what Tim's read over his whole lifetime. So, there's a bunch of stories to choose from, but it’s the ones that resonate and stick with us that tend to make the cut. We don't always think about whether it’s animatable, because if you put limitations on it that early, you're cutting yourself off at the knees. You have to find something that is groundbreaking, interesting, world-building, something you haven't seen before. And that's why it's a very fluid process.

TM: One of my favorite feelings in the world is when I'm reading something, and at some point – maybe it's two pages in, maybe it's 10 pages in – something clicks. And I go, “Oh shit this is interesting. Maybe this would be a really cool Love, Death + Robots short, or maybe it could be something else.” I've just read a novella that I sent to Jennifer, which could be really fucking cool.

TM: Yeah. So after I send them to Jennifer and she reads them, they go into this big bin. And sometimes you pull stuff out. Sometimes it's clear, this story needs to be made. Sometimes there's three stories that are all pretty cool and we need something in a particular genre. So, we try to figure out which one best fulfills that demographic. AWN: How do you match directors with episodes and how often do they provide their own stories?

JYN: It depends on the director. All the stories this season, except for Jibaro and Night of the Mini Dead, are based directly on a short story that Tim found. In the case of the directors, we sometimes say, “Here, read a few, which ones do you like?” And they'll come back and say, “This one, I have to make this one,” or “This is how I would approach it.” So, each director gives us a pitch of what they would do. In the case of Alberto’s original story Jibaro, it was a nonverbal story, so he came in with an outline. In the case of The Very Pulse of the Machine [about an exploratory expedition to the moon Io], the director, Emily Dean, came in with the idea of doing it in the style of [French artist and cartoonist] Moebius, with a hallucinatory feel.

AWN: How are the episodes produced? Do you centralize your pre- or post-production, or anything else?

JYN: They're all different. Some directors are part of a studio and the studio will handle a lot of the pre-production themselves. Some are independent directors, in which case we help them find a studio. Then the director may show up here – we've had directors literally get an office here at Blur, and we work closely with them. In the case of The Very Pulse of the Machine, Emily was here at Blur and she was having Zoom calls with a production studio in Japan. So, a lot of the pre-production is handled according to what the director needs. Most of the post is handled here at Blur by the team.

TM: We generally feel that if we give people a working script, that’s a base they can build on. We know enough about the narrative structure and character development and so on to know that the script works. So, when we give the directors that, we feel we've put them in a place where they can succeed. As Jennifer said, we also have a great team. Rob Cairns is our music director, Brad North handles sound, we handle all the final DI here, with Jennifer supervising all of that. So we're in charge of putting the pieces together at the end. And we're constantly reviewing things. SyncSketch is a pretty well-used app here in the studio.

JYN: We think it's very important for the director to find the look themselves, because that allows each short to be different. This isn't about us imposing a look on each short. It's very important that the director has a point of view on how they want that story to be told. They do check in with us a lot and we see dailies all the time. We see a lot of steps along the way, but we really work as a support staff to make sure that they are able to make the thing that they want to make. AWN: Both of you directed episodes this season. What’s it like when one of you is producing and supervising what the other one is doing?

TM: Jennifer's much better at that than I am. I do get frustrated. David [Fincher] is pretty hands off about letting people make their own mistakes, and he's good at collaborating. I think Jennifer and I are fairly open. She probably thinks some things that she doesn't say about my shorts, because she's so kind, but she's a really excellent mentor with the other directors. We have a pretty diverse group, where you have people with a little bit of experience and people with an abundance of experience. And she has to be very political, because directors are not known for their kindness and collaboration.

JYN: Tim demands a level of quality, and I think that's what is important. It shows in the show. Everything has this level of beauty. And it's because everybody knows that we're not just going to accept things, just because.

AWN: Did you learn anything on Volumes 1 and 2 that you put to good use in the new season?

TM: When we started Volume 1, everything was an experiment. We didn't know that it would work, or how it would work, or how well it would work. So there was a feeling of relief when it came together more or less as we hoped it would. In Volume 2, we didn't have that feeling that we were stepping off a cliff and you don't know if you've got a parachute or not, because we knew it would work. Jennifer was new to Volumes 2 and 3, but I had known her for a while – I knew that she was weird as fuck, but not difficult. But Victoria Howard was back to produce and Jerome Denjean was back to be the art director – we had a pretty stable group of folks. But then we go and make it harder by doing it during a pandemic. And then David decided to direct a short, which is always a bit of a sphincter-tightening experience, not because David's difficult, but because –

TM: It's fucking David Fincher. It's got to be great. And the whole team feels that. AWN: Like David Fincher, in addition to your work on LD+R, you’ve both directed features. What do you like about working on shorts that you don’t get from features?

TM: Doing a feature, carrying the weight of that for two years, is an amazing experience, but also exhausting. And the shorts are just joyous. You get in, you do this thing, you're working with other people who are excited about it, and nobody's doing it long enough to get bored or jaded or beaten down. So, it's like having that first relationship over and over and over and over again.

AWN: Last question. Do you think that Netflix appreciates these types of shorts and what they mean to our industry from a creative standpoint?

TM: I think the Emmys certainly help with that understanding, but we do get a lot of love from Netflix. I feel like they know what it means to the industry. The awards represent that, but I think they understand that they're doing something special here, and they've given us a lot of leeway to rise or fall on our own merit. And I'm glad to say that the industry has been very supportive of what we're doing.

Animated Characters: The Art of Babbitt – Part 1
Bruce Smith and Ralph Farquhar Talk ‘The Proud Family: Louder and Prouder’ Season 2
VFX is the ‘Thing’ for Tom Turnbull on Tim Burton’s ‘Wednesday’
We Need to Chat
Choc Chip Animation Riffs on Pop Culture in ‘The Art of Murder’
F is for Flake: The (Not So) Great Animation Robbery?
Re-VIEW: ‘Avatar: The Way of Water’ – A Miraculous Vision
‘Kung Fu Panda: The Dragon Knight’ Celebrates a Special Lunar New Year
END_OF_DOCUMENT_TOKEN_TO_BE_REPLACED