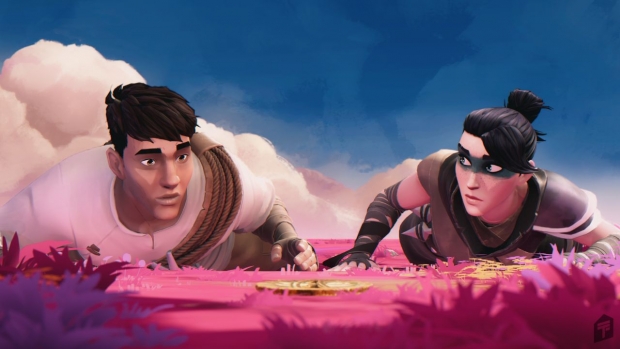 Producing final animation from within a visualization pipeline has become a significant part of the future for The Third Floor, a pioneering studio that has garnered acclaim producing top quality previs, postvis, pitchvis, techvis, and stuntvis (we’re probably leaving out a few of the “vis-es”) for a huge list of Hollywood blockbusters. One big step in that direction is TTF Anim, the company’s new, just announced animation group and suite of tools for final animation that brings to storytellers and studios the capability of creating 4K Dolby Vision-quality, stylized animated content completely within a game engine pipeline. “When The Third Floor started, we called visualization one thing, which was previs, but that was almost 18 years ago, and now the industry has evolved to a whole bunch of various services that can help support filmmakers, whether that’s animation or CG or live-action,” notes Joshua Wassung, Co-Founder and CCO, The Third Floor. “The common thread has been supporting the story.  All those are technical aspects of the various sides of visualization, which is rough layout, but also how that camera crane is moving and what is the safety distance?”

During the late 2000s, Wassung got the chance to previs an entire feature film.  He explains, “It started happening more and more that clients were using us for higher percentages of their films. We were sitting down, watching our previs and thinking, ‘Wow. This is an animated movie.’  Even though the animation was rough, we were putting personality and story points up on the screen.  For the past 10 years I’ve been thinking about how we could evolve previs to the point where it’s at a quality level that an audience could accept and enjoy.  We’re not trying to take traditional animation and make it cheaper, but to take visualization and making it higher quality.” The ability to iterate is the core mandate for The Third Floor.  “When I asked our clients what they were looking for when producing animation, the answer was more than three rounds of notes.  I wanted to evolve our visualization tool to allow a period of time where you could keep iterating and in the meantime the game engine is pushing the visual quality up.”

In 2019, The Third Floor became serious about integrating a game engine into the visualization pipeline.  “Unreal Engine is our primary game engine,” states Wassung.  “But we didn’t want to leave behind all our skilled workforce that uses Maya.  We started building connections to make it easier to bounce back and forth.” Compared to a traditional CG pipeline, producing animation with a game engine is inherently different.  “Everything is checked in and out at the same time and game level,” he continues. “However, shots are king in the narrative world.  This is how visual effects and animation are structured.  We had to build a way to track shots inside the game engine; that was something that we built when working on The Mandalorian.” In the new TTF system, files are accessed by the game engine on a per shot basis. “The tool we created is independent and can track shots across Maya and the game engine,” Wassung says. “We do use ShotGrid, Maya and Unreal Engine, and we’re connecting all of those files, which are tracked and in sync with one another as you go. That has enabled us to provide visualization for huge shows where we’re doing multiple episodes.” Additional tools were built to get rendering out of the engine. “Because the engine is so fast it allows us to iterate a lot quicker than the traditional linear pipeline, and to even have some automation,” Wassung describes. “For example, we can change color of an outfit and the system will spit out the sequence in a matter of minutes, which can then be sent to editorial.  We’re trying to give those tools and make them accessible to an edit session or to a supervisor.  It’s about bringing the speed of visualization into a pipeline that is producing high quality images.  If you’re going to change the animation, that is going to be work. I would argue that by seeing a better representation of the final sooner you can make a more informed decision and hopefully reduce the number of changes late in the game.”  Other services provided by The Third Floor, such as creating a VR experience that allows filmmakers to compose shots, will be leveraged.  Wassung notes, “Some filmmakers like to hand draw and say, ‘Make it like this.’  Others put on a headset and say, ‘I’m going to go out and explore that location.’  There are those who would be somewhere in-between. These are all options when you have it in game engine in our pipeline.  We know that everyone works differently and has unique preferences.”

The company’s major innovation with the new toolset has been connecting the game engine to the visualization work. “Real-time feedback in Maya does not produce a result that is suitable for a client,” says Wassung.  “Real-time feedback in Unreal Engine can produce a fidelity that is showable to an audience.  We are also merging the way that games our made with the way that animation is created.  Animation might have lookdev or effects development.  In gaming they would call that the vertical slice where a tiny portion of the game is taken and made as complete as possible.  We want that same approach, so as we’re doing visualization layout, we’re in parallel doing vertical slices.  But because it’s a game engine, once you check it in, that gets plugged in and is populated out so now the entire sequence is like that.  It is a slightly different hybrid of visual effects meets gaming. This changes how the departments are setup in that there is a lot more overlap. It’s less linear.  We can be starting on things where traditionally you would have to wait till later on.” As part of TTF Anim’s development, Wassung came up with an idea on how a proof-of-concept project could help solidify the new production pipeline. “I had this idea of two characters that are fighting,” he shares. “They have a rope and harpoon. We asked ourselves what was missing in our pipeline. This [missing] piece became our proof-of-concept. Thought it’s under two-minutes, we were building these tools specifically to scale the pipeline to produce hundreds if not thousands of shots.”

That two-minute short, called Skytribe, does not rely on photorealism. “We are impressed by so many animation studios that produce incredibly realistic stuff in a game engine,” Wassung says. “Considering our history of working on big adventure movies, we felt that kind of genre was well-suited with our skillset. But we also didn’t want to compete with the photorealism. So, we decided to go with a painterly stylized approach that is a bit more grown-up animation.”

In the short, 3D animation was combined with 2D effects. “Those are hand-drawn 2D effects that were placed in compositing and in the game engine,” notes Wassung. “We could take those 2D effects, put them on a card, place them in 3D space and in the engine, and play them back in real-time.  We also did the lighting in real-time, which meant that we could say, ‘The painted triangle on her cheek is not fitting so let’s move the lights around and adjust their intensity to make sure that it blooms in with the dynamic lighting.’  That was happening live.  We didn’t have to render that overnight.”

The results surpassed the company’s expectations. According to Wassung, the short, pieced together internally as well as with external recruits, was a huge validation for the team. “Streamers have increased the demand for animated content, which The Third Floor aims to take advantage of by producing features and television series.”

“I love aspects of anime and traditional animation,” he continues. “I enjoy the hybrid approach.  There are projects out there that people refer to as ‘American anime’ where they pull in some of those aesthetics and timing that were trailblazed in Japan but also aspects of traditional animation and performance style. Live-action projects can only be pushed so far. There’s always that question, ‘Could this be real in the real world?’ But now in animation, we can push it all of the way and say, ‘It’s stylized.  We can go crazy here.’

For The Third Floor and TTF Anim, this has opened up a whole world of fun that anime has pioneered over the last few decades. “I see ourselves working on an animated series and features,” Wassung says. “We have existing clients and new potential clients that we have been able to discuss it with and the reactions have been encouraging.  We are going to be starting up our first animation collaboration in the next few months.  Three years from now, I can see us having three concurrent animation projects that are large scale and offset. We would have a project in the early stages, one in the peak of production and another wrapping up.  I envision it being a mix of series and feature work.  I want to be producing stuff that we’re excited about that has a high level of adventure and a unique stylized look which will make people say, ‘I bet The Third Floor made that.’”

Taking an Old-School VFX Approach in ‘All Quiet on the Western Front’
‘Natural Habitat Shorts’: Like ‘Ranger Rick,’ But for Adults
Framestore Sets Sail on ‘1899’ with New Virtual Production Tools
Animated Characters: The Art of Babbitt – Part 1
Bruce Smith and Ralph Farquhar Talk ‘The Proud Family: Louder and Prouder’ Season 2
VFX is the ‘Thing’ for Tom Turnbull on Tim Burton’s ‘Wednesday’
We Need to Chat
F is for Flake: The (Not So) Great Animation Robbery?
END_OF_DOCUMENT_TOKEN_TO_BE_REPLACED