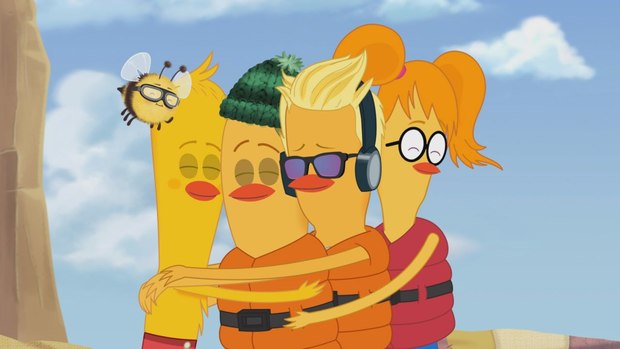 Launching today on Netflix is an exciting new animated kids’ series from DreamWorks Animation, Archibald’s Next Big Thing, starring and executive produced by veteran actor Tony Hale (VEEP, Arrested Development and Forky from Toy Story 4). The 13-episode series, based on Hale and Tony Biaggne’s 2014 children’s book of the same name, stars Archibald, a cheerful, curious  and energetic chicken who embraces life to the fullest while careening from one wild adventure to another. Hale stars as the voice of Archibald; the main cast also includes Adam Pally, Jordan Fisher, Chelsea Kane, Kari Wahlgren and Rosamund Pike, with guest voices by Christine Baranski, “Weird Al” Yankovic, RuPaul, Casey Wilson, Rob Riggle, and Julia Louis-Dreyfus, among others.

For co-executive producer and showrunner Eric Fogel, Archibald represents another colorful chapter in a storied career that has taken him from his 1991 short, The Adventures of Mutilator, Hero of the Wasteland, to the 1994 animated MTV series, The Head, to more mainstream shows like Daria and Glen Martin DDS, and of course, to his 1998-2007 stint as the creator, writer, director and executive producer (in various combinations) of one TV animation’s most controversial, culturally groundbreaking, no holds barred and chronically inappropriate adult animated comedies, the stop-motion dynamo known as Celebrity Deathmatch. The terms “legendary” and “epic” are often overused by writers waxing poetic about the properties they hold near and dear; Celebrity Deathmatch, hands down, was both legendary and epic and remains, in this writer’s eyes, one of the most groundbreaking animated shows ever made. “Deathbowl ‘98,” featuring a claymation Howard Stern melting Kathy Lee Gifford with his flatulence, aired in direct competition with the 1998 Superbowl halftime show; it was an audacious and defiant TV programming act of sheer brilliance, and remains one of my most memorable and enjoyable TV viewing experiences.

--- Only on AWN: Read Eric Fogel's 14-part series about his days on Celebrity Deathmatch! ---

“I've been doing this a long time,” Fogel muses. “I was 25 when I sold my first series, The Head, to MTV. That was sort of ground zero for me learning about TV series animation. I'm a little older than 25 now… and as far as Celebrity Deathmatch, strangely there is a little bit of overlap, if that sounds plausible, with Archibald. It's a physical show… there's some cartoony physicality that is really fun. Archibald is a special chicken, and this is a special show.”

Archibald’s Next Big Thing is centered around Archibald Strutter, an enthusiastic young chicken who fully lives in the moment and often encounters unexpected adventures at every turn. Archibald may not be the best at everything, or the smartest, but he’s never afraid to learn, to say “Yes” and try something new… which could mean breakdancing, exploring a mysterious cave, tasting an odd-looking fruit or befriending a giant whale. With each twist and turn, this gangly, happy chicken shows everyone around him how important it is to be present, get out of your comfort zone, and celebrate life’s little moments. There’s nothing chicken, or little, about his character.

“We really try to push to show you things that you've never seen before,” Fogel notes. “So, in the pilot, which set the foundation for the show in a lot of ways. Archibald loses his family and ends up on an underwater adventure that’s basically a monster truck rally. But, instead of trucks, there are whales crashing into sunken sea vessels. It's an underwater arena… our version of a monster truck rally just turned on its head. This show is about pushing that unexpected weirdness in fun, surprising ways.” Fogel came onto Archibald early in the show’s development. “I was brought in pretty early on,” he shares. “The show was in development at DreamWorks and they needed someone to come in and direct what was, at the time, the pilot. There was a script written by two young writers, Jake [Jacob] Moffat and Drew Champion, based on the children's book that Tony had written. I thought the book was really fun and sweet. It felt sort of young to me, but the pilot script Jake and Drew wrote felt a little bit older, a little more sophisticated in the comedy, and I really connected with it. So when I came on board, I was able to really dive into that pilot script and make something I thought was going to be unique, something that would really kind of pop.”

And “pop” it did; early in the pilot development effort, armed with only a few boarded sequences and of course, Tony Hale, Fogel and team took the show to Netflix, who loved it. “We were only a few weeks into boarding the pilot and DreamWorks was feeling really, really bullish about the show,” he reveals. “So, we completed two sequences that we felt really captured the voice, tone and aesthetic of the show, and took that into Netflix. And on the backs of Tony Hale and the material, they greenlit the series.”

Initially co-executive producer on the show, Fogel’s role soon expanded; he became showrunner halfway through the season, taking on an expanded set of duties across the production. “My role expanded early on to really overseeing all aspects of the production, from script through post,” he notes. “That’s unusual, at least here, because a lot of times they'll sort of split duties between a writing EP and a directing EP, and I just sort of embraced all of that and felt I could be effective in that larger role. It's seems to be working… they haven't fired me yet.” According to Fogel, the strength of the show, and ultimately, what drew him to the project, was the main character, Archibald. “One of the most fun aspects of being part of the show so early on was that we could really build out this world and do something really original with Archibald,” he explains. “The book planted a seed of who this character was, but really only scratched the surface. What inspired us was this character who went into any situation with wide-eyed optimism. Our biggest takeaway from the book was that we have this hero character, who isn’t always heroic in the classic sense, but is wide open to new experiences. That sort of looseness allowed us to really find the spine for the show and for these stories we wanted to tell. It really opened up Archibald’s world for us. We realized you could put that character into almost any scenario and build a story around it; there was no limit at that point once we figured out the bones of how these stories would come together.”

From a design and animation standpoint, Fogel’s diverse TV animation background, from stop-motion to various 2D styles, helped him and his team craft an appealing aesthetic that captures and builds upon the book’s character and environment designs. From employing a cinematic approach inspired by Wes Anderson, to choosing a rich color palette and dynamic lighting, Fogel pushed to create an expressive, dynamic 2D show with a hand-drawn feel. “There was a textural quality that Archibald had in the book, as well as the world he inhabited, that we really loved,” he describes. “Everything has a painterly quality to it. That was really important to us in terms of trying to bring a storybook to life. We really committed to that early on. You'll see that in the crazy, thick signature sweater that Archibald wears, which has quite a bit of detail in it, all the way through to the texture of the environments, the woodgrain in the furniture and house that he lives in and the expanded world beyond that. With Archibald, we've created something really beautiful that’s hard to do in TV animation especially. We captured something special in the look of the show, a warmth and charm that really evokes a storybook quality.”

“This is a Harmony show,” he continues. “We landed on Harmony  [Toon Boom’s signature animation program] because it could handle the textures we were applying to the characters. But, my approach to the show was basically to not think of it as a Harmony show, but to think of it as a hand-drawn 2D show. I feel like we've been really successful in achieving that goal. From the storyboarding level, I told the artists, ‘Just think of it like a hand-drawn show.’ So, we really pushed the poses, going really broad with the acting, which in turn, forced the animators to have to draw. Typically, with comedy-type animation, it’s a little more flat, a single-point perspective. I felt with this show, because there was such an adventure aspect to it, you really could get a little more creative with the angles, shot choices and how you were going to capture the animation. The result is something quite entertaining and appealing, because when you watch it, it's got much more of a dynamic and a cinematic quality than a typical Harmony show.” To Fogel, one of the main challenges on the show has been the desire to create something that catches the attention of kids and their families constantly faced with a growing number of animated programming options vying for their attention. “I never want to be involved in a project that I'm not truly in love with and something that I wouldn't want to want to watch as a viewer,” he says. “There's so much content out there as you're flipping through the channels that you have to give the viewer something enjoyable to watch. You only have a split second to capture their attention and you want to give them something they're going to stay on for a while once they land on it.”

Keeping viewer attention also depends upon compelling storytelling. For a kids’ show, that’s particularly challenging given younger viewers’ typically short attention span. “The stories we tell on the show, on the surface, seem sort of simple, but they're fairly complicated,” Fogel states. “Each story is really a puzzle; there’s a certain amount of cleverness that goes into crafting them, and maintaining that level of cleverness is challenging. We had to really push ourselves not to be repetitive so we could retain the series’ freshness. It takes work… a lot of brain power. But, it's super fun. Some of the most fun I have is when we're breaking down these stories, finding new adventures and ways to spin our tales. But, it can be challenging.”

“Another challenging part of entertaining our audience is keeping the show surprising,” he adds. “Part of the show’s DNA is you start one place and end up in a place that you never expected. For example, Archibald's having trouble with his TV, so he goes to what he thinks is a TV studio to sort it out. When he has to go to the bathroom really badly, he accidentally gets inside a rocket ship that he mistakes for a bathroom and ends up on an outer space adventure. He takes a right turn and ends up heading in a direction you never expected at the start of the episode.”

Taking an Old-School VFX Approach in ‘All Quiet on the Western Front’
‘Natural Habitat Shorts’: Like ‘Ranger Rick,’ But for Adults
Framestore Sets Sail on ‘1899’ with New Virtual Production Tools
Animated Characters: The Art of Babbitt – Part 1
Bruce Smith and Ralph Farquhar Talk ‘The Proud Family: Louder and Prouder’ Season 2
VFX is the ‘Thing’ for Tom Turnbull on Tim Burton’s ‘Wednesday’
We Need to Chat
F is for Flake: The (Not So) Great Animation Robbery?
END_OF_DOCUMENT_TOKEN_TO_BE_REPLACED