NFB-produced short employing a bold, graphic style is one of 10 candidates shortlisted for a possible nomination for Best Animated Short at the 89th Academy Awards. 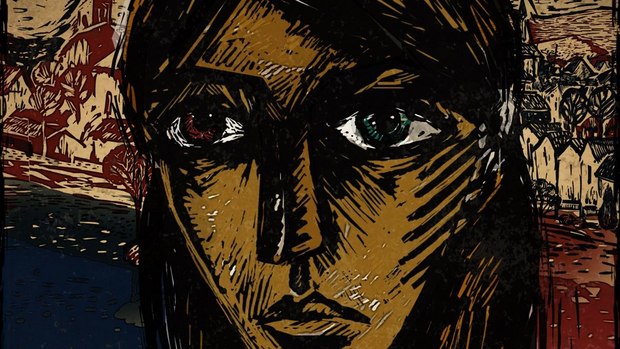 Theodore Ushev’s Blind Vaysha (Vaysha l'aveugle), the 2016 animated short produced by Marc Bertrand for the National Film Board of Canada, with the participation of ARTE France, is a metaphor for the human struggle to live in the present moment.

Based on a story by Bulgarian poet, playwright and author Georgi Gospodinov, the 3D animated film -- Ushev’s 13th short film project -- employs a bold, graphic style to tell the tale of a girl who sees past out of her left eye and the future from her right -- and so is unable to live in the present. Montreal actress Caroline Dhavernas performed the narration for the film, in both its French and English-language versions. In his fourth collaboration with the filmmaker, Bulgarian musician and composer Kottarashky provided the music.

The project began in France, at Fontevraud Abbey, where Ushev was inspired by the medieval drawings and designs he saw there. He did fifty paintings during his month-long stay in Maine-et-Loire, drawing inspiration from the Abbey's architecture and with the design of film's central character influenced by paintings of Eleanor of Aquitaine. At the time, Ushev was already working with a text by Gospodinov for an upcoming film when he and a group of friends had the idea of making “an omnibus out of some of his short stories.” While reading them, Ushev was captivated by the story of Blind Vaysha, which immediately struck him as being suited to his style of filmmaking.

The eight-minute short film is animated on a Cintiq tablet in a linocut-style, a medium Ushev had worked with since the age of 12. He sought to reproduce the visual artifacts of the linocut technique by never using the “Undo” command on his computer while drawing: “Because with linocut, once your hand carves it, it is gone,” he comments. “You cannot put the black back. This creates a natural feeling of the unpredictable, of mistakes and the holy imperfection of the image -- which is the basis of every creation.” As with two of Ushev's previous films, Drux Flux and Gloria Victoria, Blind Vaysha was produced as a stereoscopic 3D film.

Included in the list of “Canada's Top Ten” shorts of 2016, Blind Vaysha had its world premiere at the 2016 Berlinale, and received both the Jury Award and Junior Jury Award at the 2016 Annecy International Animated Film Festival. In September 2016, the film -- which is due to be adapted into a virtual reality experience by the NFB -- received the Cartoon Network Award for Best Narrative Short Animation and the Canadian Film Institute Award for Best Canadian Animation at the Ottawa International Animation Festival. In November 2016, the Academy of Motion Picture Arts and Sciences announced that the film was one of 10 candidates to be shortlisted for a possible nomination for Best Animated Short at the 89th Academy Awards.

Ushev teamed with Germany-based animator and Filmakademie instructor Andreas Hykade to create the signal film for this year’s 20th anniversary edition of OIAF, delivering a crisp and catchy sing-along anthem that captures the bold spirit of independent animation. “We’ll make it better next time,” Ushev intones at the end of the short, and in many ways that’s his motto: “Next time is always better,” he insists during a brief chat held in Ottawa. “It’s the question of the missing opportunity. We always say the next one -- the next film, the next painting, the next book, whatever it is -- will be better.”

Comparing the filmmaking process to jogging, which he performs daily, Ushev says he is completely immersed in a project once he begins, and that when finished he is filled with a physical sense of relaxation. ‘When you jog, you feel when you are done,” he explains. “You don’t say, ‘today I am going five kilometers, or seven kilometers.’ You just go as long as you need to until you are done.”

Ushev also compares filmmaking with a psychological cleanse. “There are people who tell me my films are depressing, but I make depressing films so I’m not depressed myself,” he says. “I’m not a sad person. Well, sometimes I’m sad, but I take that and I make a film and it’s like cleaning for me. Art is the most powerful therapy.”

In Blind Vaysha, the present is depicted visually as a thin white line that separates from the past from the future. The sounds that are heard, meanwhile, all reflect the present world as well. According to Ushev, the inability to live in the present is one of the biggest problems humans face: “We let nostalgia for the past and fear of the future spoil our present,” he insists. “We sacrifice our entire lives for an idea.”

See below for the trailer for Blind Vaysha along with a clip from the film and a collection of stills: