Theodore Ushev: ‘The Physics of Sorrow,’ My Animated Time Capsule

In the first fully animated film using the encaustic, hot-wax painting technique, a rootless, melancholy man sifts through memories while struggling to locate home, family and self. 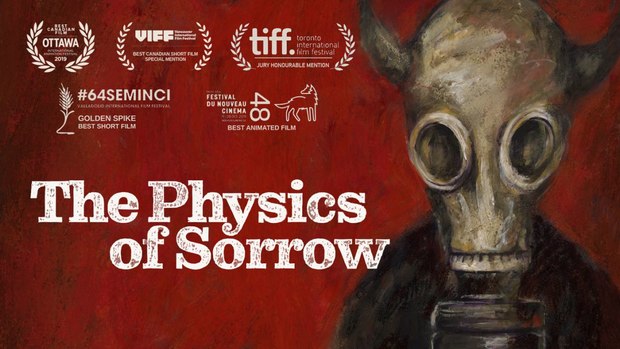 In some ways, The Physics of Sorrow (inspired by Georgi Gospodinov’s novel of the same name) is a culmination of Theodore Ushev’s work to date: an epic, pained and deeply personal musing on the aches of a generation of people in exile, not specifically from a homeland (though that is true in Ushev’s case) but from themselves and each other. Skirting through a maze of fleeting memories and emotions, The Physics of Sorrow is a potent and timely portrait of a dislocated generation struggling to find home as they shift through ever-changing personal and geographic landscapes.

Ushev’s work (e.g. Drux Flux, Gloria Victoria and the Oscar-nominated Blind Vaysha) has frequently examined the relationship of the individual within larger, often suffocating political and social systems. The Physics of Sorrow is arguably the first film where Ushev has really put himself in the story. And it makes sense that, like the protagonist of Sorrow, Ushev grew up in a communist country before leaving for Canada and a new life as a father and filmmaker. The first fully animated film using the encaustic painting technique (also known as hot-wax painting), The Physics of Sorrow tracks the outlines of an unknown man’s life as he sifts through memories of circuses, bubble-gum wrappers, first crushes and army service from his youth in communist Bulgaria, through his increasingly rootless and melancholic adulthood in Canada as he struggles to locate home, family and self. In the piece that follows, Ushev discusses the history, inspiration and challenges of using the encaustic technique to create The Physics of Sorrow.

The Physics of Sorrow (Clip #1) from NFB/marketing on Vimeo. Once upon a time, there were the Egyptians. Some of them were put in pyramids, in giant tombs. When wealthy Egyptians died (everyone dies one day or another, eventually), they were embalmed and mummified. The god of death was Anubis. Once embalmed, their bodies were put in a sarcophagus. They would put everyday objects alongside the buried person with an encaustic portrait on top of it. This technique, which dates back to antiquity, involves using heated beeswax and then adding coloured pigments. The liquid or paste is then applied to a surface (wood, canvas, etc.). Encaustic was the first technique used to create realistic portraits of the dead on Egyptian sarcophagi, thus allowing the memory of the buried person to be preserved over centuries. When those Egyptian tombs were discovered at the beginning of the last century, the archeologists were stunned at how well-preserved the portraits were. There were no faded colours, and minimal destruction of the materials. These were essentially the first time capsules. Why did I use this difficult, risky technique that had never been used for animation?

I was inspired by the Egyptians the same way the “father” of the concept of modern time capsules, Oglethorpe University president Dr. Thornwell Jacobs, was. He drew inspiration from the discoveries of the Egyptian tombs. And how well-preserved those tombs were, after 18 centuries! In 1936, detailed plans began to build an extraordinary time capsule—one designed to store records for over 6,000 years, done on what could perhaps be described as an epic scale never before conceived. In 1940, “The Crypt of Civilization” was sealed. Jacobs was convinced that his generation could be the first to perform what he later called “our archaeological duty.” This was an obligation to provide for future historians a thorough and accurate record, scientifically selected and preserved, of life in the 20th century.

So, I created my animated time capsule—one that would provide the next generation, in a form of animated film, a picture, a portrait of our generation. Conceptually, encaustic painting was an obvious choice—except for the fact that no one had ever done animation with it, so I had to invent the technique. The first scenes were an absolute disaster. Then suddenly it came: It became “my” technique when I used a recipe that my father had given me for mixing the wax with the pigment. He would then paint the ingredients onto paper and let it dry out. So, I followed that, but I made the mixture so hot that it liquefied. Then I could change the movement and colours. I was then able to paint 50 frames a day, with great detail on every image. It was very physically demanding. You have to paint very fast, because the hot wax dries out quite quickly.

The Physics of Sorrow: The Technique (Making-of) from NFB/marketing on Vimeo.

Everything can be found in this time-capsule labyrinth: objects, stories, melodies, love, death and sadness. The dream of every Minotaur in this world is to get out of the labyrinth, out of the cave, to see the sun, to be a happy person. This is a film about the quest for happiness of all the Minotaurs in the world. The Physics of Sorrow (Clip #2) from NFB/marketing on Vimeo.

Theodore Ushev is an independent animator, originally from Bulgaria, and the creator of more than 10 acclaimed films at the National Filmboard of Canada (NFB) including Blind Vaysha, nominated at the 89th Academy Awards.