Based on Percy Shelley’s poem ‘The Dirge,’ animated short employs paper cut-outs to explore themes of death and loss through a futuristic fantasy lens. 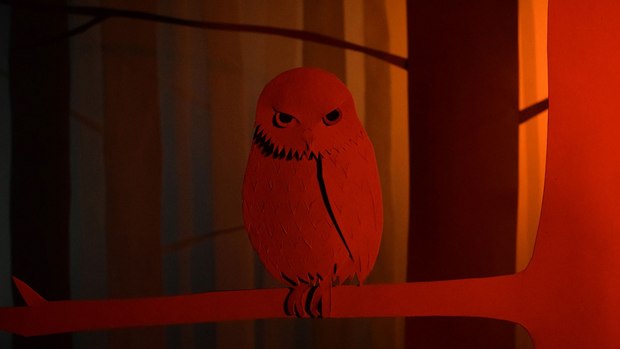 Ginevra is an animated short film by award-winning filmmaker Tess Martin. The short explores the themes of death and loss through a futuristic fantasy lens, using as a basis an unfinished poem by Percy Shelley published posthumously in 1824.

Based on Percy Shelley’s poem “The Dirge,” Ginevra depicts the aftermath of the murder of a young woman. As her distraught mother looks on, she learns that life after death involves a transition she never could have imagined. The short film is part of the Campfire Poetry Project, a series of short films based on late 19th and early 20th century poems produced by Max Rothman for Monticello Park Productions.

“Something about the story and music brought to mind cold, hard­edged paper cut­outs, so I knew I would use this technique in some way,” Martin says of her approach to the project. “Stylistically I was inspired by Renaissance-era fashion and architecture -- as that was the era of the original legend -- as well as by the futuristic lighting and shapes of Blade Runner, as the music implemented very sci­fi like instruments and tones.”

Aesthetically, the film draws inspiration from bas-relief paper sculptures, the Renaissance time period of the legend referenced by the poem, and the strong lighting of films like Blade Runner. The film was animated with stiff paper cut-outs one frame at a time on a multi-plane animation stand over the course of six weeks in Martin’s studio in Rotterdam, and finished in January 2017.

“I had worked in paper cut­outs before, but never with top lighting. I built a larger multi­plane animation stand and developed a paper technique where the cut­outs would be a little bowed, so when lit they could cast shadows. I then used lots of clip lamps, combined with gels and colored papers to create the lighting. All the elements you see on screen are made with cream paper, and all the color is a result of the lighting,” Martin recounts.

“After the storyboard was settled, I created one scene at a time -- making the cut­outs, setting up lighting, and shooting immediately before filing the cut­outs away and starting another scene. This made it easy to keep track of how big the cut­outs had to be for each scene, and how the lighting needed to be. Because the film takes place from early dawn through to morning, the lighting had to be specific and change gradually from scene to scene.”