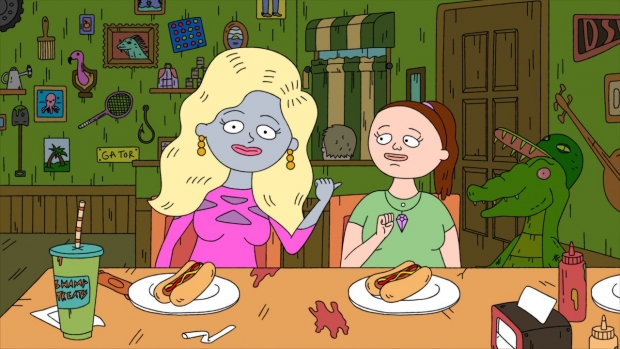 On September 5, as the Rick and Morty Season 5 finale came to a close, a surprise episode of a new strange, wild, and fantastically grotesque adult animation about an undead mother and her teenage daughter suddenly sprung to live on viewers’ screens.

Two weeks after its initial reveal, Teenage Euthanasia made its official Adult Swim debut on Sunday, September 19, with corpses, crotch beetles and a surprisingly caring family in tow. Now, Alyson Levy and Alissa Nutting’s sci-fi comedy serves as proof that animation can be “anything you could ever imagine, except boring,” according to Aaron Augenblick, founder and head of Augenblick Studios, responsible for the show’s animation.

“The only rule is you have to be interesting,” says Augenblick, whose studio, over the last two decades, has made a name for itself in adult animation, from Shorties Watchin' Shorties and Superjail! to Ugly Americans and The Adventures of Drunky. “Alyson Levy and I have known each other for over a decade because we did Wonder Showzen together. Now we're very close friends and I feel like we have a similar sensibility in animation. So, when Alyson came to us with Teenage Euthanasia, I got really excited. Honestly, I probably would have done it no matter what it was but, luckily, this is a really awesome project.”

Based on the art stylings of comic creator and series art director Abby Jame, and co-creator Nutting’s own depictions of her home state of Florida, all wrapped up in the unapologetic storytelling stylings of Levy, Teenage Euthanasia focuses on the life of teen girl “Euthanasia,” nicknamed Annie, who lives with her Grandma Baba and Uncle Pete and helps run the family funeral home, Tender Endings. But Annie’s life is shaken up when her estranged mother Trophy, who abandoned Annie after giving birth, returns home as a corpse and is brought back to life with her daughter’s tears Baba’s embalming fluid, and a fateful lightening strike. The 2D animated show is set in an apocalyptic, near-future Florida town with an unconventional and unfiltered family. In short, it’s the exact kind of series Augenblick Studios gravitates toward.

“It’s like we have a cake filled with these interesting characters in a really interesting world, going through these experiences, and the icing is all the wacky stuff with horror and zombies and sci-fi,” says Augenblick. “You're going to watch it and laugh your ass off. But hopefully, you're going to stay for the characters.”

When he founded the animation studio in 1999, Augenblick’s mission was to prove that animation wasn’t just for kids, and that the medium was prime for all ages and all genres, from comedy to drama and even horror.

“When we got our start in the early 2000s, there was still a lot of discussion of, ‘Is animation for adults or kids?’ and I feel, at this point in time, that's just obliterated,” notes Augenblick. “People who are Millennials or Gen Zers have never known a life where there wasn't an Adult Swim, or where there wasn’t primetime animation for adults. And it’s worked out that our studio’s existence has paralleled the growing popularity of adult animation. So now we’ve finally converged with pop culture.”

Wendt adds, “And there are a lot of really strong voices in animation that are helping push this idea. A few years back, Brad Bird made a statement that was something along the lines of ‘Animation is not a genre. It’s just a medium.’ Animation isn't just for comedy; it can be anything. Just like film, by itself, isn’t a genre.” And not only does Teenage Euthanasia fit into multiple genres - drama, comedy and, of course, its own version of horror - it also serves as a pillar for another one of Augenblick’s beliefs - that 2D animation is far from dead, and this is just the beginning.

“Jame has this really cool, very modern, but yet very retro style with influence from Klasky-Csupo and underground comics,” says Augenblick of the show’s animation director. “And the project we did before this for Netflix, Headspace Guide to Meditation, which was something where we took most of our inspiration from fine art, surrealism and very painterly styles where we were doing evocative abstract imagery. We have a lot of fun experimenting in the 2D space.”

He continues, “Whether it's fine arts painting, drawing, cut-out puppets, I just love two-dimensional art. It’s my favorite thing. And I've never found it limiting in any way.”

And according to Wendt, adult animation is the land without limits, either in design or storytelling.

“I got into animation because I was obsessed with Disney movies and I’d always planned to go over to California to work on kid shows,” recalls Wendt. “But then I interned at Augenblick in 2009 and it was really exciting how much creative freedom was afforded to us making stuff for adults.” While adult animation’s wide range of creative permissiveness often comes with uncomfortable, darkly comedic imagery, those permissions also lend themselves to creators diving into topics they might never approach outside of animation, like a once neglectful mother getting a second chance at having a relationship with her child.

“Alyson and Alissa are very deep thinkers, and they created this show where all the characters have a lot of emotional depth, which is what creates the core of the show,” says Augenblick. “There was this whole emotional rainbow that we got to play with for these characters. And we can get away with all these silly, sometimes dark jokes because the core of the show is this really interesting relationship between a mother and daughter. And that's essentially what the show is about, a broken relationship between a mother and daughter that they're trying to fix, and they both don't really know how to do it. That's what every episode really hinges on. I think that level of emotional depth is not something you get to see in animation that much.”

To Augenblick, animation not only opens a door to approach these kinds of topics, but it actually adds a level of depth and reflection that viewers wouldn’t get from a live-action series.

“When you watch South Park, and you hear these paper cut-outs of children cursing and murdering each other, it has this emotional power that you would not get if they were live-action humans,” explains Augenblick. “A South Park live-action would be too disturbing. But in an animation, it takes you on a journey that you just accept because it’s all made from scratch. You can have a relationship with animation that is on a deeper level than you can have with anything else taken from reality.” Wendt and Augenblick have had their own personal connection with the show as well through the series’ comedic take on circumstances that, while fiction, also feel very real.

“Honestly, it's sort of comforting to be able to joke about stuff in this show, because it’s not this impossible future that we’re animating,” says Wendt. “Even though it’s apocalyptic, it sort of feels like the way the wind is blowing for us right now. Like how technological progress is all in the aid of tourism, rather than helping people's lives actually get better. And it’s fun to be able to make jokes about that because it's something that we're all experiencing together as a society, and it can feel so grim.”

Augenblick adds, “It’s kind of crazy, because we did the pilot at the end of 2019, pre-pandemic, and one of the major components of the show is that Annie is a high school kid, and every teacher is a hologram, and a lot of civil servants are virtual holograms. Who would have known literally months later that this would be happening in real life”?

From being a place of comedic refuge to a haven for creative experimentation, gritty, 2D adult animation continues to hold its ground in the face of CGI and growing technological advances. And it's a medium that Augenblick and Wendt believe has an even brighter future than in years past.

“Animation started out as this exclusive club for a long time,” says Wendt. “And it's exciting that more people have access to the tools that they need to make animation because it'll create new types of storytelling. It’s exciting to think about these weird animations finding large audiences and audiences finding they want more weird stories.”