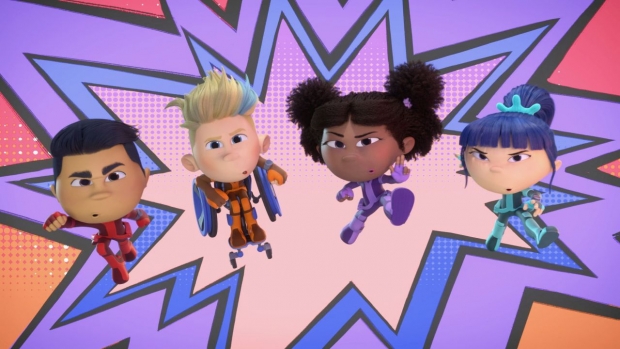 In a world increasingly mediated by “likes” and “views,” what could be more refreshing than a show about kids who do good deeds and don’t want any credit for it? That’s the concept behind DreamWorks Animation’s new preschool series Team Zenko Go, produced with Mainframe Studios, which premiered March 15 on Netflix.

Niah, Ari, Ellie and Jax are members of a secret squad of do-gooders who perform anonymous acts of kindness for the unknowing residents of Harmony Harbor. Using a special set of skills taught them by their mentor, Auntie Yuki, the four young friends, and their stealthy activities, have succeeded in making their town the happiest in the world. As Auntie Yuki says, “When we help people without them knowing, they start to think that the world is just a nicer place.”

Helmed by showrunner Jack Thomas (DreamWorks Dragons, Dragons: Rescue Riders), Team Zenko Go stars Nakai Takawira, Hartley Bernier, Dominic Mariche, and Penelope Good as the four unsung heroes, as well as D'arcy Han as Auntie Yuki and Tabitha St. Germain as Ponzu. Notably, among the highly diverse and inclusive cast, Hartley Bernier, who plays the wheelchair-using Ari, lives with a chronic illness and is familiar with the experience of having limited mobility. As Thomas has explained previously, he not only is a proponent of inclusivity, but he believes that an actor who shares some experiences with a character has an advantage in playing the part. While Thomas is clearly no stranger to writing and producing shows geared to a younger demographic, he admitted that, after spending so much time embedded in a long-ago era populated by large flying creatures, moving into the present was a bit of a jolt.

“The really hard part about adjusting from the How to Train Your Dragon universe to the Team Zenko Go world,” he shares, “was shifting gears from a fantasy set a thousand-plus years ago, where people fly around on dragons and almost anything can happen, to a very grounded, modern world with comic books and food trucks, and where the main characters are trying to secretly do good deeds like finding lost pets. And none of those pets breathe fire.”

At the center of Team Zenko Go is the virtue of altruism – an increasingly endangered ideal in an increasingly polarized and self-promotional world – and the concept that doing a good deed can be its own reward.

“You don't have to seek fame or fortune or ‘likes’ for your actions,” Thomas says. “The idea is that these kids, by doing the good deeds, create an environment where everyone is treating everyone better and paying it forward. That's why Harmony Harbor is this bright, happy-looking place.” Which it most definitely is. The design of the city and its inhabitants, especially the bright and cheery color scheme, instills Team Zenko Go with a glow of well-being. At the same time, as Thomas points out, the show is an action-comedy, so it was important not to overdo the “cute” factor.

“The one thing we really tried to avoid was overusing pastels, so we didn’t skew the show to being too ‘cutesy,’” he says. “I think pastels play super-young and can be boring. And I think the greatest sin in a preschool show is to be visually boring, because then, no matter what good intent you have or positive message you're trying to convey, it's never going to hit home because the kids will have turned it off.”

As for the nuts and bolts of achieving their production goals, Supervising Producer Tanya Green says that they used a variety of tools in the creation of Team Zenko Go, including, not surprisingly, a couple that were necessitated by the ubiquity of a novel coronavirus.

“We used Photoshop, Flix and Avid for our storyboards and animatics,” Green recounts. “For physical production, we used Maya, ZBrush, XGen, RedShift and Katana. ShotGrid was used to track all our materials and to keep on top of production. As the show ended up being a fully remote production, we had the challenge of ensuring communication was smooth so that we could review materials live. We used Zoom a lot for meetings and reviews. We also did remote live edits so that we could review materials together and discuss notes and make changes in those reviews.” “Animatics and lighting passes were sent to me, and I watched them in DaVinci Resolve,” Thomas adds. “When we did final mixes, we used an awesome platform from Sohonet called ClearView Flex that allowed many people to watch the mix with zero lag. I really missed the synergy you have when you're in the same building with your crew and they feel free to come over and ask questions and you can check in with them from time to time to see how things are going. It was a very different experience doing the entire show remotely, but all credit to the cast and crew for stepping up.”

“Everyone adapted to remote work so quickly,” Green affirms. “We were able to use all the available technology to help us stay connected and clearly communicate throughout the entire production. It was quite incredible.”

Asked what, in the end, stood out most for him about the series, Thomas offers a somewhat surprising answer.

“I am a writer at heart,” he says. “But what really stands out for me is the design of the city, Harmony Harbor. Everyone who sees the series says the same thing: they want to live there. It manages to look quaint and big-city at the same time. And it also manages to look lived in, broken in, like a comfortable pair of shoes.” ‘Baymax!’ Provides an Rx for Humor and Compassion
How Digital Domain Brought Photoreal Characters to Life in ‘The Quarry’
SCAD GamingFest: Building Shared Story Experiences with Diverse Character Design
Mission Critical: ‘Lightyear’s Journey to Infinity and Beyond
Putting the Fun in Dysfunction: The Non-Humanistic Therapy of ‘HouseBroken’
‘The Freak Brothers’: This is Your Humor on Drugs
The Heroic Logistics of ‘Superman & Lois’ VFX
END_OF_DOCUMENT_TOKEN_TO_BE_REPLACED