Animation directors Will Beecher and Merlin Crossingham detail their journey transporting Dug, Hobnob and Goona from the Stone Age to the football stadium. 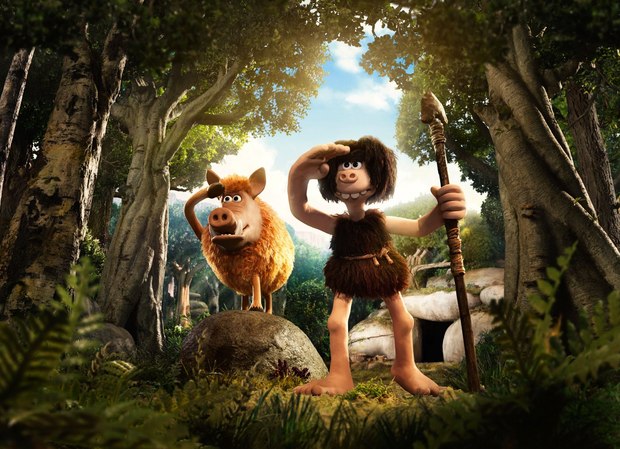 Twelve years in the making, Aardman’s Early Man is a Claymation sports comedy hidden within a caveman comedy, providing nearly 90 minutes of family-friendly sight-gags and silly puns acted out by adorably funny-looking characters. The stop-motion animated feature from Aardman Animations was released in the U.K. on January 26, and is now playing in U.S. theaters from distributor Lionsgate. In this first solo feature from four-time Oscar-winning director Nick Park, our heroes are a Stone Age tribe living out a modest hunter-gatherer existence in a fertile valley somewhere near the future site of Manchester. The group is seemingly unaware that the Bronze Age is already underway until a slightly more advanced civilization moves in to colonize their valley and banishes them to the wasteland. Dug, voiced by Eddie Redmayne, discovers that the Bronze Age city-dwellers are devoted to the game of football -- “soccer,” as we call it stateside -- and decides to teach his fellow tribesmen to play the game in order to challenge the Bronze Age villains for the rights to their land.

Dug faces off against the pompous, money-hungry Lord Nooth (voiced by Tom Hiddleston with a goofy French accent) alongside his stalwart sidekick Hognob (Park) and the spirited Goona (Maisie Williams), rallying his tribe to compete in a match against the Bronze Age team, Real Bronzio.

Written by Park, Mark Burton and James Higginson, Early Man had been in development at Aardman Animations since 2010, beginning with the director’s doodles and initial story ideas. Writing and storyboarding took about four years, and animation production -- begun in May 2016 -- was completed in the final weeks of 2017. Roughly 150 people were directly involved with the making of Early Man, with 33 animators working on the film at the peak of production. Early Man employed 273 puppets, made by 23 different modelmakers over a 30-month timespan. Each individual puppet was created over a period of more than 10 weeks, with the model making team completing a total of 18 Dug puppets, and eight of each member of the Stone Age tribe. A total of 3,000 interchangeable mouths were crafted for the film’s characters by hand. For the sets, Aardman’s art department made 60 trees for the Stone Age tribe’s forest -- each one taking about a week to complete.

Park was determined to direct Early Man alone, which meant significant changes in the way the production, at Aardman’s Aztec West studios, was organized. Where normally Park would be “directing the floor,” overseeing and doing the rounds of all the animators creating different scenes, for Early Man -- the studio’s largest production -- that task was assigned to two other Aardman stalwarts, Merlin Crossingham and Will Becher, who served as animation directors. This arrangement left Park free to direct the voice actors and to keep refining the story as production progressed.

“Unlike animation supervisors, we were directing all of the crews,” Becher, who has been with the studio for 14 years, explains. “We directed the art department and the cameras, all the different elements to create the shot before briefing the animators.”

“It’s his movie. He’s the overall director,” Crossingham, who joined Aardman as an animator in 1996, adds. “Essentially, in a nutshell, we made the movie happen on the studio floor for Nick.” With the final act of the film focused on a full-scale soccer match held in a massive stadium environment, Early Man is Aardman’s largest production in a number of ways. The studio space expanded to a whopping 51,00-square-feet, with sets ranging in size from a ping-pong table to an entire tennis court.

“We had to hold the whole movie in our heads the whole time,” Becher notes. “That alone is a massive challenge.”

“At one point, each of us had 21 units,” Crossingham remarks. “So that’s 21 different shots and locations all going on simultaneously, across about 10 or 11 different sequences. Because it’s not shot sequentially, so we ended up shooting bits of the start and bits of the end and bits of the middle all jumbled up, depending on what works best for the studio floor.”

The duo decided early on that the work would be divided firmly down the middle. “We looked at the sequences, and we went through them, and sort of picked out if there was a particular one that appealed,” Becher recounts. “But generally, we pretty much split it in half, so that the entire studio floor could constantly have access to us.” “For example, Will did Nooth being massaged. Then, I did most of the stuff down on the pitch for that sequence. That’s a very obvious division. Where Nooth and Dug go down into the mine to see all the old cave paintings, for example, I did that run of shots,” Crossingham details. “Often, production sequenced things as chunk for management purposes, more than anything. But sometimes it’s just a natural finish to a scene. We’d try and take those, since it’s self-contained. And we can maintain the story arc and what the characters need to do, all the continuity.”

For such an enormous undertaking, comprised of the tiniest details and movements, getting it right is always the primary goal. “With stop-motion, you can’t go back and change something midway through. It’s all or nothing,” Crossingham underscores. “This is not like CG or 2D, where you can tweak positions or frames in the middle of a shot. And I must say that going again on a shot, you never get the same sort of vibrant life in animation, because there’s inevitably a part of it, which is just the bit that worked, you end up repeating by the numbers. It’s almost better to think, well, that shot didn’t work. Let’s try it from a slightly different perspective, so as it becomes a take one again. Because a take two never quite has the freshness or vibrancy in stop-motion, in my experience, than the first. Something kind of raw or exciting about getting it in one.”

Each sequence of Early Man presented its own challenges in terms of staging, lighting and cameras. “There’s a shot quite near the beginning when Dug’s been taken off to the Bronze World, and Hognob is left on his own,” Becher mentions as an example. “In this case, not only did we have to pull this camera back, but we had to pull trees in front of the camera as it went past, so that it feels like it’s traveling up through the canopy,” he details. “We started on an iPad, just, I sort of filmed a rough move with my hand to try and give the guys a sense of the shape of it. Then we spent a few weeks doing all those different tests before we animated the shot.” Another example is the sequence where Dug and Nooth go down into the mine to view the cave art left by Dug’s ancestors. “It opens with a big camera move, as they both come into the dark and Nooth’s torch lights up the cave, into another move where the camera is going counter to their action. They’re walking across a bridge, and then the camera moves continue as Dug walks. So the camera is kind of always leading and coaxing them down, deeper and deeper and deeper,” Crossingham describes.

“That was very much part of what Nick wanted the camera to help tell the story, to sort of be enticing and leading,” says Crossingham. “Again, the two opening camera shots were big, kind of glamorous. This is where we are, kind of setting the scene moves. The rest just had to then become part of the storytelling, almost telling a character with us, going and just not sort of hogging the limelight. Because they were very subtle performances required from the characters. That’s what your eyes needed to be on, not the motion going past. You just needed to be with them. So it was a very nice balance of the two styles of camera work that we focused on.”

“In Aardman, we’ve got this amazing team of motor car operators. We’ve got a couple of Milos, they’re called, which are robotic arms which are programmed frame by frame, so we can repeat a move over and over again, and it can be animated,” Becher adds. “There was a shot where we start on Hognob quite close, and we pull back away. We’re going upwards but we’re twisting. There’s so many axes involved. Because it’s an organic process, it takes a while to find the shape of the move, but also we have to find within that the set dressing, the access for the animator, and then the final lighting.”

“It’s a really tricky thing with a camera move in animation,” Crossingham continues. “In live-action, it’s often done by an operator, and the operators have years of experience. You’ve employed them because of their style of camera work. Our motion control operators have to have a similar understanding. Because a moving camera in animation is one of the things that helps it feel big and cinematic and wonderful. But also, the camera moves shouldn’t really be conspicuous. They need to be part of the fabric of the movie. Occasionally, you put a gratuitous one in for a big moment or something like that, but there’s a lot of camera moves in this movie, and most of them, hopefully, are kind of invisible. They just go with the action or they go with the moment. Finding that sweet spot is really quite challenging.”