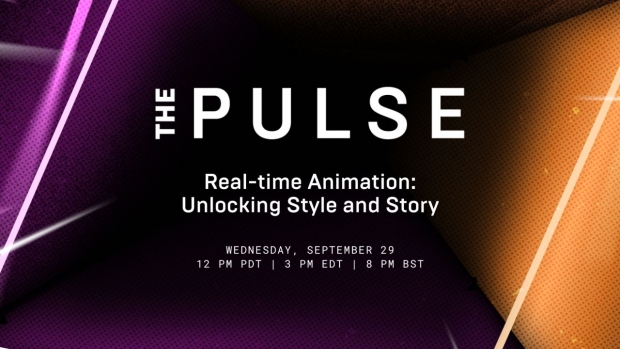 Animation World Network has a reputation for staying on top of the latest animation technologies, so it’s only fitting that AWN’s Dan Sarto hosts Epic Games’ latest episode of The Pulse.

In Real-time Animation: Unlocking Story and Style on September 29, real-time innovators will get together to talk about new paradigms for real-time animation pipelines. Joining Dan are David Prescott, SVP of DNEG Animation; Jason Chen, EVP of BRON Digital; Kevin Dart, Founder and Creative Director of Chromosphere; and Karen Dufilho of Epic Games.

Epic Games started The Pulse in August of 2020 to explore emerging trends in interactive technology across a variety of industries, including animation. Each video episode features a panel of innovative leaders discussing how real-time technology is changing the way designers, artists, directors, and other creatives work within their fields, followed by a live Q&A.

Topics on The Pulse have ranged from architectural visualization to virtual production and digital twins. This time around, Epic is taking on real-time rendering for animation and the many benefits it gives beyond just faster turnaround. Over the past decade, the visual quality of real-time rendering has evolved by leaps and bounds thanks to continuous upgrades and the inclusion of ray tracing, dynamic lighting, real-time post effects, support for strand-based hair and fur, and high-resolution scans of real-world textures.

Numerous industries outside games took notice, particularly in the field of architectural visualization, followed soon after by film and television. These industries find that real-time technology gives a boost to a number of traditional production techniques, and in some cases opens the door to visualization options they’d never had access to before.

For media such as film and animation, there are numerous places where real-time rendering can speed up the work, giving artists and directors more room to collaborate and experiment. For example, during a motion-capture session, the motion just recorded can be live-linked and transferred to a CG character for instant feedback on how the motion looks. If it isn’t quite right, the director can guide the actors and order a new take on the spot. Such a workflow ensures the director’s vision is realized, and avoids costly do-overs.

Real-time tech also makes it possible to see final pixels much earlier in the production process, eliminating the silos that have traditionally separated the layout, production, and post-production stages.

With Unreal Engine, everyone from 3D artists, lighters, and VFX specialists to the director can see the end result developing at final or near final-pixel quality. The ability to collaborate and iterate gives way to experimentation in storytelling, ultimately leading to better ways to craft the narrative. Artists have additional time to focus on the more creative side of production rather than the technical.

Engine House, a small animation studio in Cornwall, UK, experienced this boon in creativity first-hand. They recently created their animated short Wylder entirely within Unreal Engine. The team cites the ability to iterate on look development as a crucial part of their process. Concurrent with trying different lighting and texturing solutions, Engine House was able to continue developing scenes, confident in the knowledge that they could easily and quickly transfer the final look to other scenes and see the results in real-time. Even the fireflies that populate many scenes were created in real time - in fact, the final short film is rendered entirely as final pixels from Unreal Engine, with no further processing. The ability to be more creative - to try different approaches, test new scenes, change the camera angle, try a new color scheme, and test post effects - is the advantage cited most often by animation teams that have moved to a real-time workflow. Instead of wondering whether you should use bloom to enhance a scene in post, click a button and see for yourself, instantly. Would the scene be more dramatic if shot from a different angle, or with different lighting? The answer is minutes away.

Unlocking real-time on The Pulse

These advantages, and others, are why Epic Games focuses on a real-time animation pipeline in their latest episode of The Pulse. In Real-time Animation: Unlocking Story and Style, you’ll hear firsthand how DNEG Animation leveraged a real-time pipeline for their animated short Mr. Spam Gets a New Hat, how Chromosphere is doing the same with Yuki 7, and how BRON Digital is using real-time techniques to produce their new Fables series. They’ll talk about their own experiences with real-time rendering and workflows, and answer questions at the live Q&A after the discussion.

To participate in the live Q&A and find out how you can spend less time on rendering and more on storytelling, register for Real-time Animation: Unlocking Story and Style in your time zone. You can also visit Epic Games’ Animation hub for more stories about studios using real-time technology to enhance the creative process.