Inspired by ‘Yellow Submarine’ and dreamy 60s visuals, Emlyn Davies and Josh Hicks first take viewers to a vibrant euphoria, then a distorted hellscape, in the animated short supporting the ‘Medicine at Midnight’ album. 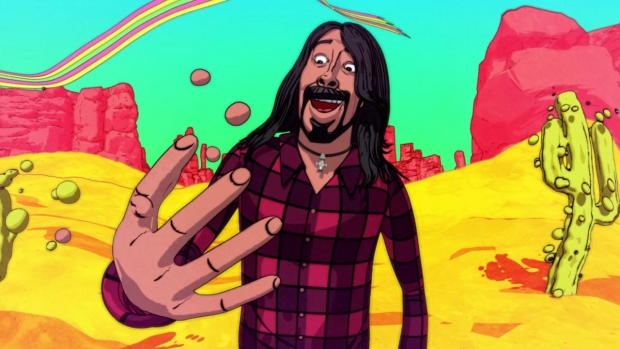 After working on the music video for another of the album’s tracks, “No Son of Mine,” Bomper was approached once again by RCA, this time looking for a whimsical approach for the dreamy and immersive track. Described as “weird and mellow” by keyboardist Rami Jaffee, the initial brief was to explore motifs within the song by taking the band on a psychedelic, technicolor journey reminiscent of The Beatles Yellow Submarine.

Influenced by the 1960’s psychedelic art movement, the film is an animated hybrid 2D/3D short that follows the Foo Fighters on a fantastical voyage through a colorful desert, filled with dreamy and surreal visuals. As the band explores this vibrant utopia, however, things begin to turn dark as they fall through the earth into a hallucinatory hellscape, filled with increasingly bizarre distortions of wildlife.

Begin the journey… if you dare!

The production took place from February - April 2021. Director Emlyn Davies and co-director Josh Hicks worked to develop a story filled to the brim with trippy imagery and animation. The chosen setting was a landscape    reminiscent of the Sonoran Desert, often chosen as a shorthand in narratives of existential isolation, where characters can lose themselves mentally, at the mercy of the elements. What begins as a barren and uninterrupted landscape, also offered the team a blank screen onto which they could project their fantasies. Taking everything you would usually see and turning it on its head.

Being huge fans of psychedelic art from the 1960’s, Bomper started their explorations there, focusing on flat colors, bold outlines, and distinct shapes. The team also looked at the whimsical styles from the designs by Victor Moscoso and Peter Max - richly saturated colors in glaring contrast, swirling patterns, repetition, and surrealism. Bomper chose Arnold for rendering, feeling it best suited for the key line approach. Cinema 4D was used for all rigging, animation, modelling, and texturing; Zbrush was used for character sculpts. Achieving character likeness within the style, without embracing caricature, was key; the team looked to celebrity animation from the 1970’s, such as Hanna-Barbera cartoons, in particular, episodes of Scooby Doo, which included guest appearances that fit within the world. Taking a cue from their work with Colonel Tony Moore on Tyler Childers’ Country Squire, Bomper employed a technique called “Chicken Fat Storytelling,” which involved packing shots with in-jokes to make viewing more enjoyable and rewarding. Fans might notice callbacks to Foo Fighters’ past work such as “Everlong,” “Monkey Wrench,” “Pretender,” and “DOA.”

According to Davies, “We really wanted to lean into artwork of the 1960’s with key lines. Normally, we render in Octane for most of our productions. Unfortunately, the toon shading in Octane is not quite as robust as Arnold and couldn’t give us the specific key line style we were looking to achieve. Sketch and Toon got us pretty close, but unfortunately didn't offer the same kinds of speed or consistency with the drawing of key lines that we were getting from Arnold (which is what we went for in the end). This exploration ate it into the already tight production timeline, but luckily we still managed to hit delivery!”

To really push the psychedelic and experimental motif, Bomper included cutaways and vignettes within the larger composition. These included face and body deforms to create otherworldly characters and illusions, trailing effects, lip syncing in unexpected places, and abstract liquid effects. The film plays with scale, bright hues, and the cartoon form through animation that squashes, stretches, and breaks throughout; ultimately delivering a tripped-out film drawn straight from the subconscious. For Davies and Hicks, the biggest challenge on the project was the schedule. “Time was a huge challenge for us,” Davis notes. “We had just over two months from pre-production to final delivery, which is really tight for a four-minute character film. We just really had to hit the ground running and size up quickly. We really hope the audience enjoys the trip we've taken them on!”

Visit the Bomper Studio website to watch a series of behind-the-scenes clips of the video’s production.