Co-founders Clément Calvet and Jérémie Fajner went from 2 artists working in their living room to 600 artists working in Paris, Milan, and as of next month, a brand-new location – with USD pipeline - in France’s growing animation hub. 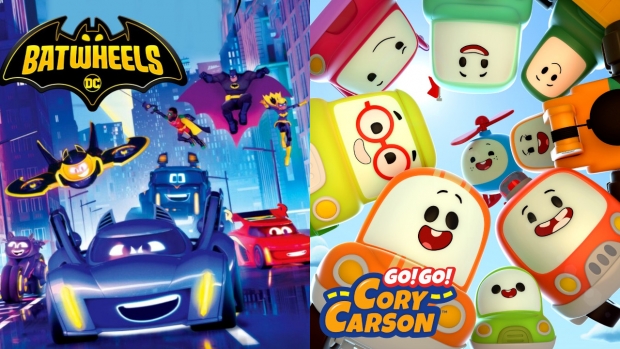 What started as a living room business of two has expanded to a studio staff of roughly 600, with two studio locations in Paris and Milan and a third opening its new building next month in Angoulême.

“It’s a new start,” says Superprod Studio president and producer Clément Calvet. “Even though it’s been 12 years, it feels like we’re at the beginning, the two of us in a living room making business plans. It's a nice setup to consider the future now and have a strong basis to be able to dream of great projects.” Superprod’s managing director Jérémie Fajner adds, “This new studio symbolizes new projects and new talents coming into the company. It’s also a symbol of our achievements, and something that materializes our ambitions.”

Calvet and Fajner – who first met 23 years ago at Alphanim, which later became Gaumont Animation – have also produced six feature films with the studio, three of which have been released – Cartoon Saloon’s Song of the Sea, Cafard, and Alexandre Espigares’ White Fang –and three still in development.

They’ve worked with partners such as France Télévisions, M6, TF1, Canal +, Disney Channel, Cartoon Network, Super RTL, BBC, RAI, Orange Studio, OCS, Cinéfrance, Studio Canal, Haut & Court, and Telepool and hope that this new studio opening in Angoulême will send up a Bat-signal to other studios that Superprod is open for even more collaboration opportunities.

“Angoulême is a hub in France for animation,” explains Calvet. “Paris is obviously the number one place, in terms of the number of people working in animation studios. But Angoulême is a close second. They had started promoting animation over 25 years ago, so they're a bit advanced compared to other cities. Jeremy and I decided that it was about time to have a place that shows the ambition of Superprod within this hub.”

Originally an old, derelict warehouse that was completely gutted, Superprod’s Angoulême studio is a massive space where around 300 studio staff will be working (roughly the same number working at the studio’s offices in Paris). The new space will harbor a screening room, editing room, sound recording facilities, a rooftop for cocktails… all the amenities to make a studio fun and successful.

“Of course, the first order of business is to open with a big party,” says Fajner. Like their Milan and Paris studios, Angoulême’s will cater to both 2D and CG productions, as well as oversee animation projects from beginning to end (pre-production to post-production).

“When we first started out, we were only doing the pre-production,” remembers Calvet. “And then we would do the production in Asia, in different studios. The big change in our company was in 2015, when we decided to stop that way of producing our shows and features and bring all parts of the work to France and do everything from here. And that's why we're now in need of more space because we handle everything ourselves.”

Fajner adds, “This way, we can also really control the shows we do because what counts at the end of the day is what you consume on screen. And that's the result of a long process and we master that process so we can really master the production value and maximize it.”

The new studio’s opening also marks the beginning of Superprod incorporating a new USD-based pipeline. Superprod will be the first French studio to have a fully developed pipeline based on Pixar’s USD technology, a high-performance 3D data interchange framework used more and more for collaboratively constructing animated 3D scenes, designed to meet the needs of large-scale film and visual effects production.

Pixar created this USD technology to provide a format for representing 3D scenes that is vendor neutral. Now available as open source, the platform is fast becoming a key industry standard, and it allows the Superprod teams great flexibility, as they are no longer locked into proprietary formats of any one tech vendor.

Until now, each supplier had its own format – Autodesk, SideFX, Foundry – and when USD technology emerged, the Superprod team understood its future significance, choosing to develop a pipeline, for all production stages, based on this format. This pipeline was named Pipeline Flow and each creative department (modeling, surfacing, animation, etc.) uses its own software tools, with USD at the center of all data exchange. The creation of this pipeline began in September 2019 and will be operational this month. The newly developed pipeline comes at an opportune time for Superprod as they are about to begin work on an ambitious animated feature.

“We can’t talk much about it, but we’re about to start a new CG feature that is something very, very big, maybe the biggest in France,” shares Fajner. “So, we're very happy about it. We hope we can announce it soon. It doesn't depend on us.”

Superprod can share that they are working with Sanjay Patel on the Hindi series Ghee Happy, as well as the recently announced second season of Batwheels, as well as launching one of their own projects, Me and My Compost, one of 15 original works the studio has in active development. France Télévisions greenlit the project, which began development back in March, and the series will release next year. They are also developing an animated feature The Kid, based on Charlie Chaplin’s film of the same name.

“We want to do a diversity of projects – comedies kids can laugh at, adventure series they’ll be thrilled about – but for each one to be very sincere,” says Fajner. “That’s hard work. But we believe in what we do very seriously, and we hope that shows.”

Along with Superprod’s ambition and growth, the Angoulême studio also symbolizes a concept Fajner, Calvet and their team have held dear even in the aftermath of COVID: connectivity.

“COVID brought some flexibility and we're doing more remote work than we used to do, but everybody gathers together the majority of days in the week, and sometimes every day, at certain stages of the production,” notes Fajner. “You need this connection. You need human interaction. That’s what I love immensely about animation. It’s a very collective work. I’m sure it would be more economical to not have a studio or have anyone working together but…” Superprod, in the words of Calvet and Fajner, is like “a big family,” where the first group of people hired over a decade ago are still with the studio today and have grown as it’s grown.

“Many of them now lead different departments,” says Calvet of those early hires. “In the beginning, we had all these people who we wished we could hire. And, year after year, we're able to come back to them and say, ‘Do you want to work with us?’ Time flies and now, we've worked with everyone that we had wished we could work with. Even Lassie’s producer Doug Schwalbe. We were so happy to have him with us when we were working on The New Adventures of Lassie. It was quite a boost. And now we work together again.”

He continues, “That's the great thing about building a company the way you want to shape it. You have great colleagues who are your friends, and you can do great stuff together and have fun doing it.”

And even after all the success, the awards, the growth, and with plenty of room to stretch their wings in a massive new space, Calvet and Fajner still never forget the studio’s living room roots and, in fact, still incorporate that nostalgia in their new environment.

“We actually share an office,” says Calvet. “We’ve made it the new living room.”

Choc Chip Animation Riffs on Pop Culture in ‘The Art of Murder’
F is for Flake: The (Not So) Great Animation Robbery?
Re-VIEW: ‘Avatar: The Way of Water’ – A Miraculous Vision
‘Kung Fu Panda: The Dragon Knight’ Celebrates a Special Lunar New Year
END_OF_DOCUMENT_TOKEN_TO_BE_REPLACED