Storyboarding the Crazy Hijinks of DreamWorks’ ‘Archibald’s Next Big Thing’

With an Annie Award nomination for the ‘Baritone Tea Part 1’ episode, artist Ben McLaughlin discusses how a brave, sweater-clad chicken’s unending optimism helped him board one wild, epic musical adventure. 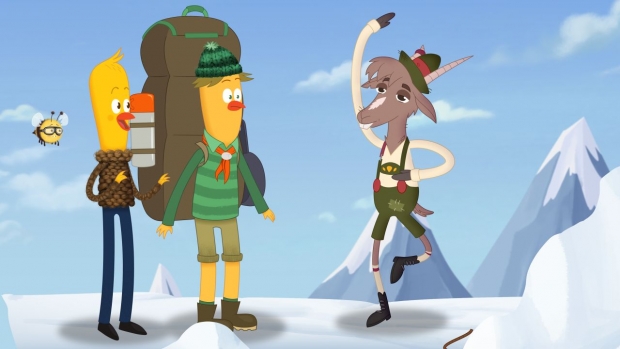 The series, based on Hale’s children’s book of the same name, features the misadventures of a very yellow, mostly endearing chicken named Archibald (Hale); his hijinks have been bringing fans much-needed comedic solace for the last three years. From whale riding and figure skating, to rocket launches into space and coasteering in cave mines, Archibald’s antics in his hometown of Crackridge know no bounds.

On top of which, the series just received an Annie Awards nomination for Best Storyboarding - TV/Media for the episode “Baritone Tea Part 1.” This year’s virtual Annie Awards ceremony is streaming live on April 16.

In the episode, Archibald - on the verge of frying his tongue from jalapeno nachos - accidentally drinks all his brother Finly’s magic, musical-voice-enhancing tea. Finly (Jordan Fisher), under pressure to perform a famous and beloved Crackridge musical number, seeks advice from his music teacher Mimsy, who tells him of the harrowing journey he must take to find the ingredients for the secret “Baritone Tea.” While Finly, who believes there’s not enough time to find the ingredients, resorts to seeking help from their scientifically gifted sister Loy (Chelsea Kane), Archibald takes it upon himself to track down the sweet roots, flip-flop flowers, and purple hot springs water needed to make his brother’s tea. Archibald’s character has been on some wild adventures before, but “Baritone Tea” takes the brave chicken on an epic, musical adventure, exploring deserts, snowy mountain tops, secret caverns, and more. Nominated storyboard artist Ben McLaughlin has worked on other Archibald expeditions, such as “The Royal Strutters,” “Lake Ball Pit,” “New Crackridge,” and “Stuck in Skates.” But he says “Baritone Tea Part 1” was his favorite; he shared with us how the team brought this journey to life, the dos and don’ts of storyboarding, and why this episode showcases the best of Archibald.

Victoria Davis: You’ve storyboarded for plenty of animated series before - Winston Steinburger and Sir Dudley Ding Dong, The Wild Adventures of Blinky Bill and Sea Princesses - but what made working on Archibald’s Next Big Thing unique from other projects?

Ben McLaughlin: I really loved and identified with the character of Archibald right away. I found him very appealing, the way he was not immune to disappointments, but had an optimism for life that always won out in the end. In my mind, the character is a lot more three-dimensional than most cartoon characters, and I loved exploring all his quirks, both his flaws and his attributes.

The team I worked with was so encouraging and this pushed me to keep trying to make each episode better than the last. The series also had both terrific writing and voice-acting, so it was always a pleasure to work with such great material.

VD: You've boarded on quite a few episodes for Archibald's Next Big Thing. Was 'Baritone Tea' a favorite? BM: ‘Baritone Tea' was definitely a favorite. As a musical episode, I felt like there were a lot of extra opportunities to make Archibald do silly stuff, which I always like.

VD: This story takes us all over the different landscapes of Archibald’s home, visiting mountains, caves, and hot springs. Was it difficult mapping out such a vast adventure in two 10-minute episodes? And, at the same time, was it a fun challenge?

BM: I boarded the first part, and my colleague Tang Lee boarded Part Two, so it was cool to see our different approaches sort of meet in the middle. For my part, I tried to visualize the episode as an adventure, where Archibald essentially starts walking out his door, traveling screen right, and eventually getting to the mountains at the end: screen left. I find if I try to keep a general directional flow throughout, then it's easier for the audience to stay on the ride, and not get lost, even if there are crazy musical interludes.

VD: What type of notes and other directives did you get from showrunners / directors on these episodes? Do you pitch the boards, or just present for review? What was your collaborative process for helping develop the episodes?

BM: By the time I got to this episode, I had a great rapport with the directors Eric Fogel over in the States and Andy Collins here in Sydney, where I'm based. They gave me a lot of free rein to just do what felt was right. I would rough out the episode in three weeks, then get feedback and notes, and then spend another three weeks altering and cleaning up the board.

VD: Storyboarding, in general, seems like an open, creative process, where your mind is free to explore. But are there any dos and don’ts? What makes a solid storyboard?

BM: I think the main thing is getting the episode to read clearly. How can I play out this script in the best way, and not miss the point or confuse the audience? I think it works well to establish each setting in a nicely composed wide shot, and then cut into mid shots and close-ups. I don't like when there are a whole bunch of mid shots in a row. You kind of forget where the characters are, who is where, and what the point of this section is.

Another important thing when you are boarding is to try and keep an overview of the whole episode and stay on track. Don't get bogged down making one drawing look too pretty if you need to do twenty more scenes by the end of the day! I may or may not apply my own advice in this case. VD: A lot of unusual things happen in these episodes - from lava funneling down a cave to identifying flip-flop flowers. Were there any inspirations you drew from when creating the storyboards?

BM: Well, as this was a musical episode, I just followed the feel of the music. I like that part where Archibald visits Mimsy. I was kind of channeling West Side Story a bit with those weird cats coming down the stairwell in a group, clicking their fingers.

VD: What are your favorite shots or sequences in the episode?

BM: Well, this might seem silly, but I love that part when Mimsy yells 'Forget the tea! Be on your way,' and Archibald is instantly at the door, and has taken some random hat from a hat stand and is ready to go home. For some reason, I find that hilarious and I cracked myself up drawing it. Most of my favorite parts are probably weird little things that nobody else notices. VD: How do you feel this Annie-nominated episode showcased the best of not only the show, but the creative minds of the team behind it?

BM: Drew Champion and Jacob Moffat wrote a great double episode with ‘Baritone Tea.’ As much as the show is about Archibald and Bea, it is also a bit of an ensemble sort of thing, and we get great moments with all his siblings in this one, as well as a host of great other characters.

That's the wonderful thing about Crackridge - there are so many fun characters to work with. These episodes also displayed the lovely design and animation that the series boasts. It's definitely a show to be proud of.

Brad Neely Channels his Arkansas Childhood in ‘The Harper House’
Playing a Deadly Board Game of War in Iron Maiden’s ‘Stratego’ Music Video
Patrick Osborne Takes Billie Eilish on a Dreamy Iconic LA Tour
Cantina Creative Helps Turn the Hands of Time in ‘Loki’
Paul Lasaine Talks the Not So 3D World of ‘What If…?’
‘Twenty Something’ Plumbs Adulthood Insecurities… in a Good Way
40 Years in the Making: ‘The Smurfs’ Return to TV
Defying the Laws – or Mere Suggestions – of Physics in ‘F9’
END_OF_DOCUMENT_TOKEN_TO_BE_REPLACED