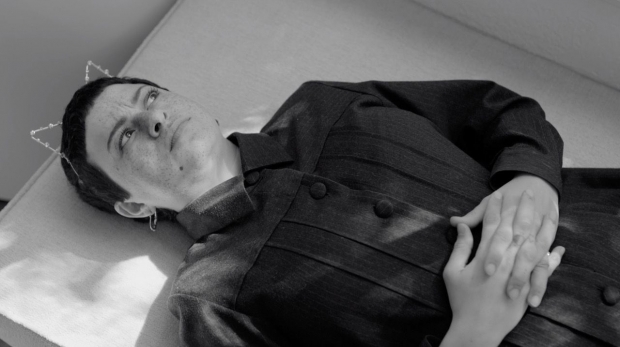 Home to thousands of original stories, with over 20 different genres - from romance to horror - and dozens of illustration styles - from colorful and cutesy to detailed and dark - WebToon offers free, online access for comic creators and fans alike. For the past two decades, WebToon has gained a loyal following in China, Japan, India and its place of origin, South Korea; it is also becoming increasingly popular in the U.S., in part because the platform has taken a new approach to appeal to U.S. comics fans: live-action promotional videos.

WebToon’s new promo project, “Stories to Obsess Over,” is spearheaded by Fred & Farid creative director Chelsea Steiger and cinematographer Kevin Phillips, the project’s director. “Stories to Obsess Over” tackles one featured WebToon series after another, creating a one-minute, black and white teaser for the comic, featuring a well-known U.S. actor who takes on the persona of the comic’s main character and begins monologuing lines from the story.

The two promo videos that have been released for the comics Freaking Romance and Cursed Princess Club have a French noir feel to them, with close-up face shots and abrupt but timely cutaways to broken pearl necklaces, ticking clocks, falling petals, steaming pies and flickering light bulbs. The segments have a nebulous tone that, as Phillips describes, “shifts between melodrama and deadpan comedy under this guise of high fashion allure.”

“It creates an interesting dimension for audiences to interact with,” says Phillips. “Doing something different from what the comic is, while still promoting the comic, I think that automatically creates a more interesting layer for engagement from the readers or the video audience.”

Freaking Romance, starring Alia Shawkat from Arrested Development, and Cursed Princess Club, starring Kimiko Glenn from Spider-Man: Into the Spider-Verse, can be watched below. The third video’s release date has yet to be announced.

This is not the first time WebToon has utilized live-action videos to promote their comics, with Naver WebToon in South Korea also creating a series of black and white videos to entice viewers to read more stories.

“The videos performed super well for them and I think for us, we certainly really embraced it,” says Steiger. “We also really love the nature of the black and white films and how it allows for the colorful WebToon illustrations at the end of the films to really stand out, and it was a way to keep consistency between our series and the Naver series.” But what’s made “Stories to Obsess Over” unique is how the production has embraced the true magic of these comics as a window to the world during the COVID-19 pandemic. While Naver’s videos were shot in traditional film studios, Steiger and Phillips’ promo videos have been set in the homes of the actors they are filming, with one (or a select few) persons present on set and Steiger, Phillips and the rest of the production team calling the shots remotely via video call.

“We get this notion of the readers being stuck at home during quarantine,” Steiger explains. “And during this time, they've become obsessed over these stories and are starting to sort of become the comic themselves. And with us having to shoot these videos in the actor’s homes, it really worked with the creative idea to make it still feel real and how readers would feel obsessing over these stories in their own home.”

“But it’s kind of like NASA instructing the Apollo mission,” Phillips adds. “Directing the talent is one thing, but then also instructing them on how to use a tripod is something else entirely. So, it was daunting, but it was also exciting.”

The team’s first video on Freaking Romance -- which follows the comedic and charming story of a young woman whose new apartment is haunted by a handsome ghost. The production faced some significant learning curves; since everything was filmed remotely, pro-grade cameras, lights, props, computer video and the rest of the set had to be organized at Shawkat’s home prior to shooting, with every angle and lighting adjustment already noted ahead of time.

“We had to be very precise and very pre-visualized with everything we were doing, down to the height that the camera should be, and where a bounce card should be and which windows we wanted to block out in black,” says Phillips. “It's all normal film stuff, but we just needed to be hyper tuned to it and so much more needed to be done minimally and up front.”

Luckily, Shawkat’s brother, Sharif Shawkat, volunteered to help with on-site adjustments during filming, which Phillips said was an invaluable asset. “The pieces demanded craft and doing it without a pandemic would have already had its own set of challenges,” Phillips continues. “So, this was a whole new set of parameters doing everything remotely. But filming at Alia’s house let us embrace the limitations that the pandemic was setting on us in a way and created videos that were a lot more real for how readers themselves would be feeling.” He adds, “Advertising is always at its most interesting when it's doing unique, challenging things that stretch barriers.”

The challenges faced by the “Stories We Obsess Over” team are multi-layered, starting with sorting through thousands of WebToon stories to find one that, as Steiger puts it, “is weird, unique and has a twist you don’t expect.” Then, the production team reads the comic in its entirety--which sometimes can encompass 50 or more chapters--and pulls all the lines from the main character. A writer then takes those lines and makes a script, or 20 different versions of a script, to fit the essence of the story into a one-minute video.

“It has to be broad enough where the script invites you in and still feels like you're understanding the overall take to the story and what will resonate with the current readers,” says Steiger. “We really try and honor what the creators have written with a proper portrayal of the story, not straying too far, or making it feel like something that it’s definitely not. It's just really about our team holding hands together to make the process as smooth as possible and to work our way up to the final shoot to make sure all the pieces are intact. We've gotten really lucky in the fact that the talent has gotten really excited about the project and about the platform in general.”

Though neither of them knew about WebToon before signing on to the project, both Steiger and Phillips say they are now avid WebToon comics fans; Steiger even says that she “buys coins to get chapters earlier and binge them.” “These videos help bring in a new audience and shows how strong the storytelling of these comics is,” she says. “Oftentimes, people who are not as well versed in the world of comic reading, can often think that it's more childish and that the stories aren't as powerful or strong when they see the illustration style. But when you see these really strong actors performing the comics, it starts to show how strong that storytelling really is and how fun and engaging and nuanced the characters can be.”

Steiger and Phillips say they are also seeing others give WebToon a try and have received positive feedback on the promos from already long-time readers. “When we saw that first launch and saw the positive comments, we felt like we had done something pretty special,” Steiger shares. “When you're working with something that has so many fans already, you want to make sure that you're doing things in a way that the fans are not gonna hate on or feel like you did a disservice to the thing that they love. That was probably the most important thing to us. These stories are surprising in how many different people can fall in love with them.”

Phillips adds, “We’re trying to create something that’s compelling, fun, funny, gorgeous, and that stands out. And, hopefully, by breaking new ground, we compel others to try new things and read these comics.”

‘Natural Habitat Shorts’: Like ‘Ranger Rick,’ But for Adults
Framestore Sets Sail on ‘1899’ with New Virtual Production Tools
Animated Characters: The Art of Babbitt – Part 1
Bruce Smith and Ralph Farquhar Talk ‘The Proud Family: Louder and Prouder’ Season 2
VFX is the ‘Thing’ for Tom Turnbull on Tim Burton’s ‘Wednesday’
We Need to Chat
Choc Chip Animation Riffs on Pop Culture in ‘The Art of Murder’
F is for Flake: The (Not So) Great Animation Robbery?
END_OF_DOCUMENT_TOKEN_TO_BE_REPLACED