Steven Clay Hunter Reclaims His Childhood in Pixar’s ‘OUT’

In the studio’s first film featuring an openly gay main character, storyline, and on-screen same-sex kiss, the SparkShorts director tells his highly-personal story of a life spent dealing with the challenges of coming out. 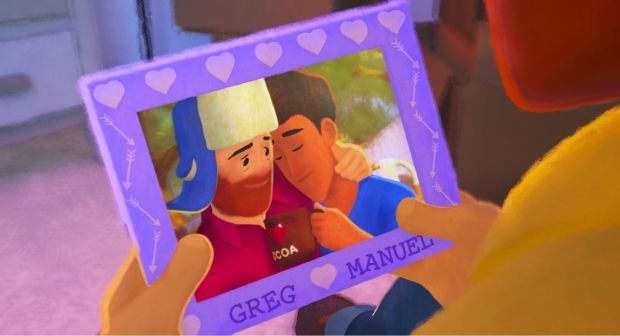 Though it took 27 years before he came out to his parents about being gay, it took Steven Clay Hunter no time at all to decide what story to tell when chosen for Pixar’s SparkShorts inhouse talent incubator program.

“Initially, I had been working on a larger story about these two characters who were friends and coming out, but it was way too large for SparkShorts, so I started tossing a bunch of other ideas around,” said Hunter. “I was even thinking about something with, I think, Dinosaurs? Just weird stuff. But when I thought about what I really wanted to talk about, I kept coming back to coming out stories.”

And so OUT was born, a painted pastel-like animation about a man named Greg (Kyle McDaniel) who, while in the process of moving with his boyfriend Manuel (Caleb Cabrera), is visited at home by his parents. As his gleeful mother and stoic father arrive with pizza casserole in tow, Greg tries desperately to hide all evidence of his relationship with Manuel, fearful of his parents’ reaction to the abrupt realization their son is gay.

But, in the chaos of a mother’s unstoppable packing mission and his own clumsy attempts to hide his true self, Greg and his dog Jim end up swapping bodies. Suddenly, an already precarious situation begins to unravel, with Greg powerless to stop it. The film was released in Summer 2020, shortlisted for an Oscar nomination, and eventually nominated for a GLADD award. Now available on Disney+, OUT displays plenty of humor, but at its core, unpacks the struggles of interpersonal communication and how distrust and misunderstanding can cause people to unintentionally hurt those they love.

“I wanted to talk about the experience and what it does to us,” Hunter explains. “You're taught to not be yourself for so long. And then you want to just get on with your life but you're constantly thinking things like, ‘What if I had been gay during high school?’ or ‘What if I allowed myself to just be out?’ or ‘What if I had kissed that guy?’ There’s a feeling of a lost childhood in some respects.”

For Hunter, creating OUT allowed not only a chance to share his own personal story, but a way to revisit the challenges of his past and help current generations of young people know they are not alone.

“The suicide rates among LGBTQ kids are through the roof and I wanted to tell the story for those kids as well,” he shares. “Part of it was I wanted to make something for my kid-self, and then part of it was developed for all the kids that live in places like the Midwest where it’s still very hard to be out. The more stories that are out there, that are digestible for kids living in the middle of nowhere, especially to watch with their families, that's been the most awesome thing.” Filled with saturated pinks and purples, OUT’s 3D animation has the soft, fluffy texture of brushstrokes made to look like 2D illustrations. Inspired by children's storybooks, Hunter says the goal was to make OUT’s imagery incredibly inviting. Coupled with the fact that the story is all told from the perspective of Greg as a dog, transformed through the power of a mystical pink cat named Gigi, Hunter says the story has received ample positive feedback from kids as well as their families. “I get notes on Facebook and Instagram from people talking about how much they love watching with their family,” he says. “I even got a message from a kid in Brazil who said he watched it with his mom.”

Hunter is a 24-year Pixar veteran, having served as an animator on A Bug’s Life, Toy Story 2 and Finding Nemo, as well as an animation supervisor on The Incredibles, WALL•E and Brave. Prior to joining Pixar, he worked for Walt Disney Animation on many projects including Fantasia 2000 and Hercules.

But OUT, the seventh short film in the SparkShorts series, provided a new kind of animation journey for Hunter; it’s both his directorial debut and the most personal project he’s produced thus far. Not only is the main character based on the director, but Jim the dog is based on Hunter’s own Jack Russell Terrier, whose collar was used for the sound effects of Jim’s collar in the film.

“The pizza casserole Greg’s mom brings over is also my mom's recipe,” he adds. OUT also represents a new narrative direction for Pixar; it’s the first studio film to feature an openly gay main character and storyline, including an on-screen same-sex kiss. But, according to Hunter, the studio has always been interested in personal stories. “Pixar, from the start, has always been a very director-driven studio, where the idea comes from the director,” he notes. “The studio decides whether to back it or not, but it’s a director’s own independent story and it’s usually very personal. Andrew Stanton telling Finding Nemo, which was really about him and how he could be as a father. With the SparkShorts program, I worked with Kristen Lester on Purl, and it was amazing how personal that story was for her.”

And though Hunter says he hopes OUT sets Pixar on a course to tell more LGBTQ stories, “It comes down to the directors having courage to tell their stories. I just feel like I must do my part. When I see people that are out there marching and fighting for our rights, there are people putting themselves out there way more than me making a little cartoon. I can't say that I felt the same fear that those folks are going through, but I have to do what I can in this little bubble that I live in to help forward those goals.”

But these “little cartoons” Hunter refers to are anything but; animation has provided a unique medium over the last few years for creators to approach LGBTQ topics with young kids, from She-Ra and the Princesses of Power’s lesbian love story narrative to City of Ghosts giving voice to same-sex parents and non-binary kids.

“This generation of young kids, they are way ahead of us,” says Hunter. “They don't get the prejudice. It’s not in them. Being able to put more stories out there that show how we can all talk and interact and get along and deal with these issues in a positive way is good for families. It’s all about communication and showing how sometimes people feel more comfortable talking to their dog than talking to each other.” Hunter is currently working to bring more of these stories to viewers with a short series for teens that addresses coming out as well as surrounding themes that come with the journey. The series is based on a former boyfriend of Hunter’s who passed away in 2003. “I didn't realize it at first, but it's the same thing with Jim, where I wanted to make her live again,” explains Hunter. “Now it's like, I'm going to make Andrew live again. I wanted to make something to honor his memory.”

He adds, “There's a lot of people saying, ‘Well, why can't we just have stories about gay characters being awesome?’ And we absolutely need those stories. However, I was someone who kept himself in the closet for so long that I’m still sorting all this out and I need to work it out somehow as an artist as well. This is my way of revisiting feelings and struggles I had as a 12-year-old kid and saying, ‘It does get better.’”

Additional details have yet to be announced for Hunter’s project, which is still under wraps. In the meantime, OUT and other SparkShorts are available to stream on Disney+.