First two episodes, ‘First Kiss’ and ‘Success is Like an Acorn,’ look at trials and triumphs with comedy and inspiration. 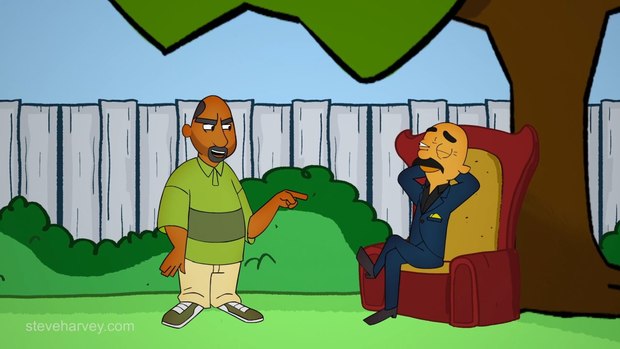 Entertainer, radio personality, motivational speaker and author, Steve Harvey, has introduced a new animated web series, Steve Harvey Stories, featuring the adventures and triumphs he has experienced throughout different stages of his life. Using various stories and voiceovers from Harvey himself, the series touches on topics from his childhood, along with experiences and lessons he’s learned. The first episode, “First Kiss” gives a humorous but insightful glimpse at the weird and awkward experience that is so unique for every individual, yet touches on an incredibly universal moment for most.

The second episode, which dropped on November 15, “Success is Like an Acorn,” lets us see all the dirt needed to make an acorn grow into a tree. Even though every acorn has the potential to grow into an oak tree, it has to be fertilized with a lot of “dirt” which Harvey likens to life’s challenges. "Being successful ain't easy, but just like an oak tree that grows from an acorn - get used to the dirt - that's what it takes to be an oak tree. That's what it takes to be successful,” he explains.

Joshua Roberts and Chaz Bottoms are the creative team behind Steve Harvey Stories. They work hand in hand with Steve Harvey Global (SHG), whose mission is to deliver comedy and inspiration through video, images from Harvey, and shine light on up-and-coming comedians and other talent, producers, and content creators.

With Harvey’s mission so central to who he is and how he cultivates young talent, it wasn’t surprising to hear Robert’s unique origin story of how he was brought on board to help in the creation of the series.

“So, this was just supposed to be my mom and I going to a taping of Family Feud,” Roberts shares. “I didn’t think I’d be walking out with a potential job. Steve was answering a round of audience questions when my mom asked him what advice he had for an art school graduate. He answered with the usual spiel about hard work and networking but followed that up with mention of a project he had in mind and asked if I could handle a test. Of course, I said yes, and about an hour after the taping, I’m contacted by the series’ executive producers, Galit and Thabiti, who tell me that they’re thinking of a short, animated series based on Steve’s life. From there, I got Chaz on board, we created the pilot, ‘First Kiss,’ and that got the ball rolling.” Bottoms, who like Harvey hails from Cleveland, reflects on his decision to get involved in the project, “I'm from Cleveland as well, I have family that went to Kent State. Also being an up and coming black-owned animation company, it was appealing and made sense that we were a good fit for this production. Since the show is starting small as we are, we have the opportunity to grow together and learn.”

Roberts and Bottoms are the team for now, just the two of them. Bottoms handles storyboarding and animation while Roberts lends his hand to character design and general layout. The animation is being produced through Bottom’s CBA Studios in North Hollywood, California.

“Josh and I wear a lot of different hats due to our skill sets,” Bottoms notes. “I handle mainly storyboards/animation and post while Josh works the character designs/layout. The partnership with Steve Harvey Global has been tremendous and their support allows us to comfortably produce this season of Steve Harvey Stories!”

Beginning with the “First Kiss”, Harvey and his team at SHG provided the team with a rundown on the kinds of stories they’d be working on. Bottoms and Roberts then looked at a lot of different designs to figure out a consistent style and tone to fit the animated web series. Through animation, they set out to capture Harvey’s life experiences, and lessons learned, in an expressive, colorful and comedic manner that would be most impactful and inspiring to the viewer.

“We get the stories from them [SHG] and based on the tone/content of the story we run with that,” Bottoms describes. “’The First Kiss’ short was a really good pilot for us because we established our pipeline for making sure the series is consistent with the brand. It's all very collaborative and we all are able to be creative with it and have fun. We just want to make this series as good as it possibly can be.” The team relies on their collective experience in animation to overcome time constraints inherent in such productions. “You'd always like more time, but thanks to Toon Boom Harmony, we are able to really hone into Josh's great design sensibilities and use his layouts to have a visually compelling show,” Bottoms states. “As we produce more of these, we're learning each other's workflow and we're turning them out pretty quickly now.”

Every production has its own unique challenges; capturing an iconic personality such as Harvey in an authentic way that is satisfying to his existing audience, while building a new one, was no exception. Bottoms and Roberts tapped into the resources of Harvey’s team at SHG to become familiar with the online content and who it reaches. There they got the guidance needed to navigate and capture the essence of “Steve Harvey.”

While working on these shorts, the creative team developed a real sense of responsibility to the audience. “We hope they are entertained!” Bottoms concludes. “Steve is an incredible role model and inspiration; we just want to do him justice while hopefully making you laugh or feel inspired as well.”

“These stories are short, but they can make you laugh and inspire you,” Roberts added. “Steve is an amazing storyteller who knows how to captivate an audience. I can only hope that the animation can make audiences laugh harder and inspire them even more.”