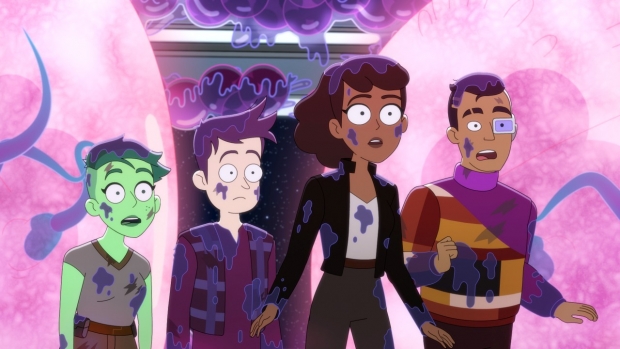 By his own admission, Mike McMahan loves what he does – which is a good thing because he does so much of it.

“I work every weekend,” he says. “I work all day, and sometimes I put my kids to bed and I work at night because I really, really believe in this stuff. And I really believe in the teams I work with. The hardest thing is emerging from my little animation hub in my house, this one little 15’ x 15’ room, and switching to being a husband and father. It's all about that balance, but I love making animated shows.”

Currently, McMahan is the primary creative force behind not one, but two adult animated sitcoms, Solar Opposites on Hulu, and the unlikely Star Trek spinoff Lower Decks, which launches its third season today on Paramount+. Star Trek: Lower Decks tells the story of the support crew serving on one of Starfleet’s least important ships, the U.S.S. Cerritos. Season 3, which kicks off with a shocking resolution of last season’s epic cliffhanger finale, boasts a new and resonant emphasis on character development; the show also boasts its first crossover, as characters from Lower Decks will meet up with the Starship Enterprise in an episode of the upcoming Season 2 of Star Trek: Strange New Worlds.

McMahan, who previously served as a writer and story editor on Rick and Morty, tore himself away from work long enough to talk about the third season of Lower Decks, and to reflect on what makes the series tick.

AWN: So, what's in store for Season 3? What do you want to share with everyone?

Mike McMahan: If you liked Seasons 1 and 2, you’ll love Season 3. It brings comedy, it brings amazing sci-fi adventures – well, small-stakes sci-fi adventures, which I think are even more fun than high stakes. You’ll see that our Lower Deckers are still the Lower Decks, but they're learning more about themselves, they're growing a little. And we get to go to Deep Space Nine, which just is surreal and amazing. AWN: From what I've seen, the animation is also looking bolder and brighter.

MM: I’ve got to hand it to the Titmouse team, especially [director] Barry Kelly and [art director] Nollan Obena. They are consistently pushing and giving me better than I asked for, in everything from backgrounds to character designs to the directing. They are such a joy to work with. And I also love working with Marisa Livingston, who bounces back and forth between being a director on Solar Opposites and the lead character designer on Lower Decks.

AWN: Last month, when we teased the upcoming Season 3 release, there was news of a Star Trek: Strange New Worlds crossover. Can you share anything else about that?

MM: My current line about that is that the Strange New Worlds Enterprise crew may have encountered a lot of strange worlds, but they've never encountered such strange new characters as the ones that come into their world from Lower Decks. It's very funny. I feel like they're better at navigating how to deal with aliens than they are at navigating how to deal with Mariner and Boiler. AWN: Does knowing that the animation team is getting better and better with what they can bring to the visuals allow you more freedom with story ideas?

MM: A little bit. We try to be respectful with the time and the bandwidth and the reuse. We want people to be able to do their best work and not have to reinvent the wheel every single time. So if we do a big episode, we think about how we can do the next episode with props and character designs and locations that may be a little bit more familiar, allow a little bit more reuse. But, at the same time, my team tends to reinforce my worst impulses, because I'll give them a big, crazy episode, and they’ll give me better than I expect, which kind of ups the ante.

But when we're breaking the episodes, it's like, did we go big last time? How much bandwidth can we have? Let's not throw in a bunch of crowd scenes for no reason. And so, from a bandwidth perspective, when we decide to go all out and do a lot of CG ships or whatever it is, it has to be worth it. It has to be meaningful from a character and story point of view. And I hope that the artists understand that when they are having to really bring it in an episode and go outside of what we've usually done, it’s for a good reason.

AWN: You've been involved in a huge amount of episodic animation in the last handful of years. Does it get easier with every episode? Do you ever worry about getting stale? How does that work creatively?

MM: I think I've gotten more comfortable with the idea that less complicated things can still be amazing. Especially during my years at Rick and Morty, I'd be obsessed with complexity and convinced that complexity rules. Like it's really fun and it's really fun to watch. But I've also found, especially making Lower Decks, that just spending time with these characters and watching them interacting is better than any big action sequence or anything we might be doing for shock value. Because I honestly think that, because we have respect for Star Trek, we've kind of invested in these characters. And it’s paying huge dividends, and doesn’t require giant battles. And then, when we do want to do a giant battle, or some other super trippy crazy stuff, it means more in that moment.

Also, we don't have that brutal production schedule that we used to have. Instead of 26 episodes, on Lower Decks, we have 10. On Solar Opposites, we have 11 and a special. So every episode has to kind of be this gem, because it’s so much fewer than what people usually get. So every episode, we have to talk about character. We have to talk about visuals. About what's going to surprise and delight people. There isn't an episode that goes out that doesn't at least have that kind of bedrock foundation. AWN: Have you been surprised at all with the direction the stories have taken this season?

MM: What's new for me is that the characters have grown so much. They’re going on paths that I hadn't distinctly planned out the first season. And it ended up with episodes I never imagined, which we got to do in a really fun way. And when I'm being surprised as creator, when it's not part of a rigid plan, that's when I start to rely on my artists and my voice actors and my editors. That's when the episodes start to feel more collaborative, and that just always feels better.

Also, with 20 episodes behind us, we don't have anything to prove anymore. We just get to make this show that we love. We don't have to be hearkening back as much to Star Trek. We get to just be Lower Decks, which has been really freeing.

A lot of the time with Rick and Morty, we would be like, “We should do a classic Rick and Morty episode next because we kind of broke the rules last episode.” And that was always the kiss of death – like, what is a classic episode of a thing we made? With Lower Decks, we don’t know what a classic Lower Decks is because we haven't really defined it yet. All we know is that we love these characters and we want it to feel like Star Trek. AWN: When we spoke before the Season 1 premiere, you said that, however funny it's going to be, it's not going to be a spoof. It's going to be respectful to this fantastic franchise. Has it been hard to stick to that?

MM: It's always about balance. It's always hard. And I think what feels good when you watch it is that we're never relaxing into one or the other – it’s an animated comedy, but it's also Star Trek. To me, that's what makes this show special. And it’s also so rare to get to do something like this, to approach a franchise and say, “Hey, I'm a comedy writer. I make alien jokes. Half of my characters throw up on themselves. But I want you to trust me to do something where that's not going to happen, where this show is going to be funny and inviting, and will appeal to an audience that might be brand new, or might have seen all almost thousand episodes of this franchise.”

But it's still a matter of going scene by scene. I'm always having to figure out how to dial in – does this have to be heart, does this have to be comedy? Does it have to be both? And I think the challenge of keeping it Star Trek and keeping it funny is that every officer is capable. How do we make capable, perfect Starfleet officers funny? That's the challenge of this show. And when we accomplish our goals in that respect, that's when it feels magic, that's when it feels like you're getting both at once. And that's what we're always striving for.