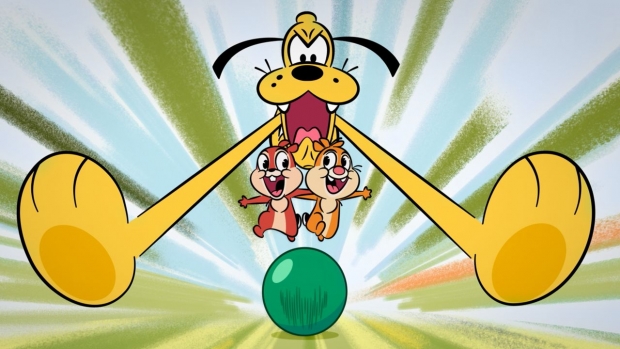 Directed by Jean Cayrol and executive produced / produced by Marc du Pontavice at the French studio, Xilam Animation, Chip 'n' Dale: Park Life is inspired by the classic Disney shorts from the 40s and 50s. Created by Bill Justice, the frenetic pair first officially appeared in the 1947 short, Chip an’ Dale, before going on to star in 24 cartoons alongside Mickey Mouse, Pluto, Donald Duck and other Disney characters. The also starred in a 1980s half-hour TV series, Chip ‘n’ Dale: Rescue Rangers, as heads of their own detective agency.

And now, the dynamic chipmunks are back, though they return sans voices, which perfectly serves the gag driven, slapstick humor of the series. In the new show, nervous worrier Chip and laid-back dreamer Dale make the perfect odd couple: they're best buddies, living together, and driving each other nuts. In their perpetual pursuit of acorns, these ultimate underdogs are joined by Pluto, Butch and other Disney characters as they face down bullies great and small.

Take a quick peak at a clip from the Title Sequence, and the series trailer:

According to Cayrol, though the new show is based on the old shorts, it takes the pair into the 21st century, giving them a brand-new identity. “We wrote the show on the memories we had of Chip ‘n’ Dale,” he says. “I didn't want to make a parody or imitation of what had already been done so well… so beautifully animated in the 40s. Everyone loves the old shorts. But we wanted to do something completely different. The only thing we wanted to stick with really was the 2D, hand-drawn animation kind of vibe.”

Xilam excels at non-verbal, 2D animated comedy. For the director, a long-time studio Xilam, it was the perfect project for the studio. “I've been working for Xilam Animation for almost 15 years, 10 years as a director now,” he shares. “Xilam is mostly known for 2D, slapsticky cartoon animation like Oggy and the Cockroaches, for example. Disney knew from the very beginning that they wanted to go with slapstick humor with Chip ‘n’ Dale. So, they came to us.”

“I come from a very, very traditional animation background, starting back in the 90s when we didn’t have Flash or other CG tools,” he continues. “We had paper and pencils, that kind of stuff. When they told me they wanted to go 2D hand-drawn, we were so happy. On this series, even though we use computers, not paper, it's still hand-drawn. Every animation key pose is hand-drawn. We didn't use any puppets or that cutout, flashy, stiff kind of material. Everything was hand-drawn, like the old way. It was a blast for me to know I was about to work on Chip ‘n’ Dale for Disney in 2D. That was great. We fully embraced that. And honestly, Disney was right from the beginning to go into that direction because when you do slapstick cartoons, you don't want to be constrained by stiff CGI models. You want to go crazy. You want to stretch your characters. You want that organic feeling that only 2D animation can give you.” Regarding the show’s voices, or lack of voices, Cayrol explains, “It was tough at first because I'm a writer, and for a writer, you tell a story with language, right? In the writer’s room, we speak. So, at first, it was difficult, or at least, we thought it was going to be difficult. But we soon realized that Chip and Dale being who they are, they possess such super pure emotions. When they're scared, or happy, or super joyful, even selfish, using 2D hand-drawn animation made it super easy to get straight to the point with the posing and expressions. Also, we had two fantastic voice actors that pretty much invented a chipmunk language just for us. We were really, really inspired listening to their voices while producing the animation. So, in the end, it wasn't really a problem.”

With series production beginning in 2019, prior to the COVID-19 lockdown, Cayrol and his team started work in an actual writers’ room. “We had whiteboards all over the place, so I was able to doodle during the story workshops,” he reveals. “And pretty early on, we’d know if something was going to work or not based on those first drawings. Some episodes actually derived from a single small doodle that made us laugh. Drawing was heavily involved in the very early stages of production. Then, of course, you move onto storyboards, and that's when you go crazy, trying to do stuff as innovative as possible.”

Ideas came from everywhere, though most often, from stories the writing team would tell each other about things happening in their everyday lives. “We really wanted the audience to relate as much as possible to Chip and Dale,” he notes. “And in our version, the two are now living together and well, when you share private space with someone, you often have small, domestic problems to deal with.  Many great ideas were coming from our own personal experiences. Sometimes a writer would tell a story about what had happened to them earlier in the week, or on the train that morning. We’d turn that into a Chip ‘n’ Dale story, which makes the show so relatable for us and an audience.” Like so many shows impacted by the lockdown, much of the production was done remotely. “Obviously, the last year, not being able to sit with the team was difficult,” Cayrol says. “Our team worked so well, technically, that we barely felt we were at home. Everything went smoothly. But what I've really, really missed is the energy. We had a full year to work together between Xilam and Disney, with the team together in the same room, to have some laughs, to share some lunch, to enjoy some great times and feel that energy, that joy, of working on Chip ‘n’ Dale. But even working remotely, it’s been a great experience and we’re really happy with the show.”