EPs Marc Ceccarelli and Vincent Waller discuss the long awaited, multidimensional tale of comedy and caution, satire and stupidity, premiering January 13 on Nickelodeon with encores through the weekend. 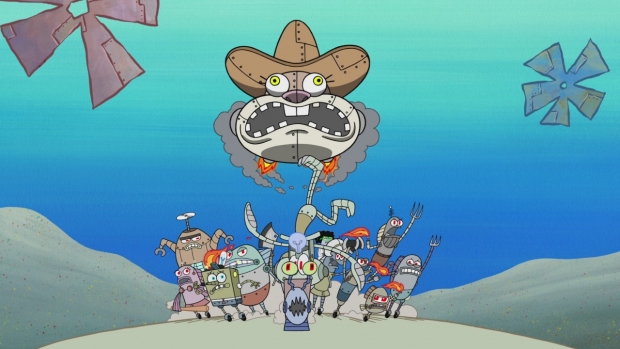 For a series that’s remained the most-watched animated show literally almost every year for nearly two decades, some might say that a crossover is long overdue for the SpongeBob SquarePants universe. Though creator Stephen Hillenburg, who passed away back in 2018, was always vehemently against crossing SpongeBob with other shows, current executive producers Marc Ceccarelli and Vincent Waller have managed to find a loophole.

“We've had fans clamoring for crossovers for years, but Steve was like, ‘I'm not crossing over with any other shows,’” remembers Waller. “But then we thought, ‘Well, what if it was all within the wheelhouse? We could do this and have fun doing it.’”

SpongeBob SquarePants Presents The Tidal Zone, Bikini Bottom’s first-ever crossover, is a one-hour-long special that brings together three animated series within the SpongeBob universe: SpongeBob SquarePants, The Patrick Star Show, and the Paramount+ original series Kamp Koral: SpongeBob’s Under Years. The multi-dimensional adventure follows GrandPat from The Patrick Star Show as he makes his way through the bizarre happenings of each dimension. “Our shows are already weird, and the whole idea of The Tidal Zone is an excuse for us to get even weirder,” notes Ceccarelli. “It removes the shackles and the rules and lets us be even more scattered with our creativity.”

“Character-based comedy is the SpongeBob universe’s secret weapon,” says Ceccarelli. “Over these years, we've developed such a great cast of characters with a great pool of different personalities that are really well-developed. It gives us a lot to pull from because all the stories come out of the characters. Steve and the original crew built up this really cool toy box full of all these different toys that, when you put certain toys together, it'll create its own story.”

SpongeBob has always offered a vast ocean (pun intended) of organic and original storytelling through its diverse characters and wide world under the sea.

“Steve was coming from indie cartooning and wasn’t about crunching the numbers on what makes a successful show,” explains Waller. “So, when it came to style, Steve was all over the map. As far as what the characters were going to look like, it was about ‘whatever's fun, and whatever's cool.’” And this included the design of the main characters as the show progressed and changed. Characters were never confined to one look, or even one form of matter. They could shapeshift and morph to fit whatever story wanted to be told. It made coming up with new material easy, especially when continuity is thrown out the window.

“The truth is, we never really thought about continuity much on the show,” shares Ceccarelli. “It was something we always saw as the ‘enemy of creativity.’ Now, we have been thinking about that stuff more and more, but mostly so we can twist and mess with canon, more than trying to follow it.”

Of course, the multimedia and hybrid animated special – filled with 2D, 3D/CG, live action, and photo cut-and-paste stop-motion – wasn’t without its own challenges.

“The Binary Bottom segment was probably one of the heavier lifts for us because we can only do a certain amount of designs per show, because of our pipeline,” says Ceccarelli, referring to a portion of the crossover where all of Bikini Bottom and its residence turn bionic.

“And we don't want to kill our crews,” adds Waller. Ceccarelli continues, “When you do a segment like that, where everything is redesigned, the whole landscape, from the ground up, with so many assets needing to be redone, we had to make room for that in our production pipeline. But the studio tends to give us a little more room to play around. So, we take advantage of that and run with it.”

Funnily enough, combining three different series into one special episode didn’t mess with the production pipeline at all, since all three shows have been in production simultaneously with the same group of writers and staff since they first began development.

“We're already combining them all every day,” says Ceccarelli, referring to SpongeBob SquarePants, The Patrick Star Show, and Kamp Koral: SpongeBob’s Under Years, each of which he and Waller executive produce. “Our days consist of back-to-back meetings for all three different shows. And each week we spend a good amount of time with our writers writing these episodes. We’re immersed in all three all the time. To actually make an episode that combines them all wasn't that big of a lift for us. It was more like making manifest what happens behind the scenes.” While The Patrick Star Show is a 2D series starring Patrick and his eclectic family, Kamp Koral is a 3D animated series with the original SpongeBob characters reimagined as children. These series, which launched in 2021, and the original SpongeBob show, which first aired in 1999, are tied together, as Waller puts it, by the “connective tissue” of the live-action narrator present in all three dimensions of the special.

Most of the work done to insert the live-action French Narrator into the animated segments was done by Nickelodeon’s digital crew, headed by CG Animation Director Christian Evans.

“Chris works on all the shows and already does that piecemeal work for each of the different shows whenever we need some sort of special, weird cutaway to something live-action, photo collage, or photo animation,” says Ceccarelli. “So having him be the one holding the needle and thread, putting the pieces together, was a natural sort of progression.” As Waller and Ceccarelli look forward to the release of SpongeBob SquarePants Presents The Tidal Zone, a historical moment for the franchise that consists of not only three TV series but also three films, the producers also find themselves looking back at their many years with SpongeBob and the gang. And, despite the success of Hillenburg’s comedic world, they admit to still being shocked that new content continues to be made.

“Animation has always been transitory and transient,” says Waller. “Three years was a long time on a job way back when and I never thought that 22 years later, we’d still be here.”

But, in two decades, the enthusiasm for the characters they bring to life and the stories they craft from the Hillenburg toy box has never wavered and, in fact, was rejuvenated with the new opportunities the crossover presented.

“I just hope everybody enjoys this special because we enjoyed making it,” Ceccarelli concludes. “Anytime we get to have an excuse to be weirder, we enjoy it. So, we hope the audience can feel that extra enjoyment that we're having.”

Choc Chip Animation Riffs on Pop Culture in ‘The Art of Murder’
F is for Flake: The (Not So) Great Animation Robbery?
Re-VIEW: ‘Avatar: The Way of Water’ – A Miraculous Vision
‘Kung Fu Panda: The Dragon Knight’ Celebrates a Special Lunar New Year
END_OF_DOCUMENT_TOKEN_TO_BE_REPLACED