‘Spirit Untamed’ Recaptures the ‘Spirit’ of the Cimarron

Opening in theaters June 4, director Elaine Bogan and DreamWorks Animation’s next entry in the film and TV franchise uses CG to beautifully capture both the majestic splendor of the American frontier and the emotional bond between a headstrong girl and a wild stallion. 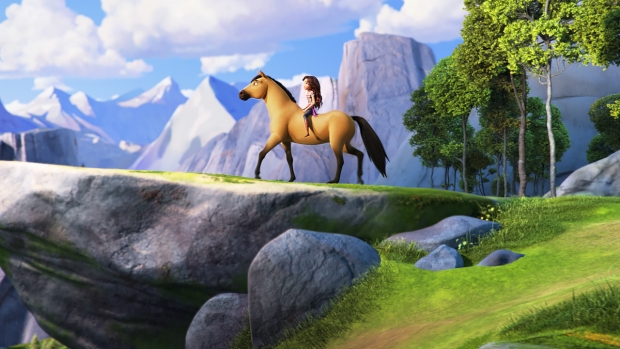 It’s a familiar scene -- a dun-colored stallion, dark mane flying in the wind, races mightily with his herd across the western frontier, the horizon behind them ringed with snow-capped mountains, their hooves beating as many, and their hearts beating as one.

Almost 20 years after the 2002 release of Academy Award-nominated and Annie-Award winning Spirit: Stallion of the Cimarron, Spirit Untamed makes its grand entrance as the next chapter in the Spirit film universe. This time brought to life in CG, the new DreamWorks Animation feature recaptures the “spirit” of the cimarron, showcasing deep, rust-red canyons, vast green valleys, and richly painted sunsets.

The film releases into theaters Friday, June 4 and is dedicated to the original Spirit film’s late director, Kelly Asbury, who sadly passed away last summer. “We felt it right to honor and dedicate it to somebody who gave so much to creating the world that we were working with,” says Elaine Bogan, who co-directed Spirit Untamed with Apocalipso’s Ennio Torresan. “That was important to us. We all loved Kelly, and a huge part of our goal was to create a story that felt familiar, like it belonged in the Spirit world, but was also brand new and brought something fresh to the audience -- both the audience that loves the existing properties and a brand new audience.”

The Spirit Untamed story traces back to the 2017 pilot episode of the 8-season TV series, Spirit Riding Free, taking a deeper, more emotional dive into the main character, Lucky (Isabela Merced), who has just moved to the fictional frontier town of Miradero, reuniting with her father (Jake Gyllenhaal) who she hasn’t seen since she was a baby. Though Lucky has never ridden a horse in her life, the town raves about Lucky’s family legacy, as her mother was a famous local horse-riding stunt performer. And when Lucky finds herself face-to-face with an unbreakable wild stallion, who she names “Spirit,” she begins to feel something stir in her own heart.

“It’s very much its own standalone film, but very heavily influenced by the setting and cast of characters from Spirit Riding Free, and the horse in this film is said to be the next generation in the Spirit lineage,” explains Bogan, known for her directorial work on Trollhunters: Tales of Arcadia. “We wanted to take a more cinematic dive into the emotion and drama of family relationships, the theme of being who you are, and having big, wide open adventures with landscapes that would hit the big screen in a super exciting way.”

While Asbury’s original 2D film was recognized for its passionate dive into a sensitive and mature narrative, the film’s aesthetics are also some of the most renowned in DreamWorks’ film history, and Spirit Untamed is no exception in its emphasis on environment, utilizing to the fullest the realism of CG animation.

“We wanted the environments in this movie to speak to a global audience,” explains Bogan. “My production designer, Paul Duncan, and I first started out drooling all over each other's vacation photos from national parks across America, Europe and Britain. He comes from Ireland, so he has a lot of European influence as well in his design.”

She continues, “Our goal was to make it feel like these environments could potentially exist outside any audience member’s back door, and that adventure was right there waiting for them. Hopefully, the environments speak to a diverse audience, so they feel like their adventure is possible.”

The 19th century American frontier scenery ranges from dusty deserts, jagged mountains, and flower fields to salt flats, coastal harbors, and foggy forests, bringing a diverse, expansive mix to the film. Notes Bogan, “We approached many things in that way, like the character designs, the costume designs… everything had a bit of that mix in it, which made it feel like something I'd never worked on before.

Bogan notes the project was also unique for her in how much animation was used to narrate an unspoken connection between characters. Though Matt Damon’s voice explained the original Spirit’s thoughts and emotions in the first film, there’s no such audible assistance in Spirit Untamed, and it was both a challenge to the team and, according to Bogan, an acknowledgment of the true power of animation.

“I feel like the story between Lucky and Spirit became a very visual one and, more than any other project I've worked on, this movie has more scenes in it with no dialogue at all between the two main characters,” Bogan shares. “That definitely was one of the biggest challenges, especially when writing the script, where Spirit couldn't have words to express the emotional and physical journey he was going through. The only way we could express that was by his body language and expressions.”

The director used her own experience as a long-time horse-rider to bring an authenticity to the animation of Spirit’s noticeably changing facial expressions and hoof stomps, as well as the more subtle eye shifts, snorts, and other body movements. “My life with horses has had an impact on so many parts of this story,” says Bogan. “My horse Ziggy has been such an inspiration for the character through the making of this movie, and I pulled from my relationship with him when thinking about how the horses move and would be animated, and how they behave with each other and with humans. Also, how goofy and playful they can be.”

She adds, “It was really fun inserting little doses of reality when hanging out with horses, like getting your face snorted on with horse spit. That happens on a regular basis with Ziggy and I.”

But Bogan says the biggest animated aid was Spirit’s reaction to Lucky, specifically moments of calm always featuring the warm western sunrise and sunset between the two characters, as well as close-up camera shots of their own little dance of trust, whether in the small-town stables or on the edge of a mountain. “Footsteps are a very big visual theme that recurs in our movie,” Bogan reveals. “Lucky's learning, ‘If I step forward too fast, he'll take a step back,’ or ‘If he takes a step forward, it means he's getting more comfortable.’ And that became a strong storytelling device we leaned on, hoping it would help the audience come along on the emotional journey with these two.”

Though taking on the role of a first-time feature film director is one Bogan likens to nervously walking up to a 1,200-pound animal and asking for a ride, she also says it’s been immensely rewarding. “A lot of this movie is about Lucky going through this journey and trying to learn how to communicate with another being that doesn't speak, and that's the magic of animation for me,” she says. “It’s about being able to tell a visual story without needing a whole bunch of dialogue or conversation, understanding what these characters are thinking and feeling with a simple movement, a tail flick, a head toss, or using the scenery around them.”

And Bogan hopes that the visuals in Spirit Untamed ignite the adventurous spirit in viewers, whether they’re adults revisiting this magical, wild world from their childhood, or young kids experiencing it for the first time. She feels a horse-driven adventure is long overdue after this past year in isolation. “It’s releasing at a time where it's going to appeal to a lot of people who have been holed up in their living rooms for a long time, yearning to get back out there,” she says. “I hope this movie provides a little bit of an escape and empowers a young audience to think about trying to find the courage to be your authentic self and use your authentic voice and rely on the support and the love of the friends and family around you in order to achieve what you might think is impossible.”

Choc Chip Animation Riffs on Pop Culture in ‘The Art of Murder’
F is for Flake: The (Not So) Great Animation Robbery?
Re-VIEW: ‘Avatar: The Way of Water’ – A Miraculous Vision
‘Kung Fu Panda: The Dragon Knight’ Celebrates a Special Lunar New Year
END_OF_DOCUMENT_TOKEN_TO_BE_REPLACED