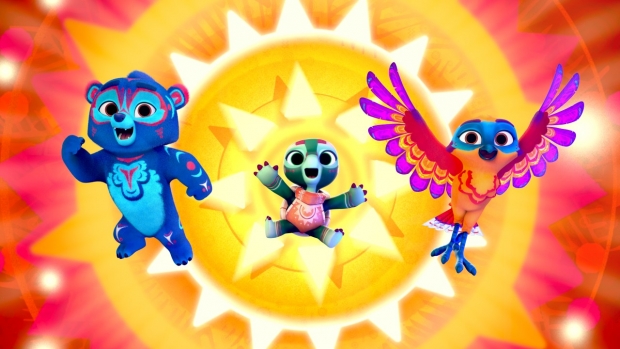 On this Indigenous Peoples’ Day, Samala Chumash tribal member and the first California Native American showrunner Karissa Valencia invites audiences on an adventure that explores the beauty of nature, community, and her rich storytelling culture.

“I've gotten to see the characters I always wish I’d gotten to see as a little kid, see us as superheroes with our magic, and celebrate our culture and not be ashamed of it, not hide about it… and see us exist in the modern space,” says Valencia, creator of Netflix’s all-new animated kids’ series, Spirit Rangers, which releases today, October 10. “That gets me really emotional,” she adds. “The show has healed my inner child.”

Spirit Rangers explores the beauty of nature through the eyes and adventures of half-Chumash, half-Cowlitz siblings Kodi, Summer, and Eddy Skycedar, who all share a secret. They are “Spirit Rangers” who help protect the land and spirits of the national park they call home in California. Taking on new perspectives as a grizzly bear cub, red-tailed hawk, and spunky turtle, the Skycedar kids face every challenge — from helping a lost thunderbird to waking a sleepy sun — with courage and compassion.

The stories derive from the tales Valencia heard every day growing up on the Santa Ynez reservation in Santa Barbara.

“My dad and my tribe would always tell our traditional stories of, like, how the Condor got its black feathers, how the coyote and lizard made the first humans, all the origin stories of our animals and land in southern California, and I've always loved those stories,” says Valencia, whose Chumash people come from the central and southern coastal regions of California and consider “all things to be, in varying measure, alive, intelligent, dangerous, and sacred." The series is executive produced by Peabody, Emmy, and Humanitas Prize winner Chris Nee and her studio, Laughing Wild, the creative force behind other diversity-driven, curiosity-conscious, and Earth-engaging kids' shows like Ada Twist, Scientist and Ridley Jones.

“My time working with Chris, who also created Doc McStuffins and Vampirina, seeing how she approached the preschool space, was when it really clicked for me that ‘spirit rangers’ would be great in a preschool show,” remembers Valencia. “Seeing how she respects that audience and could tackle stories about cancer, but also showing goofy and funny characters all in one sweet, compact story, it was inspiring to me as a show creator.”

That careful and intentional touch proved necessary on Spirit Rangers, as Valencia describes the stories she heard as a kid to be “very Grimm’s Fairy Tales.” “Some of them are kind of spooky, and some are not appropriate for preschoolers,” she admits. “But we've adapted them in the series.”

The history of Native Americans is also not always a warm topic to approach, filled with war, genocide, racism, and desecration. But Valencia isn’t shying away from the tough topics in her series – they’re just placing them in a kid-friendly light.

“We have one episode about mascots where the kids have to navigate that conversation of telling somebody, ‘We're still here. You can't make a caricature of us,’” explains Valencia. “We also tackle breaking a promise and, in our episode, we call it a ‘treaty,’ because that was something that signifies past treaties that have been broken 10 times over. But, in Spirit Rangers, because it’s steeped in animal lore, the treaty is spelled “treety” because it’s a promise between birds.”

Valencia and her team of writers, many of whom come from Native tribes themselves, are working on a Thanksgiving episode, which Valencia calls “a labor of love,” because of how much the creator has invited community involvement to make sure every episode and its corresponding topic are tended to with immense care.

“A lot of these tribes have never been invited into the production process, but it was an adjustment at the beginning,” notes Valencia. “I knew that I wanted to indigenize our production by inviting all these tribes in, but they do not adhere to our production schedule, so I had to make time appear out of thin air so we could have them in the process, because it was so important to me.”

She continues, “Even when we were making our underscore, we had an indigenous composer, a native Hawaiian named Jordan, who had this idea of recording the voices from my tribe, rather than using a temp library for Native voices. Now those community singers’ voices are in the show, and it's made it that much stronger.”

Another challenge was sending an entire recording studio all the way to South Dakota so that actor Wacinyeya Iwasaka Yracheta, who voices for the character Kodiak (or “Kodi”), could play the role.

“I really wanted him, but he was so far from any studio of any kind,” says Valencia. “But Netflix was great and didn't say, ‘Pick somebody else.’ They were like, ‘Let's problem solve.’ Because we just can't find Native kids in LA yet. They're just not everywhere yet. They will be one day but, for now, we have to create that opportunity.” One of the biggest hurdles the Spirit Rangers team tackled, that was also one of the most important to Valencia, was getting design and building materials culturally accurate in all aspects of the show, down to the tiniest feature.

“The kids, when they transform, they use their necklaces to help them, and each of the necklaces – bless you Superprod for getting all the detail right – are made from California materials,” notes Valencia. “So, each of the kids has an abalone shell in the shape of what their animal is. Kodi has the red abalone shell, Summer has a white one, and then Eddie has a green one. Having the kids wearing their necklaces, jewelry that is very Chumash, is so cool to see in the modern space.”

Tribal authenticity also went into the design of the animal spirits, of which there are many to represent the many Native tribes in the states, and around the world.

“The spirits have tribal prints on them, and each of the prints is specifically from whatever region they're from,” explains Valencia. “So, Coyote and Lizard have all these rock art designs on them, and those are pulled directly from the Chumash cave paintings in Santa Barbara. It was cool to get permission from the tribe to adapt the symbols. So, if we meet a spirit from New Zealand, the Māori designs will be on that spirit, or the Ojibwe spirit will have a floral print on them.” With multiple tribes represented in the show, it was an ambitious first for Laughing Wild.

“Dr. Joely Proudfit, who was our Native production consultant, she had this idea of making the Skycedar kids multi-tribal, because then, design-wise, we can show the kids with different skin tones and eye colors. So, Joey Clift asked his tribe for permission to base the family on the Cowlitz as well and they, of course, said yes and have been amazing collaborators ever since. And then the writers' room came in and brought their own stories with them, of the different regions they came from. It’s been cool to show off how different all these tribes are just based on how these spirits look. We're not a monolith.”

One of the most challenging designs on the show, and at the same time, one of the most rewarding, is the Skycedar siblings’ treehouse.

“That was a fun one because it's inspired by a traditional Chumash house called an ‘ap,” says Valencia. “It's made from tule reeds and willow branches, and it's in this dome shape. But they still have blankets and bean bags and coloring on the floor because I didn't want it to feel like they were living in a museum. They're still modern, Native kids. I'm hoping there's going to be a Spirit Rangers art book one day just because of how Superprod has gone above and beyond on getting those details correct. It is so impressive how much they care.”

Valencia’s family has been moved by the show’s attention to detail as well, especially after Valencia showed them a specific portrait located in the visitor center in the show’s ranger station. “It’s a portrait of Maria Solares, who is my ancestor and is in all the Chumash textbooks because she's the one who helped preserve our language and all these stories that I'm telling in the show,” she reveals. “Her picture even made our consultant burst into tears.” For Valencia, Spirit Rangers’ release also marks an important moment in her own career, as the first time she’s seen mystic, Native American stories being told to young audiences in animation since Brother Bear and Pocahontas.

“All I had growing up was Pocahontas, who I did love,” notes Valencia. “I’m a 90s baby through and through and I met her at our powwow one year and had Irene Bedard sign my DVD. Then, growing up and realizing what the source material was, I was like, ‘Oh gosh, we need more natives behind the scenes to really tell our stories.’”

She continues, “I think we're coming off the heels of Molly of Denali on PBS, but that really focuses on Alaskan culture, which is beautifully done, and I love that show. But my personal style and taste is fantasy, supernatural superhero stuff. So, when I think about being a kid, looking for my heroes, wondering, ‘Who do I want to dress up for Halloween as?’ it is exciting to me that now Spirit Rangers is out in the world. We can be those heroes and we can also be those preschoolers’ friends that they want to hang out with. It’s going to be such a change.”

Seeing herself represented not only as somebody from the Chumash tribe but also as someone who was once a little girl that would have loved to see herself represented more on screen, Valencia hopes Spirit Rangers offers a welcoming look into Indigenous culture for both Native and non-Native kids, gives a fun and authentic voice to her community and provides and new perspective of the natural world and the spirits that inhabit it. “I am excited to invite people into our indigenous world and see us exist in the modern space,” she shares. “I'm also hoping that this can be a love letter to national parks and our Earth and taking care of it. The story of Coyote and Lizard were my favorites growing up and to have them both there on the show, watching over the kids on every adventure, it makes me so happy because that's probably what they're doing out there right now, running around Santa Barbara, watching over us and taking care of their land.”

She concludes, “I'm hopeful that the next generation of kids is super appreciative of our land and looks up what tribal land they're on and wonders what spirit would be there. And maybe the next time you want to kick that rock or squish that spider, you'll think twice.”

Taking an Old-School VFX Approach in ‘All Quiet on the Western Front’
‘Natural Habitat Shorts’: Like ‘Ranger Rick,’ But for Adults
Framestore Sets Sail on ‘1899’ with New Virtual Production Tools
Animated Characters: The Art of Babbitt – Part 1
Bruce Smith and Ralph Farquhar Talk ‘The Proud Family: Louder and Prouder’ Season 2
VFX is the ‘Thing’ for Tom Turnbull on Tim Burton’s ‘Wednesday’
We Need to Chat
F is for Flake: The (Not So) Great Animation Robbery?
END_OF_DOCUMENT_TOKEN_TO_BE_REPLACED