The Spirit of Bakshi Returns in ‘The Spine of Night’ 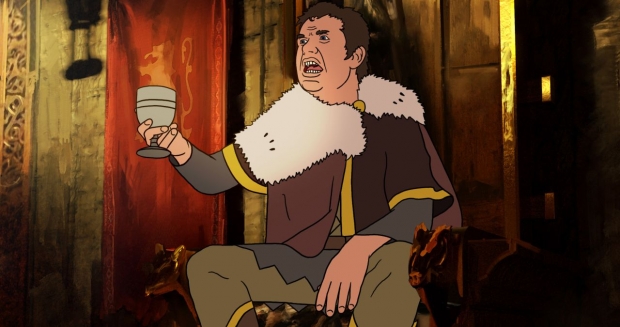 Premiering last week at the SXSW festival, Philip Gelatt and Morgan Galen King’s raucous, epic 2D fantasy, The Spine of Night, harkens back to the grand old days when animated features released in U.S. theatres pretty much came in two flavors: Disney and Bakshi. Those of us who grew up with (or otherwise came to appreciate) Ralph Bakshi’s iconic films like The Lord of the Rings and Wizards understand that visceral, almost surreal feel to his rotoscoped animation, oddly grounded in human reality and soooo different from the banality of Saturday morning cartoons or the regal, hand-drawn beauty of the Disney world. Watching Fire and Ice on the big screen during a particularly inspired weekend college bender is a memory I’ll always cherish. Enjoying these adult “cartoon” films felt so coolly subversive. You knew you were pissing off your parents by spending an allowance they’d given you for a ticket and tub of corn to sit back and delight in a film much of society felt would damn you to hell. It was like Footloose for Orcs.

Which brings us back to The Spine of Night. The film tells the story of an ambitious young man who many years ago steals forbidden knowledge from a sacred plant and, as he falls to its darker temptations, unleashes ages of suffering onto mankind. As his power grows over the years, it falls upon heroes from different eras and cultures to fight back. There are many who stand against him; among them are a daring tomb-robber, star-crossed lovers, a maniacal necromancer, winged assassins, and an undying guardian. Will humanity be saved?

Written and directed by Gelatt and Galen King, the film’s voice cast includes Richard E. Grant, Lucy Lawless, Patton Oswalt, Betty Gabriel, and Joe Manganiello. A true passion project seven years in the making, The Spine of Night is a violent tale of sinister, dark magic, with the fate of mankind at stake… epic battles, metal slicing through flesh, lots of blood, Patton Oswalt talking middle-Earthean… what more could you ask for?

I had a chance to speak with Gelatt and Galen King right before the film’s premiere. They talked at length about their creative decision-making and production efforts that centered around the painstaking, hugely challenging rotoscoping process so crucial to the look and feel of the film.

First, take a look at the trailer:

Morgan Galen King: From its inception, I thought of it as a film for the two of us. It was our film, and we were the audience of two. I've wanted more of these sorts of films in the world since I saw Bakshi’s films when I was a kid. So, I've always operated on the Field of Dreams principle that, if we make it, the audience will find us. I know they're out there, at least I presume so, so hopefully, it’ll get to them.

Philip Gelatt: It's an incredibly good question. It will be somewhat difficult to find the film’s audience, but I also know the Bakshi feel, this particular feel of animation and fantasy, it’s relatively rare. My hope is that the film’s uniqueness, presented to a broad mainstream audience, as broad an audience as possible… there are people who will gravitate towards it and think to themselves, “Oh, this is a different sort of animated fantasy film than I've seen before.” Our hope is that we pull fans from that broader animation audience.

DS: What may work in your favor is the growing popularity of horror fantasy anime that parallels your work in some ways. Animation fans are obviously interested in that type of storytelling. Talk about your decision to use the Bakshi-style rotoscoping to make the film.

MGK: The intention was to evoke the feel of rotoscope films that I love from the late 70s and early 80s. As part of that aesthetic consideration, if you're trying to capture that look, to get the vibe of the film we wanted, you almost have no choice. Rotoscope animation is certainly a slower process than a lot of other animation forms. In other forms of animation, to tell an adult story, you don't have to make everyone look like a human adult. But, if you're going to have a fantastical setting, having it grounded in the recognizable human form, with recognizable physical human limitations, rotoscoping is what gave all those older films a lot of gravity and weight that I just really appreciate. DS: So how did you make this film? Rotoscoping is one thing but making a live-action film you then rotoscope is another.

MGK: [Speaking to Philip] Why don’t you start with the warehouse.

PG: So, when we set out to make this, Morgan had already sort of developed his own rotoscope style, reverse engineering it from watching behind-the-scenes footage of Bakshi’s warehouse and other stuff like that. That's sort of where the style started. He’d made a short film called Exordium [2013] that I had seen and loved. So, I approached him about doing something else. When we then set out to make The Spine of Night, the first consideration was, we need a warehouse, and we need to put people in that warehouse wearing costumes that are rotoscope appropriate. So, we got a warehouse, and Morgan did character designs, designs of human faces, as well as costume designs, because a lot of what we needed in that warehouse, the shapes we needed, would go into the final animation.

And then we shot a live-action version of the whole movie and cut it together; it was a very funny to watch live-action version of the movie. Utterly incomprehensible to anybody other than us. We showed it to some people, and they were like, “Yeah, I don't know what this is.” But it was totally clear to us. Like, “That’s a flower there. Can't you tell that piece of wood on the ground is a flower?”

Once we had that cut together, it got carted over to Morgan, who started the animation production. And, over many years, with a small team of people who could do this style of animation, piece by piece, we made the film. DS: How close to your live-action cut is the final animated film?

MGK: It sort of depends; it’s almost on a shot-to-shot basis. For long dialogue sequences, that was animated very accurately. But like in the last chapter, where there are a lot of sequences with people flying in wingsuits, we just had a lot of vague reference footage of people laying on the ground, flapping around. So, there wasn’t a one-to-one translation to animation, much less than any of the special effects stuff.

Every single frame in the film is fully animated. Even if you look at Bakshi’s stuff, like Fire and Ice, because he comes from such a traditional cartooning background, you can see a lot of those techniques at play, like where the foreground characters are fully animated, but the background characters freeze until it's their time to perform an action. That’s one of the things that, for me, can be a little jarring with rotoscoping… that thing which obviously he did because it's very cost-effective and time effective. Which we weren’t. So, on The Spine of Night, everything is fully animated. Every single frame. In terms of keyframing, I would draw the initial style frame, then give it to an artist on our team. The cut film sort of acts as a check on where you're at. It often got to the point where we hardly used the video reference at all, because we were still doing traditional onion skins. Frame-by-frame from the key.

DS: How long did this film take to make? How long to write, to shoot and cut the warehouse material, and then to animate the film?

MGK: We started writing in January 2014, maybe the previous December, and were filming by the end of March. Editing was maybe the next two months.

PG: Editing was a little bit longer. I think we didn’t really get started on animation until July of that year. 2014. PG: Almost exactly seven years. At the end of this month, it will have been seven years since we started the cameras rolling in the warehouse.

DS: A seven-year passion project! That’s incredible. What made the animation so time consuming? What were the big challenges?

MGK: The biggest challenge definitely was getting a team trained to do the animation, who could pull off the exact look I was hoping for. There's a lot of different approaches to rotoscoping, and some people had much looser styles than I liked. Our film is keyframe and onion skin based. It was also a challenge finding people who wanted the job, because it's extremely tedious work in a lot of ways. You must sit down and put in 10, maybe 12-hour days to get it all done. So, the alchemy of finding animators who wanted to and could do the work was a slower process than I thought. A harder process for sure.

PG: Everything creatively was almost a dream. We worked very well together. The script was easy, the shooting was easy, but as Morgan said, it was a bit of a shock in how hard it was to find and put together a team that could get the animation done quickly. That was definitely the biggest challenge. And that took seven years.

DS: At the height of production, how big was the team?

MGK: Roughly, at peak, I'd say we had four full-time animators - me plus three - and usually one or two colorists. The animators did line work primarily. Plus, probably two or three background painters working at a time. So, it was a small team. DS: So, what are the plans for the film from here on out? You’re premiering at SXSW. I assume you’re shopping the film or shopping for a distributor?

PG: We don't have a distributor yet. We're “for sale,” as they say at SXSW. We're hoping to find a distributor relatively quickly. Then we’ll have a real answer to your question about how we’ll find an audience. Or not. We'll let you know.

DS: Last question. After seven years, is The Spine of Night the film you envisioned when you started this production? Did you make the film you hoped to make?

MGK: It's exceeded my wildest expectations, honestly. It's completely uncompromised, you know what I mean? We had to make smart editing decisions for a time as the process wore on, but I think it just made the film tighter. It’s as close to what we dreamed of as it could possibly be.