‘The Spine of Night’: Redefining Fantasy and Animated Filmmaking

Philip Gelatt and Morgan Galen King resurrect an older, rotoscoped animation aesthetic, blending it with a blast of new creative storytelling and visual design energy in their epic, bloody, ‘swords and sorcerers’ tale about humanity’s battle between good and evil. 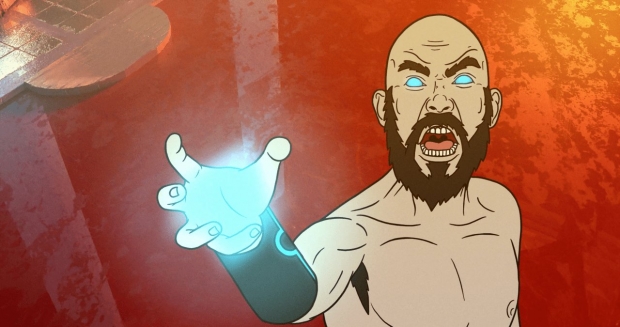 Despite what’s been written in reviews, writer and director Morgan Galen King says The Spine of Night is not aimed for geek nostalgia, but rather a chance to use old-school aesthetics and methods to create an entirely new kind of story.

“Certainly, my affection for the aesthetic is rooted in the past, but we wanted to resurrect the look of that old form in order to do something new with it, that casts off or confronts a lot of the trappings of the past that the [fantasy] form never really evolved beyond,” says King. “As much as I love the fantasy of the late 1970s, it’s so dedicated to recapturing the feeling of the 1930s pulp fantasy – Robert Howard’s Conan, specifically – that it can be pretty retrograde, in a lot of ways. I think we all wanted to bring it forward into modernity and challenge that legacy, rather than just revisiting it.”

The Spine of Night, co-directed by King and Love, Death & Robots’ Philip Gelatt, is a vibrant and violent 2D feature film viewing experience that begins with a jungle swamp’s high priestess braving snowy mountains to track down a magical, blue-flamed plant. Upon reaching her destination, the priestess recounts her arduous journey to the guardian of the flower and tells a story of how a single spore from this powerful plant has changed the world to one of corruption, greed, and hate through its influence over empires and black magic. When a young wizard rises to evil power, a series of heroes emerge in an attempt to restore humanity.

Inspired by the world of King’s previous short films – Mongrel, Mongrel & The Wrath of the Ape King and Exordium – The Spine of Night is produced by Gorgonaut and Reno Productions and was first released in U.S theaters this past October; the film is now available on VOD in the U.S. and will be released globally on DVD beginning Tuesday, February 1. The movie is one of 26 eligible animated feature films in consideration at this year’s Academy Awards. “Seven years is, by far, the longest and hardest I’ve ever worked on anything, and I think it’s astounding that we were able to do it with such a small team,” says King, who created the entire film in hand-drawn, rotoscope animation, working with just three other animators at a time. “Rotoscoping has a long history in adult-oriented animation, and we used it for the same reason that I think it was the preferred choice for so many others, and that’s because the grounded physical form of the human body lends itself to adult drama, eroticism, and violence in a way that more abstracted styles don’t.”

The term “rotoscope” has taken on a lot of different meanings over the years but, for the team behind The Spine of Night, it meant animating by hand based directly on live-action footage they filmed. King says their main goal was to have animated characters that move and express themselves like humans, as opposed to the “rubbery exaggerations you’d find in most cartooning,” along with enhancing the personality each actor brought to the characters in the live-action rendition.

The film’s combination of flat-shaded characters with painterly backgrounds is also a nod to the visual style that Ralph Bakshi used in Fire & Ice as well as his version of The Lord of the Rings, which had animation teams 20 times the size of King’s. But, despite the fact that fewer animators than expected showed interest in creating a rotoscope feature-length film, King was determined to see it through with the intimate team that shared his vision for the animation.

“I know some people find the aesthetic combination unfamiliar,” he notes. “There’s only been a handful of films that have used it –- but it’s a style I’ve been a fan of for so long that it looks like a perfectly natural fit to me. Phil and I are also both of a certain age to have been deeply immersed in the tail end of the Fantasy boom in the mid-80s – He-Man, Conan, Dungeons & Dragons – and our shared interests on that front made for a very sympathetic joint creative process.” Gelatt and King’s partnership came about when King’s Exordium made its way into Gelatt’s inbox via another friend in the animation industry. For Gelatt, the email could not have come at a better time.

“At the time, I was feeling very annoyed at the state of the industry, and just had this unsettled feeling like I was never going to be allowed to make anything really strange and out there, anything that I really loved,” remembers Gelatt. “When I saw Exordium, I loved it. And it felt like exactly the type of fantasy film I’d want to make if anyone ever let me make it. So, I reached out to Morgan and said, ‘Let’s make something together. I don’t exactly know how we’ll do it, but I believe we can.’ And that launched us on this epic journey.”

He adds, “I have to confess that I had just seen the documentary Jodorowsky’s Dune and it had filled me with this kind of bravado, this idea that one should go out there and make the weird, arty stuff that one wants. If you aren’t trying to do that, after all, what is the point of being in this industry at all?”

So, Gelatt and King set out to make The Spine of Night, a film that, while inspired by the fantasy animations of years long past, aimed to redefine both the genre as a whole and also showcase the endless possibilities of animated storytelling, open to those willing to take the risk. King adds, “As a goal, we wanted to create a world where our protagonists weren’t powerful supermen shaping the world to their will, but more of a world where events turned on small actions from people passing briefly through the course of history; actions rooted in indecision, desperation, and failure. That means eschewing many familiar fantasy narrative beats – which is inherently interesting to me – and lend a sense of cosmic absurdity and horror to it all.”

Gelatt says he and King discussed, at great length, the well-worn fantasy idea of a single hero who will save the world and how it was “not a particularly honest or useful archetype,” and immediately began unraveling and complicating this concept to create heroes in The Spine of Night that emanate relatability based on their failures, rather than their successes.

“And I don’t mean that in a depressing way,” says Gelatt. “In fact, it’s quite the opposite. To look at stories about failure and loss but examine how the world moves on, how individuals move on from those moments, to me that is a great storytelling project, one that relates to all our lives and the world in general. To pick a very film-specific example, I’ve been reading Simon Callow’s enormous multi-volume biography of Orson Welles and his failures after Citizen Kane are so much more interesting to me than the making of Kane itself.” Between all the gore, diverse range of character groups, settings and seemingly endless variants of corruption, there’s been a lot of debate since The Spine of Night’s initial release about the film’s message. Is it about power abuse, current politics, racism, the seedy underbelly of humanity?

For King, it’s about all of that and more.

“I think, for sure, that The Spine of Night is about all of those things, to some degree, simply because the world we live in inevitably bleeds into the art that we make,” begins King. “I certainly didn’t want to shy away from the political concerns of this moment in time –- the re-emergence of fascism, and the racism inherent to that, the ecological devastation of the planet, and our seeming inability to collectively resist these existential threats. I think it would feel negligent to me if it didn’t.”

The director continues, “But, in a lot of ways, I think the joy of finding meaning for each member of the audience is a large part of what makes film such a powerful medium.” And for Gelatt, on top of the entertaining, startling, gripping, and satisfying aspects of The Spine of Night, the film’s true treasures are the discussions that the story provokes after credits have rolled.

“I am a very firm believer in trusting an audience to bring their own interpretation to a story,” he says. “I would say, if you see it in there, then it’s in there. I would also say about the fantastical genres – sci-fi, fantasy, horror – that while they are ostensibly about other worlds, they are also inevitably about the world in which they were created. I’ve always found it a bit silly when those genres are regarded as just escapism. Yes, you can escape into these other fiction worlds for a time but what matters is what you bring back from those worlds into this one.”

He adds, “I hope after they’re done talking about their favorite death in the film, we’ve given viewers food for thought and debate. I really hope this is a film that people argue about with their friends. Argue about its deeper meanings but also about its characters. Could Mongrel take on one of the bird assassins? What happened to Phae after she escaped the Pantheon? What does it mean that Tzod seems to have gotten that particular detail of the story wrong?”

Will Battersby, one of the film’s producers says this is one of the beauties of well-told fantasy, sci-fi and horror.

“It can be a simple story, or a metaphor,” he shares. “Personally, I’m pleased when people’s visceral response to this film also leads to thoughts about power structures and environmentalism and kicking arse.” In the long term, King and Gelatt dream that The Spine of Night also provokes conversation between anime creators and others in the industry about how that which is weird is wonderful and worth producing.

“I hope that it exposes people to just one of the infinite possibilities for weirdo outsider art that comes from supporting independent animation,” says King. “That’s certainly the creative spirit that made the Bakshi films so important to me. There are so many amazing, strange things happening in the world of independent short films, and it’s so profoundly rare that any of those artists get the chance to develop that work into something at a feature-length scale. If audiences seek it out and support it, the potential exists to transform the Western animation landscape into something much more eclectic, personal, and adult than what has been the norm for most of my life, and I think we’d all be better for it.”

With the increased blossoming of adult animation, King and Gelatt are optimistic about the future of films like The Spine of Night and, while there are no official plans in place as of yet, they look forward to the chance to possibly expand the world they’ve created even further.

“If the interest is there, we certainly have ideas for more stories to be told in this world,” says King. “I’d love to see what things look like a century or two after the events in the film’s finale, and the millennia of forgotten history before the film begins is ripe for exploration. The barbarian eunuch, Mongrel, was where this all started for me in the earliest short films, so doing more with him would be incredibly fun, if we had the chance.”