The Soothing Music Videos of Moon Panda’s ‘What On Earth’ 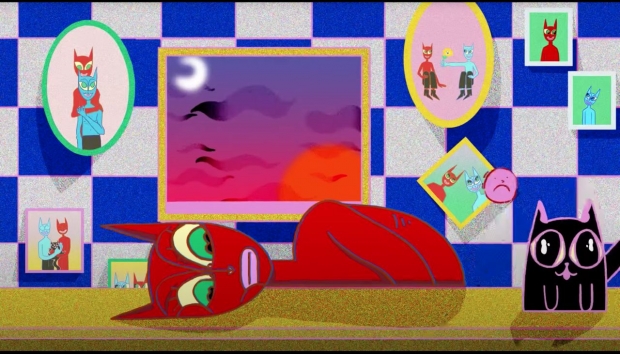 Earlier this month, celestial Danish-US dream pop duo Moon Panda (Maddy Myers and Gustave Moltke) released its debut album, What On Earth, via Fierce Panda Records – along with the focus single, ‘Anemone.’ The band’s whimsical and transcendental guitar pop, straddling the lines of dream pop, trip hop, and psychedelia, has been generating considerable acclaim. They head out this May on a UK tour – they debuted this month at SXSW.

Their debut album was written as a soothing response to the collective anxiousness so many around the world have felt - which also is reflected in their calming animated music videos. Amplifying the other-worldly quality to their music, Moon Panda has been pairing singles from the album with entertaining animation: “Vacationer” was produced with Simona Mehandzhieva, while “Cloud Watching” was done with Andrew Khosravani.

Moltke even learned how to animate so he could create the video for the single “Falling” himself. Describing production on the music video, he shares, “This is the first thing I’ve ever animated. I took the plastic off the iPad and started drawing this video - with no idea that it would be the thing I worked on for the next year and the music video for my favorite song from the album!” Moltke learned about animation as he produced the video, noting, “Throughout this music video, I was learning how to animate and use the software, and pretty much how to create a moving, living story - and I think when you watch it knowing that it becomes a part of the journey. It starts off really rough and sketch-like, and slowly evolves into more smooth, more intricate shifting angles and scenes.” “I drew almost every single frame, that’s about a couple thousand hand-drawn pictures, which unsurprisingly ended up taking longer than expected,” he continues. “I’ve always had so much respect for animators and that’s only grown since this process (shoutout to Andrew Khosravani, who’s animated 3 insanely cool videos for us, for being such an inspiration). The only rule I set for myself was that it would all be a one-shot, no cuts. It gives you a feeling of being sucked into the video and accentuates the feeling of falling. It was also a pretty crazy feeling to create a little man and his whirlwind of an adventure. After he jumps he starts a long chain reaction of mostly terrible events he has little to no control over. When he finally sees the donut, does he really have a choice but to eat it?”

Moltke never storyboarded the piece, opting instead for a more “stream of consciousness” feel. “It’s been the greatest to go full circle with this song, creating both the audio and visual,” he says. “I definitely plan on doing it again, but in the meantime, I hope this little voyage is meaningful for a few people. I know it has been for me.”

Referring to Mehandzhieva’s work on the Vacationer video, Moon Panda says, “With demonic characters and intensely saturated world, the animation sits somewhere in the same universe as Polly Nor and Adventure Time, with a dialed up use of striking graphics throughout.” In describing his work on the Cloud Watching music video, Khosravani explains, “To make the video, everything revolved around getting the concept right from the off. The song is so blissed out, and I wanted the visuals to reflect that, so the 'narrative' is incredibly loose and instead it is a series of vaguely connected vignettes.”

The artist, noting that instead of being character driven, the video’s prevailing theme is architecture and nature, adds, “Everything moves at a snail's pace, but that gives us time to reflect on the light bouncing off a statue, or the growth of a mushroom. Instead of focusing on a lot of character movement, we focused our energy on adding as much detail to the mundane as possible. I had the pleasure of collaborating with Spanish 3D animator Álvaro Pérez, who created some of the video's best scenes, taking my sketches and making them a reality. I think his work really pushed this video to the next level and added a complexity I could never have achieved alone.”