‘Sing 2’: Getting Ready for the Big Time

In Garth Jennings’s new animated musical, Buster Moon and his all-star cast of performers return, ready to unleash their biggest extravaganza yet… with one small hitch – overcoming the fear of not being good enough; sequel to Illumination's 2016 hit ‘Sing’ arrives in theaters today, December 22. 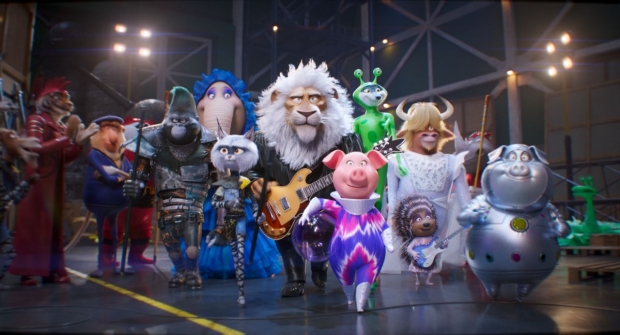 From Vampire Weekend to Radiohead and R.E.M., Garth Jennings has spent most of his video production career capturing the identities and emotions of musical geniuses. Inspired by the works of Michel Gondry and Spike Jonze, Jennings, after nearly 30 years of directing music videos, took a rather unexpected turn almost a decade ago when asked to co-direct Illumination Entertainment and Universal Pictures’ animated feature Sing, alongside Christophe Lourdelet.

“Chris had seen a film of mine called Son of Rambow, which is neither animation nor musical,” remembers Jennings. “But he obviously saw something in it. I should really ask him why. But he met with me to talk about the idea of Sing and I immediately loved it. We both love films where the singing and the music is part of the characters’ lives rather than just a burst into song.”

Nominated for Best Original Song and Best Animated Motion Picture at the Golden Globes, Sing’s story and fresh beats received plenty of positive attention from viewers and critics. Now, four years after Sing’s 2016 release, Sing 2 is prepped and ready to make an even more dazzling debut.

Produced once again by Illumination Entertainment and Universal Pictures, Sing 2 hits theaters today, December 22, with Jennings returning as director and writer, as well as voicing the role of a quirky iguana, Miss Crawly. “We asked so much more of every department this time around,” says Jennings. “There’s a wide age range in the groups that come to see these films and I want them to feel like they’d just been to the best show they’d ever seen. That’s what Buster is trying to do in the story and that’s also what we’re trying to do. We really want to give you your money’s worth because that’s our job.”

Having overcome their fears and now dancing and singing loud and proud on their own home stage, characters Rosita (Reese Witherspoon), Ash (Scarlett Johansson), Johnny (Taron Egerton), Meena (Tori Kelly) and Gunter (Nick Kroll) – led by producer Buster Moon (Matthew McConaughey) – believe they are ready for big-time show business and deserve a shot at performing at music Mecca, Redshore City. But after failing to impress a talent scout, Buster winds up sneaking his performers into an unscheduled tryout in front of entertainment tycoon Jimmy Crystal (Bobby Cannavale).

In a moment of panic, desperate to see his singers succeed, Buster promises Jimmy an elaborate science fiction musical featuring acclaimed, but estranged, musician Clay Calloway (Bono). There’s just one problem, no one has heard from or seen Clay in 15 years. Thus begins an all-new set of lyrical – and personal - journeys where Johnny learns to stand up to his bully of a dance instructor, Meena discovers romance, Rosita battles imposter syndrome, Ash plays a key role in leading Clay out of his emotional darkness, and Buster aims to create the most ambitious spectacle of his career. The result is a wildly, spectacular, galactic production, with wacky colored aliens, samurai sword fights, enchanting love songs, and a trip through the stars. The film’s final act reveals these characters at their best… and some of the most stunning 3D animation we’ve ever seen.

“It was a lot of work as you can well imagine,” notes Jennings. “But it was all fueled by this amazing enthusiasm from every department. Everyone had to go above and beyond what we'd done before. But when we laid out what the plan was for the show, everyone could see why it was worth this enormous amount of effort and how it wasn't just spectacle but was emotionally serving every character’s story.”

He adds, “Doing music videos, I’ve learned a lot about rhythm and timing and the importance of music and picture working together. But the best stuff was where you couldn't separate the message from the music and vice versa. When those two things match together, it's magic. And certainly, with the Sing movies, it's been about making sure the music and the pictures serve each other emotionally as well as being entertaining or a great song.”

While Jennings' time making music videos served him well in designing the look and performances of Sing 2, he says that it was his transition from music videos to feature films that prepared him for creating a story that revolves around believing in one’s art and in one’s dreams. “Moving myself and my family to Paris [to direct Sing], where I didn't speak the language, was tricky, and I found the first year of learning the ropes at the studio incredibly challenging,” remembers Jennings. “For 20 years, I'd always worked with the same people and now it was like starting from zero in a whole new world. There were several times that first year where I thought, ‘Have I bitten off more than I could chew?’ Which is similar to how Buster feels in the film, where he thinks he’s gone too far and maybe should have stayed at home.”

“There's a lot of people saying you're not going to make it and you're not good enough,” he continues. “There's always a gap between where you are and where you want to be and the only way to close it is through believing you can do it, because the thing you believe in, the story you're going to tell, keeps reminding you that it's worth it. It's no different than Ash saying to Clay Calloway, ‘Your songs will carry you.’ If you just focus on the thing you’re doing, that will carry you. It might sound like I’m getting over the top here, but it’s funny how much these things are true.”

Jennings says that as much as he believes it’s the mantra of every artist – be they musicians, filmmakers, or the like – to want to get to the next “pinnacle” in their career, the fear of not being good enough is also their torch to constantly carry.

“You're always facing some kind of fear,” says Jennings, who has now directed two live-action and two animated feature films. “Even now, I’m always coming up against things that make me worry I'm out of my depth. But I love the work so much and that’s what propels me forward. I was only supposed to be in Paris for two years and now here we are nearly nine years later, and it's all been the most extraordinary adventure.” It’s a weighty choice, for artists to put their hearts and souls on the line every day for the sake of their crafts. But Jennings’ hope is that Sing 2 can leave audiences with one emotion: joy.

“When that curtain goes up at the end, and they all take each other's hands, and they finish their show, and they walk out together, I hope that the audience feels that they've been through this experience too,” he says. “And I hope they take away the same joy that the cast feels having completed this journey. I want people to not just have a great time watching the film, but also carry that joy away with them.”

Taking an Old-School VFX Approach in ‘All Quiet on the Western Front’
‘Natural Habitat Shorts’: Like ‘Ranger Rick,’ But for Adults
Framestore Sets Sail on ‘1899’ with New Virtual Production Tools
Animated Characters: The Art of Babbitt – Part 1
Bruce Smith and Ralph Farquhar Talk ‘The Proud Family: Louder and Prouder’ Season 2
VFX is the ‘Thing’ for Tom Turnbull on Tim Burton’s ‘Wednesday’
We Need to Chat
F is for Flake: The (Not So) Great Animation Robbery?
END_OF_DOCUMENT_TOKEN_TO_BE_REPLACED