The producer on Nickelodeon and Mattel’s new CG-animated series discusses the rebirth of the storied franchise, which began as a hugely successful toy line in 2010, quickly expanding into games, a web series, and animated YouTube shorts; the show premieres today, October 28, on Nickelodeon. 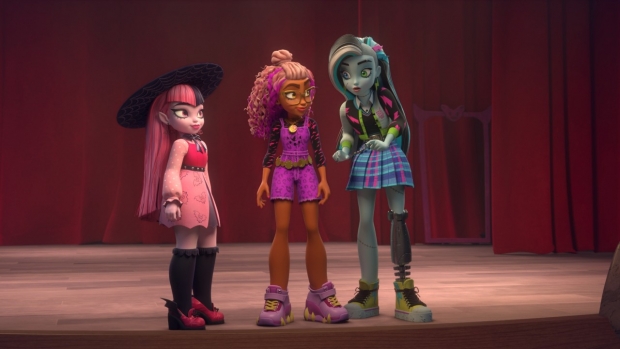 First came the dolls, then the YouTube shorts sensation, then video games, young adult novels and more dolls. Most recently, Mattel partnered with Nickelodeon to produce a CG-animated, 52-episode series Monster High, which releases on the network today, October 28.

The revamped series follows teenage monsters – including Clawdeen Wolf, Draculaura, Frankie Stein, and Deuce Gorgo – as they discover who they are, embrace their differences, and learn to be fierce and fearless at the one place they all belong: Monster High. It’s a big moment for Mattel, as the series marks an official revamp of the franchise, which has been on hiatus since 2018.

The Monster High franchise, which started with Mattel’s fashion doll toy line in 2010, was as quick to rise. Within the first two years, the dolls sparked a web series, Japanese animated shorts, a Wii and Nintendo video game and a book series. In only four years since their debut, Monster High dolls became the second best-selling doll brand next to Barbie.

Nothing new had been developed for the franchise since the doll line was discontinued in 2018. That is, until 2021, when Mattel Television announced it would produce a live-action musical film and an animated TV series for Nickelodeon, directed by Disney animator and The Boss Baby: Back in the Crib director Matt Whitlock, and co-executive produced by DC Super Girls’ Shea Fontana. Fontana has produced series inspired by other Mattel toy lines, such as Polly Pocket, but this is her first time, as she puts it, “in a very monster-focused space.” We talked with Fontana about her goals for the revamp, the underlying success of Monster High, gender and cultural representation in the show and, of course, monster puns.

Victoria Davis: You've also worked on shows like DC Super Girls, Polly Pocket, Doc McStuffins, and a ton of other female-centric programming for preschool and teen viewers. What are the things you look for in a series, or what did you see in scripts for these shows, that bring girls to the forefront in a way we haven't often seen in entertainment?

Shea Fontana: I have been very lucky to be part of the cartoon age where girls do get to be the leads. When I was growing up, there weren't very many girls in animation. Whether it was Ninja Turtles or whatever the show was, there was usually a group of boys and then there was one girl. So, I felt very fortunate, as I got started in animation, that we started to see a shift of the tide there.

As I'm looking at new content I want to get involved with, there are always the questions of, “Whose story are we telling? And how is this character new and interesting and different than something we’ve done before?”

VD: In the case of Monster High, what was it about Clawdeen Wolf and her friends that made them different from characters you've worked on in the past? SF: The Monster High franchise, from when it started in 2010, had such a beautiful message to it, which was though we all feel like monsters in high school, and we've all had this experience of being the outsider, Monster High is a place where everyone is truly accepted, and they belong. It was a beautiful metaphor intrinsic in Monster High. And with these characters, though we do have a lot of leading females, we have a lot of other genders represented as well.

VD: When it comes to representing the wide spectrum of genders in an animated show there’s a lot more responsibility on you as the producer versus a live-action show where you’re really trusting the director and actor to portray that character in the right way. But in this series, you've really got to show who these people are through their animation. I've talked to Chris Nee and Elizabeth Ito about this, who have both have created shows that feature gender-neutral or gender-fluid characters and I'm curious about how you even go about representing gender diversity in characters that are also complex monsters?

SF: We want to expand the range for the kind of kids that see themselves represented on TV, and gender is one of those things we wanted to expand the definition of so kids everywhere can see themselves in our series. One of our characters, Frankie Stein, is non-binary, and it was really about making sure we were looking at Frankie as an individual and not just an idea. They needed to be a fully formed character beyond their gender identity.

The characters needed to be authentic, as well as diverse. So, we looked to all the people on our crew who identify as non-binary and they brought their stories to this as well. But I think one of the biggest strengths that we've had as a show is complete support from Nickelodeon and Mattel from the first time I handed them the script where Frankie introduces themselves with they/them pronouns.

Going in, I was like, “I'm ready to do this fight.” And then everybody was like, “Yeah, let’s do it!” and that was a weight off my shoulders, knowing that we had the support of the executives and the companies behind this. We also have a couple of cultural consultants that we share everything with to make sure we aren't falling into any stereotypes and that any of our blind spots are being checked along the way.

VD: I imagine it’s a wide range, but what types of cultural consultants work on the series besides gender representation?

SF: We have a lot a lot. Coach Thunderbird is a character that we're bringing into this season, and we run that character through our Native American consultant. With Cleo de Nile’s mummy memorabilia, we have an Egyptian consultant. So we have an overall consultant for the show that we work with through, Talk to Jess, but we look for specific consultants as we're going along with the stories. VD: Were there any other unique challenges with this series?

SF: It's certainly unique that we're doing such a huge co-production between Mattel and Nickelodeon. And it's been really exciting to see how the different departments have worked together and how that cooperation came to life. But that definitely has its challenges, because you do have a lot of different departments talking to each other. But, as we’re rolling out the first episodes, it's exciting to see that we did it! Everything’s done. We figured it all out.

VD: As you’ve said, this franchise has had a decade-long standing fan base going back to 2010. So what did you want to do differently with this reimagining of an already successful Monster High?

SF: We’re resurrecting the characters in a whole new way, rethinking backstories, but trying to maintain the things that people love about these characters and that people really connected with. We’re just finding new spins and ways to push diversity.

The original series, those were just shorts on YouTube. So a lot of the characters were really surface-level developed. Now, instead of having six minutes of content, you have full episodes and a 52-episode season to get into all these characters. That was a joy, to jump deeper into each of the characters that we didn't get to see enough of in the original Monster High content.

VD: And what features from the show did you want to keep the same?

SF: The original Monster High was always looking for ways to push the monster comedy, which is something we absolutely still strive for. So, it really is the fun of Frankie falling apart, what we can do with Draculaura in her bat form, or Claudine and her werewolf skills. It’s fun to get into all those monster-isms. And I think the thing that Monster High originally did better than anybody else ever is the puns. VD: With shows like these, you can get a wider range of audiences, from really young kids to teens and even older viewers who were fans back in 2010. What do you hope everyone who’s watching this, no matter their age, takes away from the show?

SF: This is the first time that I've gotten to play in a very monster-focused space. So it's really exciting that we do get to have those spooky moments and those jump scares alongside the really heartfelt stories.

I just want kids to be able to connect to our monster characters in an honest way. Which is why, as we go into every story, we're really looking for that honest, universal truth that we want to make the story about. And, if kids get a little something that they take with them for the rest of their lives, I would be so incredibly honored. But I'm also so happy to just make kids laugh for eleven minutes at a time.

VD: I suppose those monster puns will be with them for the rest of their lives, don’t you think?

SF: Oh, definitely. You can't get rid of them once you’ve heard them.