The Sharp, Edgy Designs of ‘Kipo and the Age of Wonderbeasts’ 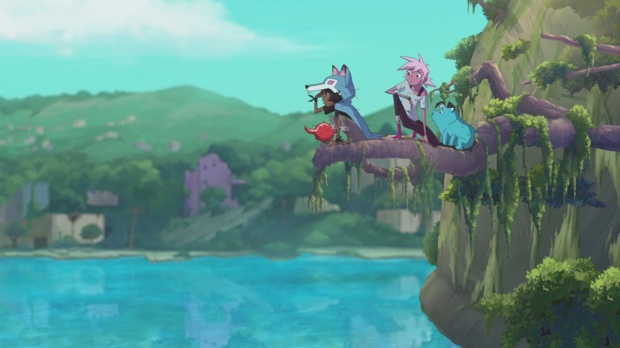 Glowing disco bees, four-eyed pigs, forests on the backs of gigantic turtles, and neon-lit burrow cities are just a few of the beautiful oddities that make up the world of Bill Wolkoff’s and Radford Sechrist’s whimsical adventure series, Kipo and the Age of Wonderbeasts.

Streaming on Netflix, DreamWorks Animation’s 3-season, 2D adaptation of Sechrist’s 2015 webcomic follows a young girl named Kipo, who finds herself far from home in a post-apocalyptic, but fantastical world shrouded in colorful botany and filled with larger-than life, and musically-inclined, animals. Upon meeting a child named Wolf, Kipo begs the young kid to help her navigate through this exciting but dangerous world and return to her underground home. Along the way, Kipo discovers beastly powers within herself and joins Wolf and her other above-ground friends to defend this magical place against a power-hungry primate.

“They explained to me that they were imagining an Alice in Wonderland cartoon version vibe mixed with The Walking Dead,” says series art director, Angela Sung, known for her work on The Legend of Korra and Motorcity. “I really liked this idea, and I knew it would work really well with the art style I personally adore.”

“Visually, Kipo has such a unique voice,” says Bridget Underwood, one of the show’s directors, who had worked with series co-creator Sechrist on Netflix’s upcoming animated feature, Wish Dragon. “Rad's style set a look and feel for the show that hasn't really been seen in Western TV animation yet. And Dan Holland's character design work and Ang's art direction really elevated the whole project to a new level.” Kipo’s animation features sharp lines and bold hues for the characters alongside watercolor-like backgrounds, with glimmers and dyes that melt into each other to create a vast space with seemingly no end. According to Sung, her primary responsibility was to create an awesome world where both designers and painters had a lot of creative and explorative freedom to design environments that were “imaginative yet believable.”

“A lot of my color decisions were inspired by my traditional painting practice,” Sung explains. “I’m a big fan of playing with color relationships to make an image interesting. The painters on the team were all quite good at traditional painting as well, and quickly grasped the style and began to play around with pushing colors, making bold decisions. I was constantly amazed by their work.”

Sung and her team created group plein-air paintings with gouache or oil paints during their spare time to build a deeper connection to the natural environments around them, as well as inform their understanding of color and light. They also turned to classic Japanese anime for inspiration. “I looked into films with amazing layouts, such as Ghost in the Shell and Akira,” she shares. “I believe that strong fundamentals lead to strong layouts, and strong layouts make the final paintings awesome, and more believable.” Both Ghost in the Shell and Akira are stories that take place within unconventional city spaces, where the buildings are old and worn down. But the settings also harbor almost-mythical ideas around advanced technology and hybrid beings. Though Kipo’s scenery is deeply rooted - pun intended - in nature and wildlife, the idea of beauty growing wild in old, partially destroyed places is prevalent in all three animations.

“We made sure to include some recognizable buildings, that were inspired by Los Angeles, to give it a sense of realism,” Sung says. “Then we altered the space by adding overgrown vegetation with colorful looks to make it way more interesting. But there are so many different art styles that help build all sorts of ‘out-there’ worlds, and different art styles trigger different problems for artists to solve.”

Underwood says anime and Japanese monster films also came in handy as inspiration. The production was constantly challenged to design characters and creatures that could have come right out of a Shonen universe; they also had to fit in with the already-funky human characters on the show.

“The show's character style was really graphic and illustrative, and often scale and proportions on characters - especially non-humans - were super pushed,” they note. “It was tricky learning to maintain that type of style through all the action and acting. Not to mention learning how to work with and frame the mega-mute characters. I spent a lot of time looking at Kaiju and Evangelion references for that stuff.” While both Underwood and Sung acknowledge Kipo was “an extremely ambitious project,” it’s the playfulness of the show’s world, in both anime-inspired aesthetics and a heartfelt story filled with twists and turns, that makes it a wonder among American animations. “Almost nothing was too weird to fit in,” says Underwood. “And the board teams were always racing to try and realize these big adventure episodes on a tight schedule.”

“The edgy art style, bold colors, and quality of the work definitely set the show apart, but the lesser-known fact about production design is that you are not just creating beautiful images, you’re trying to understand the story and apply those ideas to enhance everything,” adds Sung. “The original story has a world with a diverse group of people, and it also showcases the beautiful diversity of creatures on this planet. I really enjoyed how harmony was created at the end of the series, despite the differences between each group. And I felt like our own crew was like Kipo’s gang the whole time - figuring things out slowly, but making it come together at the end.”