‘The Sea Beast’ Delivers a ‘Monster’ of an Adventure

Creators of the new CG-animated tale, including Oscar winner Chris Williams, talk about how a commitment to visual realism and nuanced storytelling helped shape their epic, seafaring tale, now screening in selected theaters and streaming on Netflix. 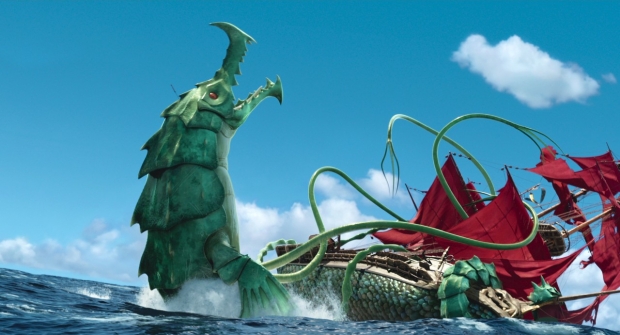 When you’re a monster hunter in command of a fabled ship, and you’ve been given a final chance to hunt down and kill a ferocious red sea creature known as the Bluster, the last thing you want to deal with is a young stowaway who’s run away from her orphanage in search of adventure. Yet, that’s the position in which the legendary – and ruthless – Captain Crow (Jared Harris) finds himself, as he, his first mate Sarah Sharpe (Marianne Jean-Baptiste), and his adopted son Jacob Holland (Karl Urban) embark on an epic journey that ultimately will change their lives and alter the course of history.

Helmed by Academy Award winner Chris Williams (Big Hero 6, Moana), in his first solo directing gig, and produced by Williams (who also co-wrote the script) and Jed Schlanger (How to Train Your Dragon: The Hidden World), The Sea Beast is a fun, family-friendly computer-animated adventure that breaks new ground not only in its rethinking of conventional maritime narratives, but in its painstaking attention to detail (think ropes), which imbues the film with a remarkable sense of realism.

“We looked at a lot of action films, like Peter Weir's Master and Commander, for the realism of living on a tall ship, and there was a lot of traditional art that we used as inspiration,” says production designer Matthias Lechner. “When I arrived, Chris had a lot of N. C. Wyeth's paintings on his wall, and the way he draws clouds and sails is just spectacular. I really wanted to try and use old vibrant colors in natural settings in the look of our film. We set out to find the perfect balance between realistic style and keeping the fun and the charm of classical animation movies.” Williams, whose work on Moana taught him that “even a handful of ropes can be a big challenge,” knew that they were making an ambitious film, but he was reassured by the fact that Sony Pictures Imageworks would be handling the effects.

“We knew they were one of the few studios that could take on something like this,” he says. “They'd proven themselves in many other movies. Spider-Verse is obviously stylistically very different than what we were going after, but if they could do that, we knew they could do what we wanted. We talked about things like Lord of the Rings and Game of Thrones – movies and series that made you really believe in the world that you were inhabiting. We wanted to live in a world that took itself seriously and we knew that that would be a big part of the experience of watching the movie.”

As for narrative innovation, the presence of the young stowaway, Maisie Brumble (Zaris-Angel Hator) – an orphaned Black girl – introduces not only an unusual perspective, but a thematic richness that expands the conventions of the traditional sea adventure. As producer Schlanger observes, while the character herself is a great dramatic element, the filmmakers were extremely lucky to get Hator to portray her. “With Maisie, we were trying to establish a character who’s bright, determined, and strong, but is still an actual child – someone who’s questioning fundamental things in her life and her thinking,” he shares. “So it's a very sophisticated arc. When we met Zaris for the first time, she gave us glimpses of what Maisie could be. And then, when we started to record with her, we realized that we were dealing with an actress who was sophisticated beyond her years. Zaris' ability to provide such a layered approach really pushed this character in a compelling way. She has all this strength, but she's also still so vulnerable, and Zaris was able to find those layers and keep them honest and so truthful.”

Apart from wrangling a whole lot of virtual ropes and ensuring the accuracy of such details as the little metal loops in the backs of the hunter's belts, Williams and Schlanger also had to contend with the sprawling scope and complexity of the story. From battles with monsters, to intimate scenes between Maisie and Jacob, to a massive bar scene with 300 people, the creators had their hands full keeping track of everything and bringing coherence and flow to the proceedings.

“This movie is so complex,” says Schlanger. “There are so many things that are happening at the same time and we're trying to leave the audience with this breathless, almost edge-of-your-seat feel for the whole movie. So, to really feel that we were hitting those things, hitting our moments correctly, and then letting that story carry you to that next beat without it seeming like, ‘Oh my God. Here's another reversal. Here's another thing that's happening to our characters.’ Just keeping the world alive as we move through the story was one of the biggest challenges on the film.” “As the director, I really had to keep my eye on the pace and the feeling in this big sprawling story,” affirms Williams. “Because we have these massive spikes of action – where I really wanted to go all the way – but then it was important to bring it down, and have these little moments and really let them breathe a bit, which would then set you up for another big spike.”

Outside the world of the film, Williams and Schlanger faced a different kind of challenge. Having previously worked within the well-integrated structure of a studio – Williams at Disney and Schlanger at DreamWorks – assembling a team and adapting to the more fluid environment of Netflix Animation was a bit of an adjustment.

“It was a huge learning experience, because I really only worked at one place for almost 25 years,” Williams says. “And I worked with a lot of the same people, movie after movie and year after year. I left on good terms and I still have great friends there, but I was concerned that I would get too complacent if I stayed in one place.  I think it's nice to mix things up, to just throw yourself into an uncomfortable situation. Initially it was just me, getting a whole bunch of people together. And I realized that one of my big responsibilities was getting everybody comfortable with each other, and letting them know that we had to be truthful with each other and challenge each other, in order to build the kind camaraderie that I felt when I was at Disney.” “At Netflix, we really built everything from the ground up,” says Schlanger. “So, our art department, our story team, our editorial team and our previsualization team were all housed at Netflix. And then, those blueprints that we created through story and through previs and art all got sent to Sony. At first, it was a little daunting, because you're used to a different way of working. But we had a lot of trust in Imageworks, and when they started to see the reels, their excitement really grew, and we felt like we had a real connection. So, it never felt super-separated. It really felt like we were all one big team.”